The nature of specimens to be collected for bacteriological investigations of S. pyogenes infections depends upon the disease manifestations.

The nature of specimens to be collected for bacteriological investigations of S. pyogenes infections depends upon the disease manifestations. The frequently used specimens include:

·           A frozen section biopsy obtained in the operating room may be used in cases of suspected necrotizing fasciitis.

Gram staining of pus or exudate is a rapid and presumptive diagnostic procedure for S. pyogenes infection of skin and soft tissues. The presence of Gram-positive cocci in pairs 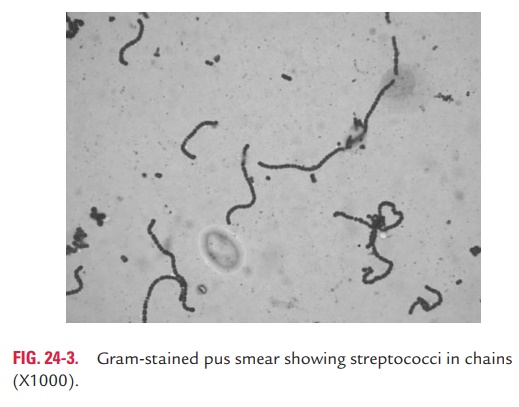 and chains (Fig. 24-3) in association with leukocytes is sug-gestive of streptococcal infection. This is because S. pyogenes are not found as normal flora on the skin surface. However, demonstration of streptococci in respiratory specimens from a patient with pharyngitis by Gram staining is of no value, because the streptococci are found as part of the normal flora in the oropharynx.

Throat swab culture is the most specific method for diag-nosis of streptococcal pharyngitis. Ideally, the throat swab specimen should be collected from tonsils and posterior part of the oropharynx because more number of bacteria are present at this site than in the anterior part of mouth. After collection of the specimen, they are plated immediately on the blood agar plate, and in case of delay they are sent to the laboratory in Pikes transport medium. In laboratory, the specimens are inoculated on a 5% sheep blood agar and incubated at 37°C aerobically in the presence of 5–10% CO2 for 2–3 days.

Culture of the swabs on blood agar shows a clear zone of beta-hemolysis (Fig. 24-2) surrounding the small translucent to opaque colonies.. 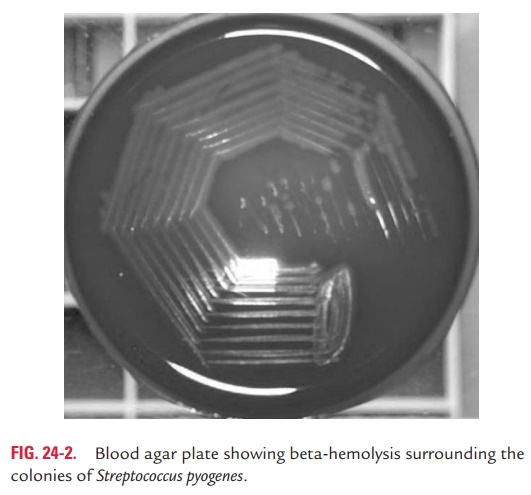 Bacitracin sensitivity test: S. pyogenescan be distinguishedfrom other streptococcal groups by their sensitivity to bacitracin. In this method, a filter paper disc containing 0.04 U of bacitra-cin is applied on the surface of an inoculated blood agar and is incubated overnight. Any zone of inhibition around the colonies confirms the presence of S. pyogenes (Fig. 24-4, Color Photo 16). Bacitracin test is simple to perform and is useful for presump-tive identification of S. pyogenes. It is positive in more than 95% of S. pyogenesstrains and negative in nongroup A streptococci. 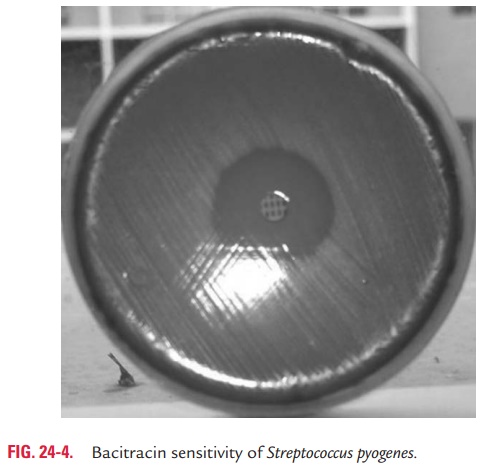 Direct antigen detection test: Detection of group-specificcarbohydrate antigen A directly in the throat swabs by direct fluorescent antibody test is a very rapid and specific method. The result for this test is obtained within 4 hours. The test is as specific as culture but is less sensitive.

Serological tests are of value in the diagnosis of AGN and rheu-matic fever. These tests detect high level of antibodies produced against many streptococcal antigens. The tests detecting anti-bodies against SLO (anti-SLO, or ASO antibodies) are most frequently used for confirming rheumatic fever and AGN. The ASO antibodies appear in serum 3–4 weeks after initial infection by S. pyogenes. A titer of more than 200 indicates streptococcal infections. Higher antibody titers are found in acute rheumatic fever, whereas they are not raised in patients with glomerulone-phritis and streptococcal pyoderma. Antibodies against other streptococcal enzymes, such as DNAase B (anti-DNase B anti-bodies), hyaluronidase (anti-hyaluronidase antibodies), and streptokinase (anti-streptokinase antibodies) are also demon-strated in S. pyogenes infections. The demonstration of antibod-ies against these antigens may prove useful in the diagnosis of streptococcal pharyngitis and pyoderma.