S. Typhi is an invasive bacterium. It colonizes the human intestine and, under specific conditions, directly invades the intestinal mucosa or multiplies for several days within the mononuclear phagocytic cells in the liver, spleen, lymph nodes, and Peyer patches of the ileum before invasion.

S. Typhi is an invasive bacterium. It colonizes the human intestine and, under specific conditions, directly invades the intestinal mucosa or multiplies for several days within the mononuclear phagocytic cells in the liver, spleen, lymph nodes, and Peyer patches of the ileum before invasion. The bacteria subsequently enter the blood stream and cause the disease manifestations.

Virulence factors of salmonellae are complex (Table 32-3). These are encoded both on the organism’s chromosome and on large (34–120 kDa) plasmids. 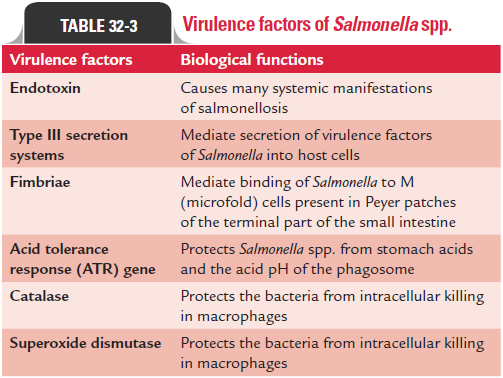 Endotoxin: Endotoxin is responsible for many of the systemicmanifestations of the disease caused by Salmonella spp.

Fimbriae: The species-specific fimbriae mediate binding ofSalmonella to M (microfold) cells present in Peyer patches of the terminal part of the small intestine. These M cells typically transport foreign antigens, such as bacteria to the underlying macrophages for clearance.

Enzymes: Catalase and superoxide dismutase are theenzymes that protect the bacteria from intracellular killing in macrophages.

The severity of disease in individuals infected with salmonellae is dependent on the virulence factors of the infecting strain as well as on the human host.

Infective dose: The infection is acquired by ingestion of foodor water contaminated with salmonellae (Fig. 32-3). The infec-tive dose (ID50) in human volunteer experiments has been found to be about 103–106 bacilli. Although the infectious dose varies among strains, a large inoculum is necessary to overcome stomach acidity and to compete with normal intestinal flora. Large inocula are also associated with higher rates of illness and shorter incubation periods. However, lower infectious doses may be adequate to cause infection if:

·           these organisms are coingested with foods that rapidly transit the stomach (e.g., liquids) or that increase gastric pH (e.g., cheese, milk);

·           these bacteria are ingested by individuals with defective immune systems.

On reaching the intestine, the salmonellae attach themselves by fimbriae or pili to cells lining the ileal mucosa. The bacteria selectively attach to specialized epithelial cells (M cells) of the Peyer patches. Salmonella TTSS mediate the initial invasion of S.Typhi into the intestinal mucosa. SPI-1 introduces Salmonella-secreted invasion proteins (Sips or Ssps) into the M cells result-ing in membrane ruffling. The ruffled membranes surround and swallow salmonellae, leading to intracellular replication in the phagosome with subsequent death of host cells and spread to adjacent epithelial cells and lymphoid tissue. An ATR gene also protects Salmonellaspp. from stomach acids and the acidic pH of the phagosome. Catalase and superoxide dismutase are other factors that protect the bacteria from intracellular kill-ing. The bacteria are then transported within phagosomes to the lamina propria, where they are released. In the lamina pro-pria, typhoidal strains of salmonellae induce production of macrophages, while nontyphoidal strains induce production of neutrophils (nontyphoidal strains). Subsequently, S. Typhi and other virulent Salmonella strains invade deeper tissues via lymphatics and capillaries and elicit a major immune response. The organisms travel from the submucosa to the mesenteric lymph nodes, multiply, and then enter the blood stream via the thoracic duct (transient primary bacteremia) to spread to other tissues.

During this bacteremic phase, the bacteria may invade any organ but most commonly are found in reticuloendothelial tissues of the liver, spleen, bone marrow, gallbladder, and Peyer patches in the terminal ileum. The gallbladder is infected via the liver, and the resultant cholecystitis usually is subclinical. The infected bile renders stool cultures positive. Preexisting gallbladder disease predisposes to chronic biliary infection, leading to long-term fecal carriage.

Invasion of Peyer patches occurs during either the primary intestinal infection or secondary bacteremia, and further spread of bacteria occurs through infected bile. The Peyer patches become hyperplastic with infiltration of chronically inflamed cells, which may lead to necrosis of the superficial layer and ulcer formation, with potential hemorrhage from blood vessel erosion or peritonitis from transmural perforation.