The cell wall of salmonellae like any other Gram-negative bacilli contains a complex lipopolysaccharide (LPS) structure.

The cell wall of salmonellae like any other Gram-negative bacilli contains a complex lipopolysaccharide (LPS) structure. The LPS is liberated during lysis of the cell and to some extent during culture. The LPS moiety functions as an endotoxin and is an important component of the virulence of the bacteria. The LPS complex consists of three components: (i) an outer O poly-saccharide coat, (ii) a middle portion (the R core), and (iii) inner lipid A coat. The LPS of salmonellae is important because of the following reasons:

The repeating sugar units in the outer O polysaccharide chain are responsible for O-antigen specificity. This also helps to determine virulence of the bacteria. Salmonella strains lacking the complete sequence of O sugar repeat units are known as rough strains. They are so called because of rough appearance of the colonies. The rough strains are less virulent or avirulent than the smooth strains, which have a full complement of “O” sugar repeat unit.

The endotoxin component of the cell wall is important in the pathogenesis of Salmonella infections. Endotoxins cause fever, activate the serum complement kinin and clotting systems, and depresses myocardiac functions. The circula-tory endotoxin is also responsible in part for development of septic shock that can occur in systemic infection.

O or somatic antigen: O antigens occur on the surface ofthe outer membranes and are determined by specific sugar sequences on the cell surface. O antigen is an LPS complex and is an integral part of the cell wall. It is heat stable, resis-tant to boiling up to 2 hours and 30 minutes. It is also alcohol stable, resistant to treatment with 96% ethanol at 37ºC for 4 hours and is also resistant to 0.2% formaldehyde. This antigen can be extracted from cell wall by treatment with trichloroace-tic acid. Treatment with phenol removes the antigenicity but retains the toxicity of the bacteria. Antigen is less immunogenic than H antigen. Generally, the O antibody titer produced after infection or immunization is lower than that of H antibod-ies. The O antigen is not a single factor but a mosaic of two or more antigenic factors. Salmonella are classified based on the presence of characteristic O antigen on the bacterial surface.

Till now, 67 “O” antigens have been described. On the basis of the somatic antigens, Salmonella has been classified into 46 “O” serogroups.

Surface antigens: These include (a) Vi antigen, (b) M and Nantigens, and (c) F antigens, and are discussed below.

Vi antigen: Vi antigen is a surface antigen overlying the “O” anti-gen. Felix and Pitt, who first described this antigen, believed that it was related to virulence and gave it the name ‘Vi antigen.’ It is analogous to the K antigens of coliforms. The antigen is present only in few serotypes, the most important being S. Typhi. This antigen is also present in some strains of Salmonella Paratyphi C, Salmonella Dublin, and Citrobacter freundii. The presence of thisantigen on the surface renders these bacteria inagglutinable by their specific O antiserum but agglutinable by Vi antisera. The Vi antigen is heat labile and is destroyed by boiling within 1 hour. Vi antigen is also destroyed by treatment with phenol hydrochloric acid and 0.5 sodium hydroxide, but the antigen remains unaffected by 0.25% formaldehyde or alcohol. The Vi antigen is lost on serial subculture.

M and N antigens:These antigens are present on the surface ofbacteria and are polysaccharide in nature. These antigens pre-vent agglutination by O antiserum. Boiling for two and half hours destroys these antigens. The presence of M antigen is responsible for mucoid nature of Salmonella colonies.

F antigen:These antigens are present on the fimbriae. Theyoccur in two phases: one with F antigen and the other without F antigen.

OH–O variation: Flagellated salmonellae (OH) sometimesgive rise to nonflagellated (O) strains. This variation known as OH–O variation is associated with the loss of flagella. When salmonellae are grown on agar containing phenol (1:800), fla-gella are not formed. This change is phenotypic and temporary because flagella reappear when the strain is subcultured on media without phenol. The loss of flagella is usually not total but there is only a decrease in the number of flagella and the quantity of the H antigen. Flagellated bacteria are also found in small numbers in such cultures. Subculture in Craigie’s tube (Fig. 32-1) is used to obtain a population of flagellated bacteria from such cultures. In Craigie’s tube method (Fig. 32-2), a wide tube containing semisolid agar (0.2%) is used. A short, narrow tube, open at both ends, is placed into the agar of the tube in such a way that the upper end of the tube projects well above the agar. The bacterial strain is inoculated into the inner tube, and after 8–16 hours of incubation, subcultures made from top of the agar outside the central tube yield a population of motile cells. 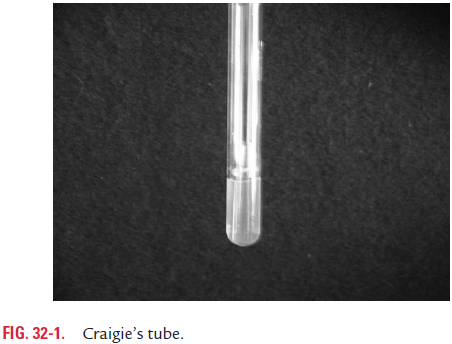 A U-tube of soft agar instead of Craigie’s tube may be used for the purpose, in which inoculation is made into one limb and subculture is taken from the other.

Rarely, salmonellae may lose their flagella by mutation. S. Typhi 901-O strain is an example of a stable nonmotilemutant, which is used for the preparation of O-agglutinable bacterial antigen suspensions for use in Widal test and other serological tests. 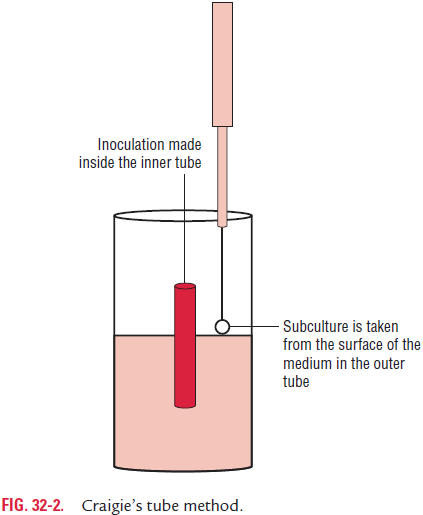 S–R variation: The smooth-to-rough (S–R) variation occursdue to mutation and is associated with the (i) change in the colony morphology from smooth to rough, (ii) loss of the O antigen, and (iii) loss of virulence. The rough colonies become large, rough, and irregular and are autoagglutinable in saline. These colonies show a defective capacity to synthesize O anti-gen. Conversion into rough forms occurs rarely in nature but is common in laboratory strains maintained by serial subcul-ture on ordinary media. The smooth S–R variation may be pre-vented to some extent by maintaining cultures on Dorset’s egg media or by lyophilization.

Phase variation: The flagellar or H antigens of most salmonel-lae occur in two alternate phases: phase 1 and phase 2. Phase 1antigens are either specific for a serotype or shared by a few spe-cies only, hence known as the “specific” or species phase. A large number of flagellar antigens, more than 80, have been found in this phase. These are designated as small letters of alphabets a–z except j and subsequently z1–z68. The presumptive identi-fication of serotype is based on the identification of the antigen in phase 1.Phase 2 antigens are widely shared, hence known as the “nonspecific” or “group” phase. Phase 2 antigens are far fewer and are designated by Arabic numerals from 1 to 12 (1, 2, and 3 . . . up to 12).

Variations in O antigen: Changes in the structural formulaeof the O antigen may be brought about by lysogenization with some converting phages, resulting in the alteration of bacterial serotypes. Thus, Salmonella Anatum (serotype 3,10:e,h:1,6) is con-verted by phage 15 into Salmonella Newington (serotype 3,15:e,h:1,6) by one phage and the latter into Salmonella Minneapolis(serotype 3,15,34:e,h:1,6) by phage 34. Serotypes Newington and Minneapolis are designated as anatum var. 15 and anatum var. 15 , 34 , respectively.