Parasites: There are 3000 species of parasitic plants, 20% entirely dependent on their hosts; 60% of plant parasites are root parasites, 40% parasites of stems.

There are 3000 species of parasitic plants, 20% entirely dependent on their hosts; 60% of plant parasites are root parasites, 40% parasites of stems. Most are herbaceous ephemerals or perennials of grasslands and disturbed areas, but a few are woody and sandalwoods are trees. Many have numerous small seeds. Stem parasites have fleshy animal-dispersed fruits.

In root parasites, root exudates from a potential host stimulate germination and a radicle to grow to the host root. Once attached, most parasites establish a haustorium connecting the vascular systems to absorb some of the host’s nutrients. Stem parasites attach in a similar way to above-ground parts.

Parasites can reduce crop yields by 30%, the most important pests being Striga species on cereal crops in Africa and Asia, Alectra species on groundnuts and others and Orobanche species mainly on beans. These are all members of the Scrophulariaceae family group. One unrelated pest isCuscuta species, stem parasites of low host specificity.

Saprophytes obtain nutrients from decaying plant parts. Plants can only do this using mycorrhizal fungi and all mycorrhizal plants are partially saprophytic. A few specialized members of the two ectendomycorrhizal family groups, the heathers and orchids, have no green parts and depend entirely on their fungi. The gametophytes of some spore-bearing plants are saprophytic.

The great majority of plants use only sunlight and inorganic molecules for all their energy and nutritional needs, but there are some exceptions. There are around 3000 species of plants that are at least partially parasitic on other plants, i.e. a little over 1% of all flowering plants. Only about 20% of these are entirely dependent on their hosts, the remainder having some green parts so potentially making some of their own sugars (known ashemiparasites). A few of these can live without a host plant, although they rarely do. At least eight plant families have parasitic members, some of which also have non-parasitic species, so the habit has probably evolved several times within the flowering plants. Among land plants only angiosperms have become parasitic (one unusual conifer of New Caledonia may be partially parasitic on other conifers). About 60% of plant parasites are attached to the roots of their hosts, the remainder to stems. A few are specific to a single host species but most can parasitize a range of species, often within one family. They are distributed throughout the world, favoring disturbed places, though root parasites are particularly common in grasslands of the Mediterranean and subtropical climates.

There is a range of life cycles among parasites. Most are herbaceous ranging from ephemeral plants to long-lived perennials, but there are several woody plants such as the mistletoes  among stem parasites, and, among root parasites, sandalwoods, some of which are medium-sized trees. Their reproduction is similar to non-parasitic flowering plants, and the largest known single flower, up to 1 m in diameter, is a parasite of the south-east Asian forests,Rafflesia. Most root parasites have small seeds and some, such as the broomrapes, have dust-like seeds produced in great quantity, dispersed by the wind. Almost all stem parasites have fleshy fruits dispersed mainly by birds. Those parasites that are specialized to one or a few host species tend to be longer lived and produce more, smaller seeds than the generalists, many of which are shortlived.

In root parasites, the seeds germinate in response to chemical signaling from the roots of a host plant. A sesquiterpene chemical, strigol, has been identified as an important stimulant but this substance comes from non-host plants too and may be secreted by microorganisms associated with the root rather than the root itself. Other substances, as yet unidentified, must be important. The best studied parasite is Striga hermonthica, a pest of several species of cereal. It seems that the parasite has several strains, each strain occurring on one host species and responding only to exudates from that host.

Once a seed has germinated, a short radicle may grow and this must come into contact with root hairs from the host or it will die. It can then stick onto the root hairs and penetrate the root by mechanical pressure and through the action of hydrolytic enzymes. It may meet some resistance at the endodermis but once it gets through that it reaches the vascular tissue and penetrates the xylem vessels through pits or by dissolving the cell walls, making direct vascular connection with its host. Once it has penetrated, it obtains all its nutrients and energy from the host. The attachment structure is known as the haustorium (Fig. 1). In most parasite species, immediately above the site of connection the haustorium becomes swollen and full of vascular tissue and parenchyma cells. In hemiparasites, once the shoot grows out of the ground it becomes green and  can photosynthesize; it reproduces by seed.

Some parasites do not produce well defined haustoria and members of the Rafflesiaceae grow numerous thin strands resembling fungal hyphae through its host cortex and cambial cells. Stem parasites develop in a similar way to root parasites, forming haustoria making a connection between the vascular systems of the stems.

Parasites take up water and nutrients from the host and this weakens the host plants. Sometimes a parasite causes visible damage resulting in wilting, reduction in plant size, lower yield and lower quality of the crop and can cause up to 30% crop loss. They are important agricultural pests in Africa, parts of Asia and the Mediterranean, and their spread to other areas via contaminated seed is causing concern for food production. 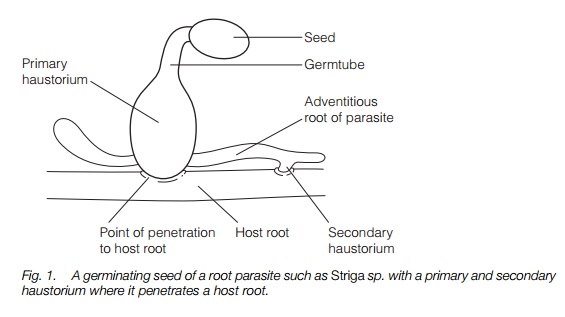 The most serious pests are species of witchweed, Striga, particularly S. hermonthica, which seriously reduce yields of maize, rice, sorghum, millet andsugar cane in the African Sahel and Asia. They are root hemiparasites in the Scrophulariaceae, a family containing many hemiparasites. The related Alectra species, mainly found in West Africa, parasitize groundnut, cowpea andsunflowers. The broomrapes, Orobanche spp., in the Orobanchaceae, closely related to Scrophulariaceae, can be serious pests of beans, lentils, tobacco, tomatoes and sunflowers, Orobanche crenatacausing serious crop losses in the Mediterranean. A quite different group, the dodders, Cuscuta species, related to the bindweeds, Convolvulaceae, are stem parasites of dicots with low host specificity and can attack many different crops.

In natural plant communities, parasitic plants may reduce diversity in some places but their ecological importance is minor.

A saprophyte is an organism that decays dead vegetation. No plant of any kind is capable of that, but many fungi are saprophytic, including ecto- and ectendomycorrhizal fungi . Flowering plants that are dependent on these mycorrhizal fungi for all their nutrients and energy are referred to as ‘saprophytes’, although any plant that has such a mycorrhizal association must be regarded as, in part, saprophytic. All orchids and some other plants are saprophytic when they first germinate, being dependent on their mycorrhizae. Most later grow green stems and leaves and are partially autotrophic, but many terrestrial orchids live on woodland floors where photosynthesis is severely limited and many of these must remain mainly saprophytic.

Fully saprophytic plants are found among two of the highly specialized ectendomycorrhizal groups, the orchids, such as the coralroot and birdsnest orchids, and the birdsnests (Fig. 2) or Indian pipes among the heather family group (usually in a separate family Monotropaceae). They are entirely dependent, in effect parasitic, on their mycorrhizae and have small restricted root systems, some rounded like a bird’s nest or branching like a coral giving the plants their common names, and having scale-like leaves and no green parts at all. Most live in deep shade on woodland floors. The plant’s mycorrhizae may be connected with trees, and nutrients have been traced passing from tree to saprophytic plant via the mycorrhizae. In their form and color the fully saprophytic plants closely resemble root parasites.

The gametophytes of some clubmosses, horsetails and ferns (Topics Q3 and Q4) are entirely subterranean and live saprophytically with their associated mycorrhizae, although the sporophytes are autotrophic. 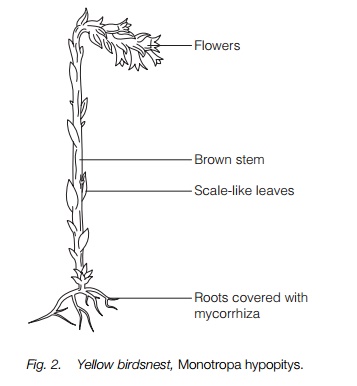