A few plants supplement their nutrients by trapping and digesting animals. All can photosynthesize as well and have roots capable of absorbing water and nutrients but, typically, they live in acid nutrientpoor environments, often bogs.

A few plants supplement their nutrients by trapping and digesting animals. All can photosynthesize as well and have roots capable of absorbing water and nutrients but, typically, they live in acid nutrientpoor environments, often bogs.

There are three unrelated groups of pitcher plants, all of which have furled leaves sealed along a keel in the shape of a pitcher. Sugar-secreting glands occur on a flap and attract insects and other animals and these then cannot get out because of downward-pointing hairs and waxy surfaces. They are digested in collected rain water and a mix of digestive enzymes and absorbed by cells at the base of the pitcher.

Sundews and butterworts have sticky secretions on their leaves that catch animals. Some other plants have sticky secretions that trap insects, and carnivorous plants probably evolved from this. The rare Venus fly-trap has an elaborate hinge mechanism triggered by an electrical impulse that responds rapidly; the waterwheel plant is similar but smaller and under water. The aquatic bladderworts have an equally elaborate trap mechanism involving a partial vacuum that sucks small invertebrates into the bladder.

The true carnivorous plants have sophisticated traps, sometimes involving movements by the plant, into which insects and other small invertebrates and even occasionally small vertebrates are enticed. There are about 400 species of carnivorous plants in at least five families and carnivory appears to have arisen independently several times.

There are three separate families of pitcher-plants, the Sarraceniaceae from north and south America, the Nepenthaceae of Asia and theCephalotaceae of Australia. All have a funnel-shaped pitcher (Fig. 1) deriving from part or all of a curled leaf fused at the edges with a keel. These families are not closely related and the pitchers look alike through similar life style, and are a remarkable example of convergent evolution. Details of the structure differ in the three families but all have a flap of leaf above the pitcher, mainly used as an attractant, sometimes with sugar-secreting glands, leading insects to the lip. On the insides of the pitchers are downward pointing hairs and waxy surfaces making escape difficult or impossible. Pitchers catch rain water and the simplest drown their prey and allow bacteria to digest them. The more elaborate pitchers secrete enzymes such as proteases, lipase, esterase and other enzymes and acid into the pitcher. Small animals can be digested quickly, often within 2 days, leaving just the chitinous husk of an insect. Bacteria living in the pitchers may digest this too. Cells in some areas at the base of the pitcher have no cuticle and nutrients can be absorbed. 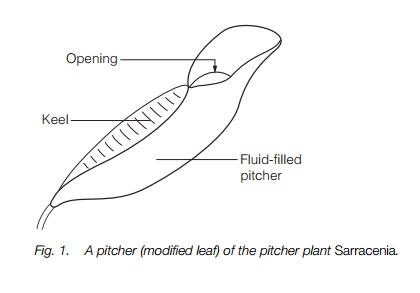 Despite the digestive enzymes in pitchers, a small community of fly larvae, crustacea and spiders live inside pitchers in some parts of their distribution, apparently resistant to the enzymes.

Two unrelated plant families have leaves that act like fly-paper, catching insects in a sticky secretion. The sundews and their relatives (Droseraceae) have specialized glandular hairs on their leaves (and on stems in some) and the

butterworts (Pinguicula spp.) have leaves that are sticky all over the surface. In some, the leaves roll around the animal once it is caught. They havedigestiveglands in the leaves secreting a similar range of enzymes to the pitcher plants and, with the help of bacteria secreting chitinase, insects are digested quickly. Many plants that are not regarded as carnivorous produce sticky secretions, normally on stems, buds or seeds, and insects and other small animals can become trapped and killed in these. If these animals decay while remaining attached to the plant some of these species may be able to absorb the nutrients from them and this is likely to be how carnivorous plants first evolved.

The most elaborate of carnivorous plants are the famous Venus fly-trap, Dionaea muscipula, a rather rare plant of bogs in eastern USA and the aquatic waterwheel plant, Aldrovanda vesiculosa, both related to the sundews, and bladderworts, Utricularia, with about 250 species related to the butterworts. The Venus fly-trap has a modified leaf in which two lobes are joined by a hinge region (Fig. 2), in which motor cells are capable of rapid turgor changes. When an insect lands on the leaf surface and touches the two to five sensitive hairs, an electrical stimulus is sent through the leaf triggering a rapid release of pressure in the motor cells if the hairs are stimulated several times. How this trigger works is still little known. This shuts the two halves of the leaf sufficiently to trap the insect and the leaf completes its shutting more slowly through normal growth processes, crushing any animal that is caught. The waterwheel plant has a similar but much smaller aquatic trap no more than 2 mm in diameter in which it catches tiny aquatic animals. 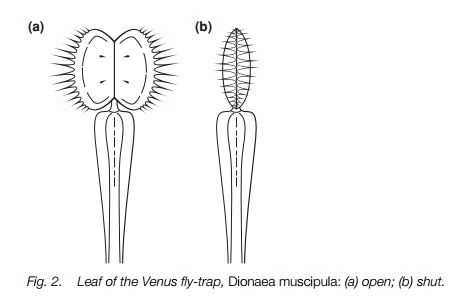 The bladderworts have elaborate tiny bladders under water, 0.25–5 mm in diameter. These are spherical to conical or cylindrical and water is extracted from them until the walls are pulled inwards to develop considerable suction pressure. There is a trap door that is kept closed but under tension. This is released by an animal that triggers surrounding hairs and the animal is sucked rapidly in by the pressure, after which the door immediately closes again, all this taking about one hundredth of a second. The suction pressure is restored after an hour or two.