Types of mycorrhiza: Mycorrhizae occur in most land plants. There are three categories: endomycorrhizae, the commonest form, which penetrate the cortical cell walls in roots; ectomycorrhizae, characteristic of temperate trees, which form a sheath around the absorbing roots; and ectendomycorrhizae, consisting of several specialized types with both structures. A few plant groups have no mycorrhizae. The fungi mostly fruit underground except for some ectomycorrhizae.

Mycorrhizae occur in most land plants. There are three categories: endomycorrhizae, the commonest form, which penetrate the cortical cell walls in roots; ectomycorrhizae, characteristic of temperate trees, which form a sheath around the absorbing roots; and ectendomycorrhizae, consisting of several specialized types with both structures. A few plant groups have no mycorrhizae. The fungi mostly fruit underground except for some ectomycorrhizae.

Nature of the symbiosis

Normally the interaction has mutual benefit but it varies from the fungus being pathogenic to the plant being parasitic on the fungus. Usually, sugars from the plant are absorbed by the fungus and the fungus absorbs soil nutrients and transfers them to the plant. Numerous fungal species are involved and most are not species-specific. Mycorrhizae have extensive hyphal networks and ectomycorrhizae have hyphae that fuse with neighboring fungi.

Effects of the fungi on plants

Endomycorrhizae are highly efficient at absorbing nutrients from the soil, particularly nitrogen and phosphorus, and ectomycorrhizae are able to digest organic matter. Sugars from the plant are normally absorbed and fixed by the fungi, but in some interactions the plant absorbs sugars from the fungus and the interaction can differ in different species and change in the lifetime of one plant. They can inhibit other fungi, including decay fungi and plant pathogens.

These are not well understood but effects can be profound. Mycorrhizae may be unimportant in early succession but endomycorrhizae and, in some places, ectomycorrhizae, invade and there may be a succession of fungi. In a mature community one species of fungus may enhance the growth of one plant but inhibit another. A diverse plant community relies on a diverse fungus community. Ectomycorrhizal networks may prevent non-mycorrhizal species from invading. Successful conifer forestry needs mycorrhizae in the soil.

Mycorrhizae are the associations between the roots of plants and fungi. The great majority of plants have a mycorrhizal association and it is thought to have been vital in the initial colonization of land. Mycorrhizal associations are known in the rhizoids of bryophytes and the gametophytes of spore-bearing vascular plants as well as in the roots of all groups of vascular plants, except perhaps the horsetails. Their effects are profound on many aspects of plant life. Mycorrhizae fall into three main categories with rather different properties, deriving from a diverse group of fungi. The basic structure of a fungus is the hypha. These are strands of cells a single cell thick, although sometimes without dividing cell walls, that grow through a medium. They secrete enzymes and absorb nutrients.

The most common form of mycorrhiza is the endomycorrhiza, otherwise known as arbuscular or vesicular-arbuscular mycorrhiza. In these the fungal hyphae penetrate through the cell walls of the root cortex, forming a mass of twisted hyphae apparently within the cells, known as arbuscules (Fig. 1). The hyphae do not actually penetrate the cell membrane but this invaginates many times, much increasing its surface area, around the hyphae. In some species, hyphae form oil-filled vesicles, perhaps as food stores, in invaginations in other cells. The fungus does not penetrate beyond the cortex of a root. Endomycorrhizae are found in most herbaceous plants, most tropical trees and some temperate woody plants and are the main mycorrhizae in most habitats. Nearly all endomycorrhizae produce subterranean fruiting bodies.

The second type is the ectomycorrhiza, in which the fungi form a dense mat of hyphae known as the Hartig net around the outside of the short absorbing roots and may surround cortical cells but do not penetrate the cortical cell walls at all (Fig. 2). This type is found in a small proportion of all flowering plant species but is characteristic of many of the dominant trees of temperate and boreal environments as well as some tropical trees, particularly those growing on nutrient-poor acidic soils. The third type, ectendomycorrhiza, is really several highly specialized types that, in structure, have characteristics of both the other types forming a mat around the root and penetrating the cortical cell walls. They are characteristic of certain families, notably the orchids (Orchidaceae) and the heather family group (Ericaceae and related families).Some species of fungi can form both ectomycorrrhizae and endectomycorrhizae depending on the plant species infected. Most form fruiting bodies above the ground, including many familiar ‘toadstools’ of northern woods, but some are subterranean. 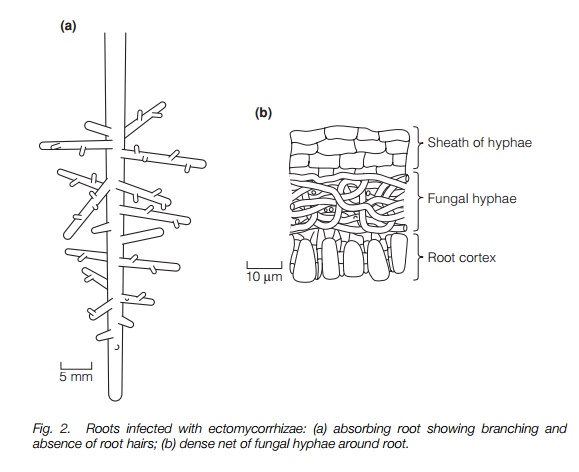 A few plant families and genera are rarely associated with mycorrhizae, including the cabbage family (Brassicaceae), the goosefoot family (Chenopodiaceae) and the temperate sedges (Carex spp.).

Nature of the symbiosis

The symbiotic relationship between plant and fungus varies from being one in which the fungus gains from the plant but is, in effect, a pathogen, through a range of mutualistic associations where both benefit to some extent, to one in which the plant gains at the expense of the fungus. Mycorrhizae resemble pathogenic fungi in many ways and it can be difficult to distinguish the two since sites of infection can be the same. When working to mutual benefit,

sugars generated by photosynthesis in the plant are transported to the roots and taken up by the fungi, and nutrients, most importantly nitrogen and phosphorus, are absorbed by the fungal hyphae in the soil and conducted to the plant. Many plants with endomycorrhizae can survive without them, particularly on nutrient-rich soils, but those with ecto- and ectendomycorrhizae are normally obligately associated at least at some stage in their life cycle.

Numerous species of fungi are involved and some are specific to particular species or genera of plants, whereas others infect many species; most plants can be infected by many species of fungi. The growth form of the fungi varies greatly, with some producing a mass of hyphae close to the roots, others spreading more widely and thinly. Endomycorrhizae grow out from a root to form an expanding fan and normally do not fuse with other neighboring fungi. Ectomycorrhizae start growing in a similar way but when they meet hyphae from other ectomycorrhizae these can fuse, oranastomose, and the mycorrhizae form a network of interconnecting hyphae in the soil.

Effects of the fungi on plants

The main effect of the fungi is absorbing nutrients from the soil. Roots infected with endomycorrhizae retain root hairs and are able to absorb nutrients, but ecto- and ectendomycorrhizal roots generally lose all their root hairs and rely solely on the fungus. Endomycorrhizal fungi have an extensive hyphal network in the soil making absorption more efficient than that by roots alone. Ecto- and ectendomycorrhizae have a similar hyphal network, but are also able to digest organic matter making organic nitrogen and phosphorus, which is normally unavailable for plants, to be absorbed. This is particularly important in the nutrient-poor acidic soils in which these mycorrhizae are typical since it allows the mycorrhizal plants to absorb almost all the nutrients as they become available. In many soils nitrogen is a limiting plant nutrient and the fungal hyphae absorb nitrogen over a much larger soil area or with greater efficiency over a small area than roots, leading to enhanced growth of the plant. In some soils, particularly those on basic substrates, phosphorus is in short supply and the effect is similar. By contrast, some mycorrhizal associations can reduce a plant’s growth where the soil is rich in nutrients.

Sugars from photosynthesis are conducted around the plant and the fungi absorb these as sources of energy. Once they are in the hyphae they are normally stored as complex sugars that cannot be reabsorbed by the host plant.

Plants infected with mycorrhizae frequently have higher rates of photosynthesis than uninfected plants and these fungi transport more nitrogen and phosphorus into the plant. The relationship can change through the lifetime of a plant. Some seedlings (e.g. orchids) may absorb carbohydrate as well as nutrients from the fungus but as the plant matures, growth may be reduced by the fungus, so the relationship becomes parasitic first one way then the other. The ‘saprophytic’plants  remain parasitic on their fungi throughout their lives. Different plant species respond differently to the interaction, with some fungi enhancing the growth of one species but inhibiting another. The interaction is further complicated (e.g. in legumes) by interaction with the nitrogen-fixing bacteria in root nodules.

Mycorrhizal fungi interact with other fungi in the soil, inhibiting free-living fungi involved in the decay of plant matter, so overall decay can be slower because of the mycorrhizae. They may protect the plant by preventing pathogenic fungi and bacteria from invading. The overall effect of these interactions is that the mycorrhizal plants will be at a competitive advantage over any others.

The effect of mycorrhizae in community ecology is not well understood and their importance has been seriously underestimated. In many habitats they are abundant and the fungi can be responsible for 25% of the respiration in the soil; over 30 m of hyphae have been recorded from 1 cm3. Difficulties in identification and isolating the fungi are serious impediments to study.

In a mature plant community mycorrhizae can have an enormous influence on plant diversity. From experiments in which artificial grassland communities were created with different numbers of mycorrhizal species, the community with the greatest diversity of fungus species had greater variability within the ecosystem, with productivity differing in different parts and it supported the most diverse plant communities. Many plant species only survive in a community because of the fungi. Any one fungus species can enhance the growth of one plant species but inhibit another whereas a different fungus can have the reverse effect in the same community.

In communities dominated by ecto- or ectendomycorrhizal fungi, i.e. coniferous forests, heathlands, many temperate woodlands and some tropical and subtropical woodlands on acid soils, all the dominant plants may be connected underground via the network of anastomosing mycorrhiza and the plants may compete for the nutrients within this network. Any plant that is not connected with the mycorrhiza is likely to be unable to obtain nutrients over much of the habitat. Early attempts to plant new forest species, e.g. in Australia and the Caribbean, especially conifers, failed because of the lack of mycorrhiza which had to be imported from their native habitats before the plantations were successful.