Unfortunately, there isn’t some mechanical process we can follow; if there were, we could write a program that would convert any serial program into a parallel program, but, as we noted in Chapter 1, in spite of a tremendous amount of work and some progress, this seems to be a problem that has no universal solution.

However, Ian Foster provides an outline of steps in his online book Designing and Building Parallel Programs [19]:

Partitioning. Divide the computation to be performed and the data operated on by the computation into small tasks. The focus here should be on identifying tasks that can be executed in parallel.

Communication. Determine what communication needs to be carried out among the tasks identified in the previous step.

Agglomeration or aggregation. Combine tasks and communications identified in the first step into larger tasks. For example, if task A must be executed before task B can be executed, it may make sense to aggregate them into a single composite task.

Mapping. Assign the composite tasks identified in the previous step to processes/ threads. This should be done so that communication is minimized, and each process/thread gets roughly the same amount of work.

This is sometimes called Foster’s methodology.

Let’s look at a small example. Suppose we have a program that generates large quan-tities of floating point data that it stores in an array. In order to get some feel for the distribution of the data, we can make a histogram of the data. Recall that to make a histogram, we simply divide the range of the data up into equal sized subinter-vals, or bins, determine the number of measurements in each bin, and plot a bar graph showing the relative sizes of the bins. As a very small example, suppose our data are

Then the data lie in the range 0–5, and if we choose to have five bins, the histogram might look something like Figure 2.20.

It’s pretty straightforward to write a serial program that generates a histogram. We need to decide what the bins are, determine the number of measurements in each bin, and print the bars of the histogram. Since we’re not focusing on I/O, we’ll limit ourselves to just the first two steps, so the input will be

the number of measurements, data count;

the minimum value for the bin containing the smallest values, min meas;

the maximum value for the bin containing the largest values, max meas;

the number of bins, bin count; 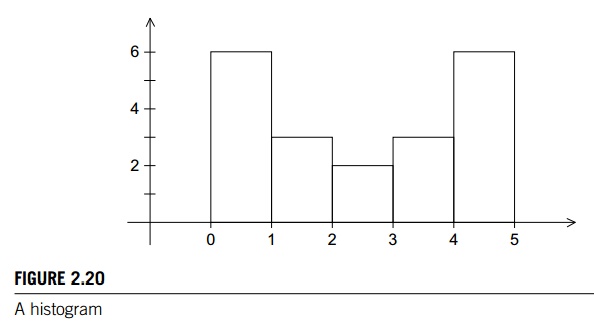 The output will be an array containing the number of elements of data that lie in each bin. To make things precise, we’ll make use of the following data structures:

Then bin maxes will be initialized by

Of course, this doesn’t make sense if b D 0, and in this case we’ll use the rule that bin 0 will be the measurements in the range

This means we always need to treat bin 0 as a special case, but this isn’t too onerous. Once we’ve initialized bin maxes and assigned 0 to all the elements of

bin counts, we can get the counts by using the following pseudo-code:

The Find bin function returns the bin that data[i] belongs to. This could be a simple linear search function: search through bin maxes until you find a bin b that satisfies

(Here we’re thinking of bin maxes[ 1] as min meas.) This will be fine if there aren’t very many bins, but if there are a lot of bins, binary search will be much better.

If we assume that data count is much larger than bin count, then even if we use binary search in the Find bin function, the vast majority of the work in this code will be in the loop that determines the values in bin counts. The focus of our paralleliza-tion should therefore be on this loop, and we’ll apply Foster’s methodology to it. The first thing to note is that the outcomes of the steps in Foster’s methodology are by no means uniquely determined, so you shouldn’t be surprised if at any stage you come up with something different.

For the first step we might identify two types of tasks: finding the bin to which an element of data belongs and incrementing the appropriate entry in bin counts.

For the second step, there must be a communication between the computation of the appropriate bin and incrementing an element of bin counts. If we represent our tasks with ovals and communications with arrows, we’ll get a diagram that looks something like that shown in Figure 2.21. Here, the task labelled with “data[i]” is determining which bin the value data[i] belongs to, and the task labelled with “bin counts[b]++” is incrementing bin counts[b].

For any fixed element of data, the tasks “find the bin b for element of data” and “increment bin counts[b]” can be aggregated, since the second can only happen once the first has been completed.

However, when we proceed to the final or mapping step, we see that if two pro-cesses or threads are assigned elements of data that belong to the same bin b, they’ll both result in execution of the statement bin counts[b]++. If bin counts[b] is shared (e.g., the array bin counts is stored in shared-memory), then this will result in a race condition. If bin counts has been partitioned among the processes/threads, then updates to its elements will require communication. An alternative is to store multiple “local” copies of bin counts and add the values in the local copies after all the calls to Find bin.

If the number of bins, bin count, isn’t absolutely gigantic, there shouldn’t be a problem with this. So let’s pursue this alternative, since it is suitable for use on both shared- and distributed-memory systems.

see that if we create an array loc bin cts for each process/thread, then we can map the tasks in the first two groups as follows:

Elements of data are assigned to the processes/threads so that each process/thread gets roughly the same number of elements.

Each process/thread is responsible for updating its loc bin cts array on the basis of its assigned elements. 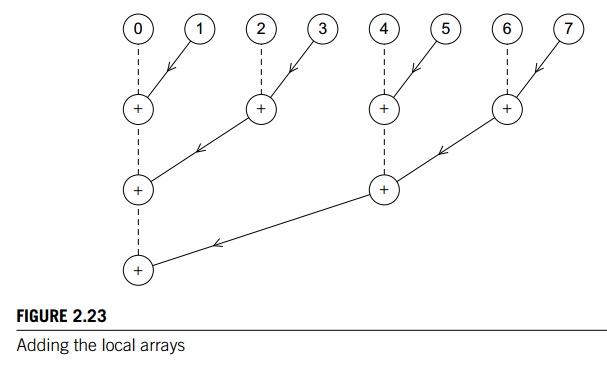