o     Hypophosphataemia is often present. Hyper­ phosphataemia (greater than 1.2 mmol/L), occurring 48 to 96 hours after the overdose, and in the presence of both renal and hepatic dysfunction, is a poor prognostic indicator.

o     Decreased serum interleukin-6 (IL-6) or C-reactive protein (a surrogate for IL-6) levels following acute paracetamol overdose have been found to be statisti-cally associated with hepatic injury and may serve as prognostic factors for predicting impending hepatic injury.

·              Serum paracetamol level: The lowest acute dose ofparacetamol capable of toxicity is generally regarded as 7.5 grams in an adult and 150 mg/kg in a child, though it is more likely that the actual figures may be 15 grams and 250 mg/kg respectively.

·      Interpretation of serum paracetamol (acetami-nophen) levels is usually done on the basis of the Rumack-Matthew nomogram (Fig 29.2). The orig-inal nomogram was based on the fact that patients in whom the AST or ALT values would rise (more than 1000 IU/L) could be separated from those in whom this would not happen on the basis of initial paracetamol level (PL). The nomogram line was constructed on a plot of PL versus time since inges-tion. The line chosen started at a PL of 200 mcg/ml, 4 hours post-ingestion; declined with a 4-hour half-life through 50 mcg/ml, 12 hours post-ingestion; and ended at 6.25 mcg/ml, 24 hours post-ingestion. The line is based solely on ALT elevation rather than hepatic failure and is very sensitive though not very specific. 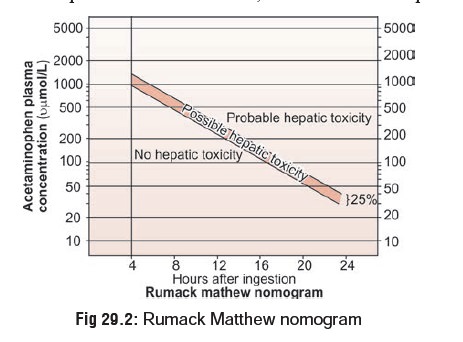 –– While the original line is still widely in use, the line used in USA has been lowered by 25% in order to enhance sensitivity. By using this modified nomo-gram it is said that nomogram failures in the USA are virtually non-existent.

––  The purpose of the Rumack-Matthew nomogram is to predict the risk of hepatic injury at the outset and begin antidotal therapy well in time. Levels obtained before 4 hours or after 24 hours cannot be interpreted, nor can levels obtained after chronic overdose. Though the risk cannot be predicted earlier than 4 hours post-ingestion, this does not matter at all since there seems to be no added effi-cacy in antidotal therapy when begun earlier than 4 hours after the overdose.

–– In those cases where the time of ingestion is unknown and cannot be determined, it is advis-able to determine both PL and AST. If the AST is elevated regardless of PL, begin antidotal therapy. If the PL is less than 10 mcg/ml and AST level is normal, the antidote (N-acetylcysteine) can be withheld.

––  If it is not possible for any reason to estimate the paracetamol level at all, then the risk of hepatic injury should be predicted on the basis of the history. Do not delay antidotal therapy for lack of a paracetamol level.

Administer loading dose, then discontinue if level comes back below the nomo-gram treatment line.

–– Conflicting reports are found in the literature regarding whether or not a lower treatment line on the Rumack-Matthew nomogram should be used for treating acute paracetamol overdoses in chronic alcoholics. On the one hand, a review of the literature has shown in animal studies that a lower dose of paracetamol is required to produce hepatotoxicity following chronic alcohol use due to induction of CYP enzymes and glutathione depletion. It is suggested that the animal results may apply to human cases, and some authors suggest a conservative guess of halving the dose/ concentration for treatment. On the other hand, due to species differences in CYP expression, activity and induction, results cannot always be extrapolated from animals to human cases. Also, a literature review does not conclusively substantiate that exposure to chronic excessive amounts of alcohol will predispose paracetamol overdose patients to hepatotoxicity.

–– After 24 hours postingestion, the presence of paracetamol in the plasma may be documented, but interpretation of these levels is difficult. Because of increasing evidence of the beneficial effect of N-acetylcysteine instituted more than 24 hours after overdose, its use is recommended in patients presenting 24 hours or more post-ingestion who have measurable paracetamol levels or biochemical evidence of hepatic injury.

·      Concomitantly ingested drugs which change the rate of gastric emptying (codeine, other opiates, antimuscarinic drugs, antihistamines), may delay absorption of paracet-amol. Additional levels may be needed to determine the peak and the need for antidote.

·      Assessment of prognosis—Poor prognosis is characteristic of

o     Abnormal PT which continues to rise on the 4th day. In late presenters following paracetamol overdose, the best prognostic marker in established hepatotox-icity is the prothrombin time. Extended courses of

N-acetylcysteine may be given until the prothrombin time improves.

Children who have an unobtainable history or in whom a large amount of paracetamol is suspected to have been ingested (>200 mg/kg) should be referred to a health care facility for a 4-hour paracetamol serum level determination, and consideration for administration of activated charcoal. 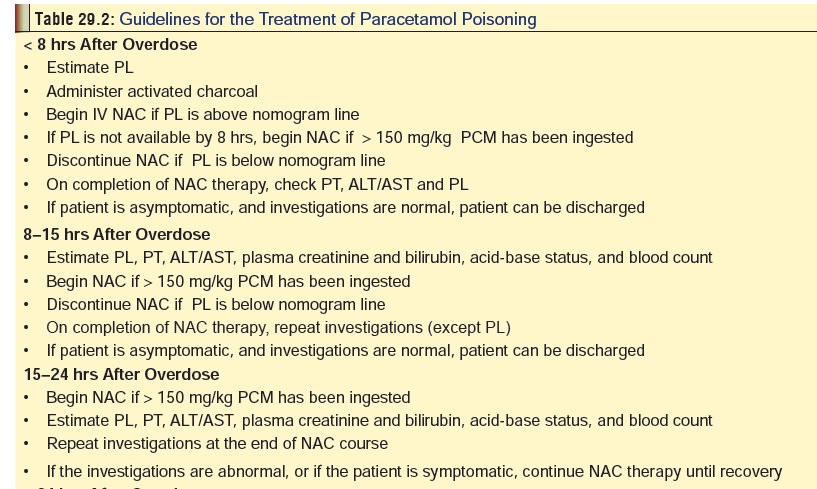 ·            Stomach wash: useful only in cases of very early presen-tation (<1 hour), or in concomitant ingestion of other drugs which delay GI absorption.

·            Activated charcoal can adsorb paracetamol, but it canalso adsorb the antidote (N-acetylcysteine) and hence must be administered earlier to 4 hours post-ingestion. It is most effective if given within one hour of ingestion of a liquid formulation or a tablet formulation.

o     Fresh-frozen plasma if there is overt bleeding.

o     Do not give sedatives, benzodiazepines, or NSAIDs.

·              Methionine—This is an oral antidote that is popular in the UK and some other countries, but is presently not available in India. It is a glutathione precursor and protects against paracetamol-induced hepatic and renal damage, provided it is administered within 8 to 10 hours of ingestion. Dose: 2.5 grams, 4 doses, at 4-hour intervals.

·              L-cysteine, a naturally occuring amino acid. NAC is the antidote of choice for paracetamol poisoning in the USA, and is gaining in popularity elsewhere including India. It gives maximum protection against hepatotoxicity when administered within 10 hours of paracetamol overdose, but can be given with (lesser) benefit upto 36 hours.

--  NAC is indicated in paracetamol overdose if PL estimated between 4 and 12 hours post-ingestion lies above the nomogram line (Fig 29.2).

-- Oral: 5% solution given as loading dose of 140 mg/kg. This is followed by 17 more doses at 70 mg/kg, 4th hourly, total making upto 1330 mg/kg over 72 hours. The calcu-lated dose can be administered mixed with water, or flavoured or carbonated drink. Fora child: Initial - 140 mg/kg for one dose,followed by 70 mg/kg/dose every 4 hours for 68 hours, beginning within 10 hours of the ingestion. A shorter duration of oral NAC has been recommended by some investigators for acute paracetamol overdoses presenting within 24 hours of ingestion: loading dose of 140 mg/kg followed by 70 mg/kg every 4 hours until the serum paracetamol level is no longer detectable and aminotransferase levels are normal, instead of the standard 72-hour treatment protocol. These investigators found this method safe and effective in patients not demonstrating hepatotoxicity within 36 hours of an acute overdose.

-- 48 hour regimen → useful in delayed admis-sions and massive ingestion. A loading dose of 140 mg IV is given over 1 hour, followed 4 hours later by the first of 12 maintenance doses of 70 mg/kg, each administered over 1 hour. The total dose of NAC works out to 980 mg/kg in just over 48 hours.

-- Oral—drinking NAC through a straw mini-mises its unpleasant odour. The main problem with oral NAC is induction of vomiting. Metoclopramide or ondansetron may have to be administered.

-- Intravenous—anaphylactoid reaction. If it occurs, it should be managed in the usual way with antihistamines, epinephrine, etc.

--  Isolated effects include pruritus, angi-oedema, nausea and vomiting, bronchospasm, tachycardia, hypotension, and hypertension. Facial or chest flushing is common, beginning 15 to 75 minutes after initiation of infusion, and is associated with peak NAC plasma concentrations of 100 to 600 mcg/L.

--A decrease in the prothrombin index (which corresponds to an increase in prothrombin time or INR) has been reported following administration of IV NAC for treatment of patients with paracetamol poisoning who did not exhibit signs of hepatocellular injury. The time of the decrease appeared to be associated with the start of the NAC infusion instead of with the ingestion of paracetamol. Because prothrombin time is measured as a prog-nostic indicator in patients with paracetamol poisoning, the concern is that the decrease in prothrombin index may be misinterpreted as a sign of liver failure. It is suggested that patient management decisions should not be based solely on the measurement of this value.

–– Schiodt et al (1999) developed a model, based on a prospective and validated study, to predict hepatic encephalopathy (HE) in paracetamol overdose, and to identify high-risk patients for early transfer to a liver intensive care unit/trans-plantation facility. The most accurate model for HE included: log10 (hours from overdose to antidote treatment), log10 (plasma coagulation factors on admission), and platelet count × hours from overdose (chi-square = 41.2, P<0.00001). HE was not seen in patients treated within 18 hours after overdose. A good predictor of later hepatic encephalopathy also includes a total Gc-globulin level less than 120 mg/L on day 2 following paracetamol overdose. This value was based on a prospective longitudinal study including 84 patients with acute paracetamol overdose.

––  The O’Grady criteria is a multivariate prog-nostic scoring system for predicting the need for listing a patient for liver transplantation.

The criteria include: arterial blood pH < 7.3 or H+ >50 mmol/L; or, PTR >100 seconds and serum creatinine >300 mcmol/L in patients with Grade III or IV encephalopathy. A modifiedO’Grady criteria states that if serum lactate is>3 at 4 hours, or >3.5 at 12 hours (after initial fluid resuscitation), the positive predictive value

of the O’Grady criteria is increased. A high APACHE (Acute Physiologic and Chronic Health Evaluation) II or III score may also predict the need for liver transplantation.

––  The use of arterial lactate concentration may allow for earlier identification of patients at high-risk of fatal paracetamol induced liver failure and likely to benefit from listing early for liver transplantation. Some investigators have found that an early arterial lactate 4 hours after transfer (median of 43 hours after ingestion) above 3.5 mmol/L correlated with an increased risk of fatal outcome. An arterial lactate concentration 12 hours after transfer and after adequate fluid resuscitation (guided by invasive haemodynamic monitoring) above 3.0 mmol/L also correlated with an increased risk of fatality. All patients had ICP monitoring as appropriate, noradrenaline was used as the primary vasopressor, NAC was infused at 150 mg/kg for 24 hours, and continuous venovenous haemofiltration with lactate-free fluid was used for renal replacement.

--or concurrently serum creatinine >300 mcmol/L, INR >6.5 and there is encepha-lopathy of grade 3 or greater.

·              Albumin dialysis: A molecular adsorbent recirculatingsystem (MARS), which is a modified dialysis method using an albumin-containing dialysate that is recirculated and perfused online through charcoal and anion-exchange columns, has been used following a massive paracetamol overdose with hepatic encephalopathy (grade II), severe acidosis, INR of 7, and hepatorenal syndrome. Albumin dialysis allowed time for hepatic regeneration during conventional supportive care in this case. A course of 5 consecutive 8-hour treatments was performed.

·              Extracorporeal sorbent-based devices: Paracetamol-induced hepatitis or hepatic failure have been treated at 16 to 68 hours after an overdose for 4 to 6 hours with the Liver Dialysis System (a single-access haemodiab-sorption system for treatment of serious drug overdose, and for treatment of hepatic encephalopathy). During this treatment, paracetamol levels dropped an average of 73%. If paracetamol levels were still measurable in plasma, treatment was repeated 24 or 48 hours later. In this group, liver enzymes normalised 24 hours after the last treatment and no patient required a liver transplant. No adverse effects due to this treatment were noted.