The output feedback (OFB) mode is similar in structure to that of CFB. As can be seen in Figure 6.6, it is the output of the encryption function that is fed back to the shift register in OFB, whereas in CFB, the ciphertext unit is fed back to the shift register. The other difference is that the OFB mode operates on full blocks of plaintext and ciphertext, not on an s-bit subset. Encryption can be expressed as

By rearranging terms, we can demonstrate that decryption works. 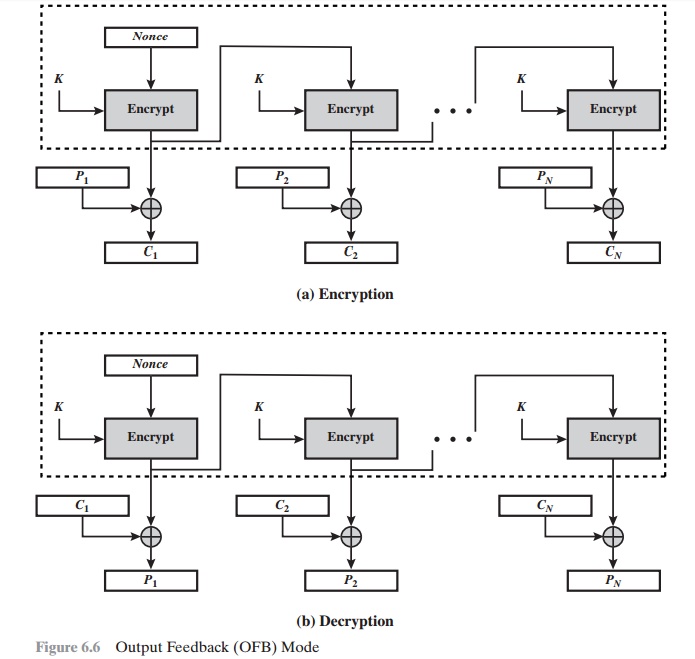 As with CBC and CFB, the OFB mode requires an initialization vector. In the case of OFB, the IV must be a nonce; that is, the IV must be unique to each execu- tion of the encryption operation. The reason for this is that the sequence of encryp- tion output blocks, Oi, depends only on the key and the IV and does not depend on the plaintext. Therefore, for a given key and IV, the stream of output bits used to XOR with the stream of plaintext bits is fixed. If two different messages had an identical block of plaintext in the identical position, then an attacker would be able to determine that portion of the Oi stream.

One advantage of the OFB method is that bit errors in transmission do not propagate. For example, if a bit error occurs in C1, only the recovered value of P1 is affected; subsequent plaintext units are not corrupted. With CFB, C1 also serves as input to the shift register and therefore causes additional corruption downstream. The disadvantage of OFB is that it is more vulnerable to a message stream modification attack than is CFB. Consider that complementing a bit in the cipher- text complements the corresponding bit in the recovered plaintext. Thus, controlled changes to the recovered plaintext can be made. This may make it possible for an opponent, by making the necessary changes to the checksum portion of the message as well as to the data portion, to alter the ciphertext in such a way that it is not detected by an error-correcting code. For a further discussion, see [VOYD83].

OFB has the structure of a typical stream cipher, because the cipher generates a stream of bits as a function of an initial value and a key, and that stream of bits is XORed with the plaintext bits (see Figure 3.1). The generated stream that is XORed with the plaintext is itself independent of the plaintext; this is highlighted by dashed boxes in Figure 6.6. One distinction from the stream ciphers we discuss in Chapter 7 is that OFB encrypts plaintext a full block at a time, where typically a block is 64 or 128 bits. Many stream ciphers encrypt one byte at a time.