Although interest in the counter (CTR) mode has increased recently with applica- tions to ATM (asynchronous transfer mode) network security and IP sec (IP security), this mode was proposed early on (e.g., [DIFF79]).

Although interest in the counter (CTR) mode has increased recently with applica- tions to ATM (asynchronous transfer mode) network security and IP sec (IP security), this mode was proposed early on (e.g., [DIFF79]).

Figure 6.7 depicts the CTR mode. A counter equal to the plaintext block size is used. The only requirement stated in SP 800-38A is that the counter value must be 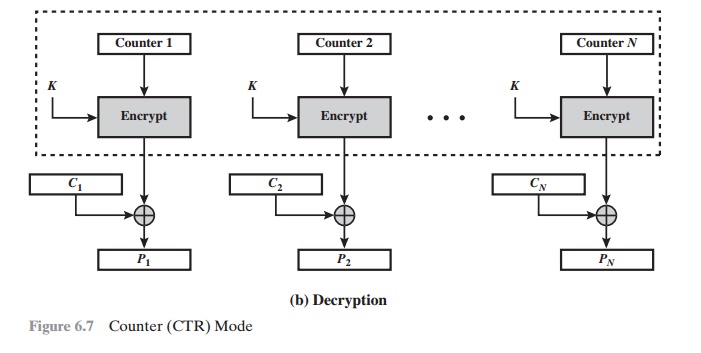 different for each plaintext block that is encrypted. Typically, the counter is initialized to some value and then incremented by 1 for each subsequent block (modulo 2b, where b is the block size). For encryption, the counter is encrypted and then XORed with the plaintext block to produce the ciphertext block; there is no chaining. For decryption, the same sequence of counter values is used, with each encrypted counter XORed with a ciphertext block to recover the corresponding plaintext block. Thus, the initial counter value must be made available for decryption. Given a sequence of counters T1, T2, ......., TN, we can define CTR mode as follows.

For the last plaintext block, which may be a partial block of u bits, the most sig- nificant u bits of the last output block are used for the XOR operation; the remaining b -u bits are discarded. Unlike the ECB, CBC, and CFB modes, we do not need to use padding because of the structure of the CTR mode.

•                           Software efficiency: Similarly, because of the opportunities for parallel execu- tion in CTR mode, processors that support parallel features, such as aggressive pipelining, multiple instruction dispatch per clock cycle, a large number of reg- isters, and SIMD instructions, can be effectively utilized.

•                           Random access: The ith block of plaintext or ciphertext can be processed in random-access fashion. With the chaining modes, block Ci cannot be com- puted until the i – 1 prior block are computed. There may be applications in which a ciphertext is stored and it is desired to decrypt just one block; for such applications, the random access feature is attractive.

Note that, with the exception of ECB, all of the NIST-approved block cipher modes of operation involve feedback. This is clearly seen in Figure 6.8. To highlight the feedback mechanism, it is useful to think of the encryption function as taking input from a input register whose length equals the encryption block length and with output stored in an output register. The input register is updated one block at a time by the feedback mechanism. After each update, the encryption algorithm is executed, producing a result in the output register. Meanwhile, a block of plaintext is accessed. Note that both OFB and CTR produce output that is independent of both the plaintext and the ciphertext. Thus, they are natural candidates for stream ciphers that encrypt plaintext by XOR one full block at a time. 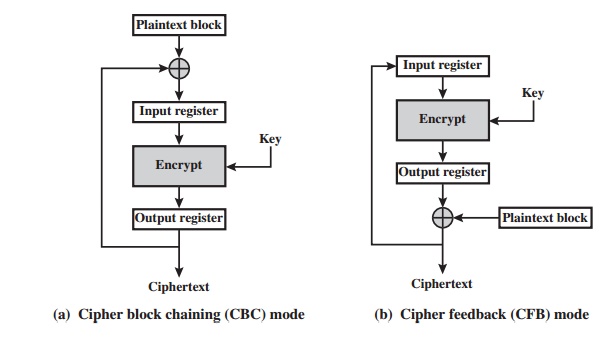 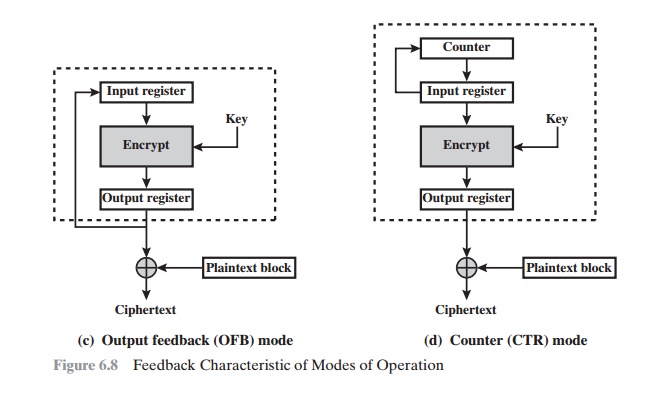