A group of organs form the organ system, and together they perform a particular function. The heart and the blood vessels together make the cardiovascular system.

A group of organs form the organ system, and together they perform a particular function. The heart and the blood vessels together make the cardiovascular system. Organs suchasnose, pharynx, trachea, lungs and diaphragm work to get her as the respiratory system. The mouth, oesophagus, stomach, duodenum, and the intestines together form the digestive system. Other examples of organ system include the endocrine system, integumentary system, muscular system, reproductive system, skeletal system, urinary system, immune system, etc. Let us see the respiratory system as an example for organ system elaborately.

We inhale air through the nostrils, which lead to the nasal cavity. The inner surface of this cavity is lined with cilia and mucous producing cells, which make it sticky and moist. The cilia and mucous trap dust and germs to prevent them from going deeper into the respiratory tract. The blood vessels in the nose help to warm the inhaled air.

After passing through the nasal cavity, the air enters the pharynx. Then it goes into the trachea or the windpipe which is an elastic tube extending down the length of the neck and partly into the chest cavity. Between the pharynx and the trachea lies a small air passage called the larynx commonly known as the voice box. The larynx has fold of tissue which vibrate with the passage of air to produce sound.

The trachea divides into two branches called bronchi (Singular: bronchus). Each bronchus leads to a lung, where it divides and redivides to finally form air passages called bronchioles.

The lungs are the organs present in the chest cavity that allow our body to exchange gases (oxygen and carbon dioxide). The lungs are two spongy elastic bags, on each side of the thoracic cavity. The thoracic cavity is bound dorsally by the vertebral column and ventrally by the sternum, laterally by the ribs and on the lower side by the dome shaped diaphragm. The left lung is slightly smaller than the right lung (allows room for the heart). Within the lungs, each bronchiole leads to a bunch of air sacs called alveoli (Singular: Alveolus).

On an average, an adult humanbeing at rest breathes in andout 15 – 18 times in a minute­. During heavy exercise, breathing rate can increase upto 25 times per minute.

Smoking damages lungs. Smoking is also linked to cancer. It must be avoided.

When you sneeze, you should cover your nose so that the foreign particles you expel are not inhaled by others.

Alveoli are tiny air sacs in the lungs that are located at the end of bronchial tubes, which is microscopic in nature. It is meant for the exchange of oxygen and carbon dioxide. 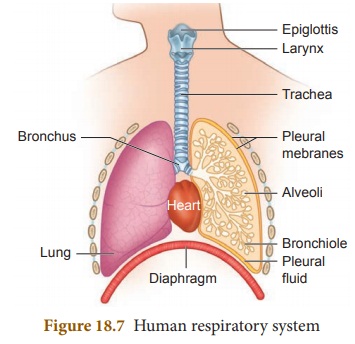 The process of taking air into the lungs is called inspiration or inhalation. During inspiration, the sternum is pushed up and outward and the diaphragm is pulled down. This increases the volume of the thoracic cavity and thus the pressure decreases. The air outside the body flows into the lungs. Here exchange of gases takes place between the air and the blood.

Exchange of gases in the Alveoli

The content of oxygen in the inhaled air in alveoli is more than the blood flowing through the capillaries. So, the oxygen moves into the blood by simple diffusion. Haemoglobin in the blood combines with oxygen to form oxyhaemoglobin. The blood carrying oxygen reaches the heart through blood vessels. The heart pumps it to all the tissues in the body. The tissues release carbon dioxide which is carried back to alveoli by the blood. Carbon dioxide diffuses from the blood to the air in the alveoli and is sent out of the body when the air is exhaled. 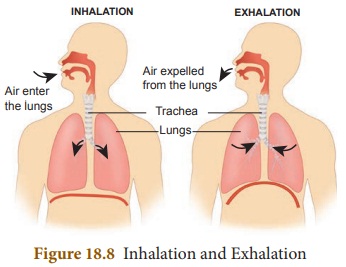 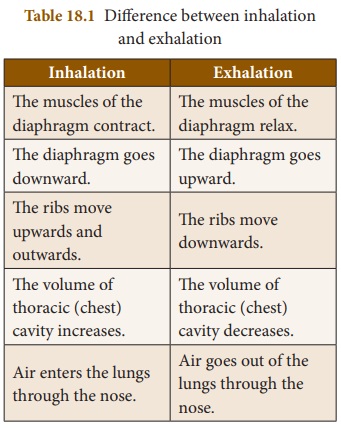 Stand erect and wave your hands in side wards. Take a deep breath and feel your rib movements. Then run some 100 metres and observe the rib movements. Discuss in the class room about what you observed.

Constructing a model of lungs.

Hold the large balloon in the middle and pull it slowly downwards as shown in the picture. Observe the change in the balloons inside the bottle. Now leave the balloon free. 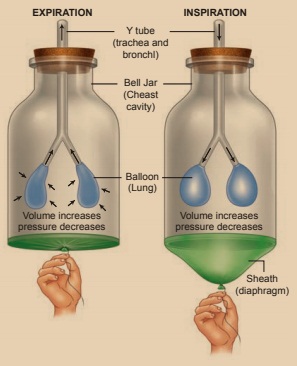