Lipoproteins have hydrophobic core regions containing cholesteryl esters and triglycerides surrounded by unesterified cholesterol, phos-pholipids, and apoproteins. Certain lipoproteins contain very high-molecular-weight B proteins that exist in two forms: B-48, formed in the intestine and found in chylomicrons and their remnants; and B-100, synthesized in liver and found in VLDL, VLDL remnants (IDL), LDL (formed from VLDL), and Lp(a) lipoproteins. HDLconsist of at least 20 discrete molecular species. All species contain apolipoprotein A-I (apo A-I). Fifty-three other proteins are known to be distributed variously among the HDL species.

Chylomicrons are formed in the intestine and carry triglycerides of dietary origin, unesterified cholesterol, and cholesterylesters. They transit the thoracic duct to the bloodstream.

Triglycerides are removed in extrahepatic tissues through a pathway shared with VLDL that involves hydrolysis by the lipoprotein lipase (LPL) system. Decrease in particle diameteroccurs as triglycerides are depleted. Surface lipids and small apo-proteins are transferred to HDL. The resultant chylomicron remnants are taken up by receptor-mediated endocytosis into hepatocytes.

VLDL are secreted by liver and export triglycerides to peripheral tissues (Figure 35–1). VLDL triglycerides are hydrolyzed by LPL, yielding free fatty acids for storage in adipose tissue and for oxida-tion in tissues such as cardiac and skeletal muscle. Depletion of triglycerides produces remnants (IDL), some of which undergo endocytosis directly by liver. The remainder is converted to LDL by further removal of triglycerides mediated by hepatic lipase. This process explains the “beta shift” phenomenon, the increase of LDL (beta-lipoprotein) in serum as hypertriglyceridemia subsides. Increased levels of LDL can also result from increased secretion of VLDL and from decreased LDL catabolism. 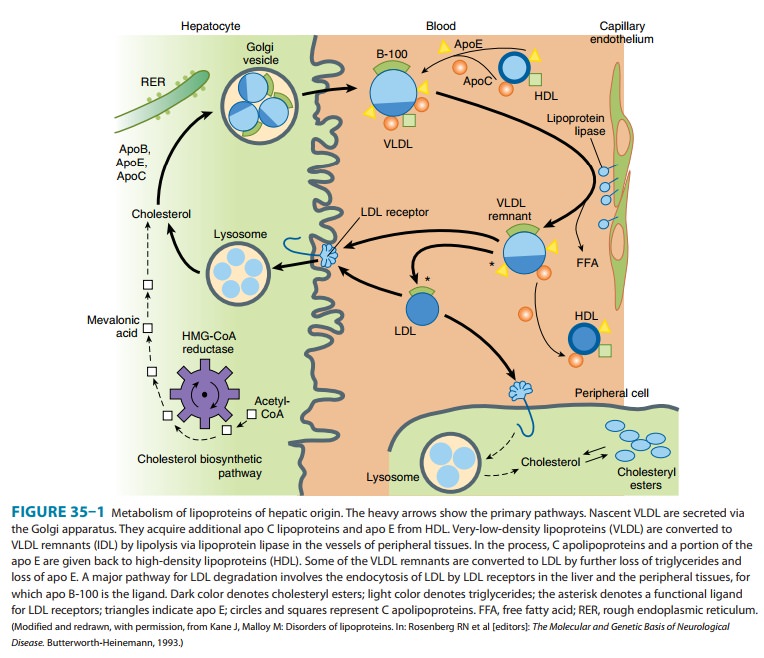 LDL is catabolized chiefly in hepatocytes and other cells by receptor-mediated endocytosis. Cholesteryl esters from LDL are hydrolyzed, yielding free cholesterol for the synthesis of cell membranes. Cells also obtain cholesterol by synthesis via a path-way involving the formation of mevalonic acid by HMG-CoA reductase. Production of this enzyme and of LDL receptors is transcriptionally regulated by the content of cholesterol in the cell. Normally, about 70% of LDL is removed from plasma by hepatocytes. Even more cholesterol is delivered to the liver via IDL and chylomicrons. Unlike other cells, hepatocytes can eliminate cholesterol by secretion in bile and by conversion to bile acids.

Lp(a) lipoprotein is formed from LDL and the (a) protein, linked by a disulfide bridge. The (a) protein is highly homologous with plasminogen but is not activated by tissue plasminogen activator. It occurs in a number of isoforms of different molecular weights. Levels of Lp(a) vary from nil to over 500 mg/dL and are determined chiefly by genetic factors. Lp(a) can be found in atherosclerotic plaques and may also contribute to coronary disease by inhibiting thrombolysis. Levels are elevated in certain inflammatory states. The risk of coronary disease is strongly related to the level of Lp(a). A common variant (I4399M) in the coding region is associated with elevated levels.

The apoproteins of HDL are secreted by the liver and intestine. Much of the lipid comes from the surface monolayers of chylomi-crons and VLDL during lipolysis. HDL also acquires cholesterol from peripheral tissues, protecting the cholesterol homeostasis of cells.

Free cholesterol is transported from the cell membrane by a transporter, ABCA1, acquired by a small particle termed prebeta-1 HDL, and then esterified by lecithin:cholesterol acyltransferase (LCAT), leading to the formation of larger HDL species. Cholesterol is also exported from macrophages by the ABCG1 transporter to large HDL particles. The cholesteryl esters are transferred to VLDL, IDL, LDL, and chylomicron remnants with the aid of cholesteryl ester transfer protein (CETP). Much of the cholesteryl ester thus transferred is ultimately delivered to the liver by endocytosis of the acceptor lipoproteins. HDL can also deliver cholesteryl esters directly to the liver via a docking receptor (scav-enger receptor, SR-BI) that does not cause endocytosis of the lipoproteins. HDL-C levels relate inversely to risk at the popula-tion level. Among individuals, the capacity to accept exported cholesterol can vary widely at identical levels of HDL-C. The abil-ity of peripheral tissues to export cholesterol via the transporter mechanism and the acceptor capacity of HDL are emerging as major determinants of coronary atherosclerosis.