Ezetimibe is the first member of a group of drugs that inhibitintestinal absorption of phytosterols and cholesterol. Its primary clinical effect is reduction of LDL levels.

Ezetimibe is the first member of a group of drugs that inhibitintestinal absorption of phytosterols and cholesterol. Its primary clinical effect is reduction of LDL levels. In one trial, patients receiving ezetimibe in combination with simvastatin had mar-ginal, but not statistically significant, increases in carotid intimal-medial thickness (IMT) compared with those receiving simvastatin alone. Interpretation of this observation is difficult for several reasons, including the fact that baseline IMT was unexpectedly small, probably due to prior lipid-lowering therapy. Because reducing LDL levels by virtually every modality has been associ-ated with reduced risk of coronary events, it is reasonable to assume that reduction of LDL by ezetimibe will have a similar impact. Further studies are pending.

Ezetimibe is readily absorbed and conjugated in the intestine to an active glucuronide, reaching peak blood levels in 12–14 hours. It undergoes enterohepatic circulation, and its half-life is 22 hours. Approximately 80% of the drug is excreted in feces. Plasma con-centrations are substantially increased when it is administered with fibrates and reduced when it is given with cholestyramine. Other resins may also decrease its absorption. There are no sig-nificant interactions with warfarin or digoxin 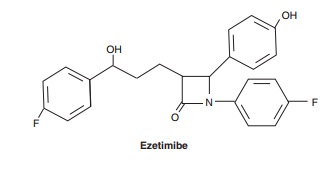 The effect of ezetimibe on cholesterol absorption is constant over the dosage range of 5–20 mg/d. Therefore, a single daily dose of 10 mg is used. Average reduction in LDL cholesterol with ezetimibe alone in patients with primary hypercholesterolemia is about 18%, with minimal increases in HDL cholesterol. It is also effective in patients with phytosterolemia. Ezetimibe is synergistic with reductase inhibitors, producing decrements as great as 25% in LDL choles-terol beyond that achieved with the reductase inhibitor alone.

Ezetimibe does not appear to be a substrate for cytochrome P450 enzymes. Experience to date reveals a low incidence of reversible impaired hepatic function with a small increase in incidence when given with a reductase inhibitor. Myositis has been reported rarely.