These compounds are structural analogs of HMG-CoA (3-hydroxy-3-methylglutaryl-coenzyme A, Figure 35–3). Lovastatin, atorvas-tatin, fluvastatin, pravastatin, simvastatin, rosuvastatin, and pitavastatin belong to this class.

These compounds are structural analogs of HMG-CoA (3-hydroxy-3-methylglutaryl-coenzyme A, Figure 35–3). Lovastatin, atorvas-tatin, fluvastatin, pravastatin, simvastatin, rosuvastatin, and pitavastatin belong to this class. They are most effective in reduc-ing LDL. Other effects include decreased oxidative stress and vascular inflammation with increased stability of atherosclerotic lesions. It has become standard practice to initiate reductase inhibitor therapy immediately after acute coronary syndromes, regardless of lipid levels. 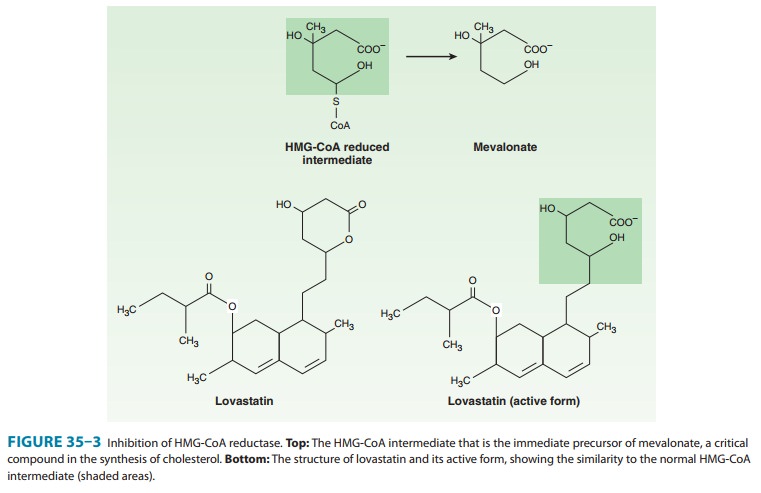 Lovastatin and simvastatin are inactive lactone prodrugs that are hydrolyzed in the gastrointestinal tract to the active β-hydroxyl derivatives, whereas pravastatin has an open, active lactone ring. Atorvastatin, fluvastatin, and rosuvastatin are fluorine-containing congeners that are active as given. Absorption of the ingested doses of the reductase inhibitors varies from 40% to 75% with the excep-tion of fluvastatin, which is almost completely absorbed. All have high first-pass extraction by the liver. Most of the absorbed dose is excreted in the bile; 5–20% is excreted in the urine. Plasma half-lives of these drugs range from 1 to 3 hours except for atorvastatin (14 hours), pitavastatin (12 hours), and rosuvastatin (19 hours).

HMG-CoA reductase mediates the first committed step in sterol biosynthesis. The active forms of the reductase inhibitors are struc-tural analogs of the HMG-CoA intermediate (Figure 35–3) that is formed by HMG-CoA reductase in the synthesis of mevalonate. These analogs cause partial inhibition of the enzyme and thus may impair the synthesis of isoprenoids such as ubiquinone and dolichol and the prenylation of proteins. It is not known whetherthis has biologic significance. However, the reductase inhibitors clearly induce an increase in high-affinity LDL receptors. This effect increases both the fractional catabolic rate of LDL and the liver’s extraction of LDL precursors (VLDL remnants) from the blood, thus reducing LDL (Figure 35–2). Because of marked first-pass hepatic extraction, the major effect is on the liver. Preferential activity in liver of some congeners appears to be attributable to tissue-specific differences in uptake. Modest decreases in plasma triglycerides and small increases in HDL also occur. 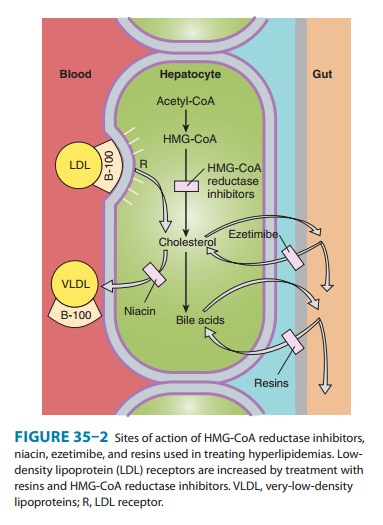 Clinical trials involving many of the statins have demonstrated significant reduction of new coronary events and atherothrom-botic stroke. Mechanisms other than reduction of lipoprotein levels appear to be involved. The availability of isoprenyl groups from the HMG-CoA pathway for prenylation of proteins is reduced by statins, resulting in reduced prenylation of Rho and Rab proteins. Prenylated Rho activates Rho kinase, which medi-ates a number of mechanisms in vascular biology. The observation that reduction in new coronary events occurs more rapidly than changes in morphology of arterial plaques suggests that these pleiotropic effects may be important. Likewise, decreased prenyla-tion of Rab reduces the accumulation of Aβ protein in neurons, possibly mitigating the manifestations of Alzheimer’s disease.

Reductase inhibitors are useful alone or with resins, niacin, or ezetimibe in reducing levels of LDL. Women with hyperlipidemia who are pregnant, lactating, or likely to become pregnant should not be given these agents. Use in children is restricted to selected patients with familial hypercholesterolemia or familial combined hyperlipidemia.

Because cholesterol synthesis occurs predominantly at night, reductase inhibitors—except atorvastatin and rosuvastatin— should be given in the evening if a single daily dose is used. Absorption generally (with the exception of pravastatin) is enhanced by food. Daily doses of lovastatin vary from 10 to 80 mg. Pravastatin is nearly as potent on a mass basis as lovastatin with a maximum recommended daily dose of 80 mg. Simvastatin is twice as potent and is given in doses of 5–80 mg daily. Because of increased risk of myopathy with the 80 mg/day dose, the FDA issued labelling for scaled dosing of simvastatin and Vytorin in June 2011. Fluvastatin appears to be about half as potent as lovas-tatin on a mass basis and is given in doses of 10–80 mg daily. Atorvastatin is given in doses of 10–80 mg/d, and rosuvastatin, the most efficacious agent for severe hypercholesterolemia, at 5–40 mg/d. The dose-response curves of pravastatin and especially of fluvastatin tend to level off in the upper part of the dosage range in patients with moderate to severe hypercholesterolemia. Those of other statins are somewhat more linear.

Elevations of serum aminotransferase activity (up to three times normal) occur in some patients. This is often intermittent and usually not associated with other evidence of hepatic toxicity. Therapy may be continued in such patients in the absence of symptoms if aminotransferase levels are monitored and stable. In some patients, who may have underlying liver disease or a history of alcohol abuse, levels may exceed three times normal. This find-ing portends more severe hepatic toxicity. These patients may present with malaise, anorexia, and precipitous decreases in LDL. Medication should be discontinued immediately in these patients and in asymptomatic patients whose aminotransferase activity is persistently elevated to more than three times the upper limit of normal. These agents should be used with caution and in reduced dosage in patients with hepatic parenchymal disease, Asians, and the elderly. Severe hepatic disease may preclude their use. In gen-eral, aminotransferase activity should be measured at baseline, at 1–2 months, and then every 6–12 months (if stable). Monitoring of liver enzymes should be more frequent if the patient is taking other drugs that have potential interactions with the statin. Fasting plasma glucose levels tend to increase 5–7 mg/dL with statin treatment.

Minor increases in creatine kinase (CK) activity in plasma are observed in some patients receiving reductase inhibitors, frequently associated with heavy physical activity. Rarely, patients may have marked elevations in CK activity, often accompanied by general-ized discomfort or weakness in skeletal muscles. If the drug is not discontinued, myoglobinuria can occur, leading to renal injury. Myopathy may occur with monotherapy, but there is an increased incidence in patients also receiving certain other drugs. Genetic variation in an anion transporter (OATP1B1) is associated with severe myopathy and rhabdomyolysis induced by statins.

The catabolism of lovastatin, simvastatin, and atorvastatin proceeds chiefly through CYP3A4, whereas that of fluvastatin and rosuvastatin, and to a lesser extent pitavastatin, is mediated by CYP2C9. Pravastatin is catabolized through other pathways, including sulfation. The 3A4-dependent reductase inhibitors tend to accumulate in plasma in the presence of drugs that inhibit or compete for the 3A4 cytochrome. These include the macrolide antibiotics, cyclosporine, ketoconazole and its congeners, some HIV protease inhibitors, tacrolimus, nefazodone, fibrates, parox-etine, venlafaxine, and others . Concomitant use of reductase inhibitors with amiodarone or verapamil also causes an increased risk of myopathy.

Conversely, drugs such as phenytoin, griseofulvin, barbiturates, rifampin, and thiazolidinediones increase expression of CYP3A4 and can reduce the plasma concentrations of the 3A4-dependent reductase inhibitors. Inhibitors of CYP2C9 such as ketoconazole and its congeners, metronidazole, sulfinpyrazone, amiodarone, and cimetidine may increase plasma levels of fluvastatin and rosuvasta-tin. Pravastatin and rosuvastatin appear to be the statins of choice for use with verapamil, the ketoconazole group of antifungal agents, macrolides, and cyclosporine. Doses should be kept low and the patient monitored frequently. Plasma levels of lovastatin, simvastatin, and atorvastatin may be elevated in patients ingesting more than 1 liter of grapefruit juice daily. All statins undergo gly-cosylation, thus creating an interaction with gemfibrozil.

Creatine kinase activity should be measured in patients receiving potentially interacting drug combinations. In all patients, CK should be measured at baseline. If muscle pain, tenderness, or weak-ness appears, CK should be measured immediately and the drug discontinued if activity is elevated significantly over baseline. The myopathy usually reverses promptly upon cessation of therapy. If the association is unclear, the patient can be rechallenged under close surveillance. Myopathy in the absence of elevated CK can occur. Rarely, hypersensitivity syndromes have been reported that include a lupus-like disorder and peripheral neuropathy.Reductase inhibitors should be temporarily discontinued in the event of serious illness, trauma, or major surgery.