The energy crisis has shown that for sustainable development in energy sector we must conserve the non-renewable conventional resources from its rapid depletion and replace them by non-polluting, renewable sources which are environmentally clean.

The energy crisis has shown that for sustainable development in energy sector we must conserve the non-renewable conventional resources from its rapid depletion and replace them by non-polluting, renewable sources which are environmentally clean.

Efforts are made to develop new sources of energy which is called non-conventional sources of energy. It would provide greater initiative to local people who could assess their needs and resources and plan a strategy that could be useful to them.

Solar energy is the energy obtained from the sun. The sun gives out vast amount of light and heat. It is only a little less than half (47 %) of solar energy which falls on the atmosphere reaches the earth’s surface. If we could use just a small part of this energy it would fulfill all the country’s need for power. Solar energy has advantages and also certain limitations.

The energy from the sun can be harnessed to provide power. The various devices used for harnessing sun’s energy are called solar energy devices.

Solar cells (Photovoltaic devices) is made up of silicon that converts sunlight directly into electricity. Solar cell produces electricity without polluting the environment. Since it uses no fuel other than sunlight, no harmful gases, no burning and no wastes are produced. These can be installed in remote and inacessible areas (forests and hilly regions) where setting up of power plant is expensive.

Arrangement of many solar cells side by side connected to each other is called solar panel. The capacity to provide electric cuurent is much increased in the solar panel. But the process of manufacture is very expensive. 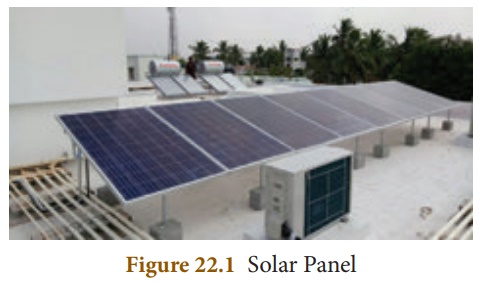 It consist of an insulated metal box or wooden box which is painted from inside so as to absorb maximum solar radiations. A thick glass sheet forms the cover over the box. The reflector is the plane mirror which is attached to the box. The food is cooked by energy radiated by the sun. 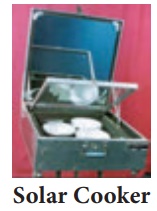 In solar thermal power plants, many solar panels are used to concentrate sun rays, to heat up water into steam. The steam is used to run the turbines to produce electricity.

Biogas is the mixture of methane (nearly 75 %), hydrogen sulphide, carbon dioxide and hydrogen. It is produced by the decomposition of animal wastes (cow dung) and plant wastes in the absence of oxygen. It is also commonly called as ‘Gobar gas’ since the starting material used is cow dung which means gobar in Hindi.

Shale refers to the soft finely stratified sedimentary rock that is formed from the compaction of small old rocks containing mud and minerals – such as quartz and calcite, trapped beneath earth’s surface. These rocks contain fossil fuels like oil and gas in their pores.

The fuel is extracted by a technique called hydraulic fracturing (drilling or well boring of sedimentary rocks layers to reach productive reservoir layers).

i.                     Shale drilling could affect groundwater reserves, which can contaminate the drinking water resources and also affect the fertility of the soil.

The kinetic energy possessed by the wind is due to its high speed, that can be converted into mechanical power by wind turbines. The wind energy can be used for (i) generating electricity (ii) Run water pumps, flour mills etc. (iii) Rotatory motion of windmill is used to draw water from wells.

Windmill is a machine that converts the energy of wind into rotational energy by broad blade attached to the rotating axis. When the blowing air strikes the blades of the windmill, it exerts force and causes the blades to rotate. The rotational movement of the blades operate the generator and the electricity is produced. The energy output from each windmill is coupled together to get electricity on a commercial scale. 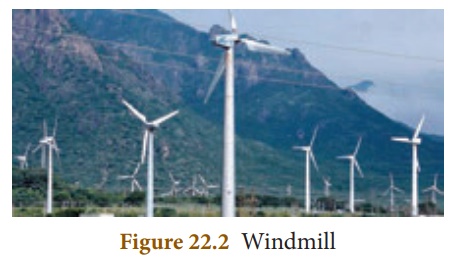 Earth’s surface is covered with nearly 71 % of water. Harnessing the energy from the flowing water can be used to produce electricity. The technique to harness the water energy is called Hydropower.

The electrical energy is derived from water flow, water falling from a height. Hilly areas are suitable for this purpose where there is continous flow of water in large amounts falling from high slopes. It does not cause environmental pollution or waste generation.

Hydropower plants converts the kinetic energy of flowing water into electricity. This is called hydroelectricity.

Tidal energy is the energy obtained from the movement of water due to ocean tides. Tides are the rise and fall of sea levels caused by the combined effects of the gravitational forces exerted on the oceans of the earth.

A tidal stream is a fast flowing body of water created by tides. Turbines are placed in tidal streams. When the tides hit the turbine, the turbine rotates and converts the tidal energy into electric energy