Nomenclature of compounds with functional groups

NOMENCLATURE OF COMPOUNDS WITH FUNCTIONAL GROUPS

Alkenes  and  alkynes  are  defined  by  adding  the  suffixes  -ene  and  -yne respectively. The stereochemistry of alkenes may need to be defined.

The simplest aromatic ring is benzene. Other important aromatic molecules include toluene, phenol, aniline, benzoic acid, and benzaldehyde. Any of these names can be used as parent names if other substituents are present. The posi- tion of substituents is determined by numbering round the ring, or in the case of disubstituted aromatic rings, the ortho, meta, para nomenclature.

Alcohols (or alkanols) are given the suffix -anol.

Ethers and alkyl halides are not identified with suffixes. Instead, these func-tional groups are considered to be substituents of the main alkane chain. The halogen of an alkyl halide is a halo substituent, while the ether is an alkoxy substituent.

Carboxylic acids and acid chlorides are identified by adding the suffix -anoic acid and -anoyl chloride respectively. Both these functional groups are always at the end of the main chain and do not need to be numbered.

Esters are named from the parent carboxylic acid and alcohol. The alkanoic acid is renamed alkanoate and the alkanol is treated as an alkyl substituent. The combined name is alkyl alkanoate. There must be a space between both parts of the name.

Amides are termed as alkanamides based on the parent carboxylic acid. If the amide nitrogen has alkyl groups, then these are considered as alkyl sub-stituents. The symbol N is used to show that the substituents are on the nitrogen and not some other part of the alkanamide skeleton.

Simple amines can be named by placing the suffix -ylamine after the root name. Other amines are named by considering the amino group as a sub-stituent of the main chain in the same way as alkyl halides and ethers.

Thiols are named by adding the suffix thiol to the name of the main alkane chain. Thioethers are named in the same way as ethers where the major alkyl substituent is considered to be the main chain with an alkylthio sub-stituent. Simple thioethers can be identified as dialkylsulfides.

Many of the nomenclature rules for alkanes hold true for molecules containing a functional group, but extra rules are needed in order to define the type of functional group present and its position within the molecule. The main rules are as follows:

i.The main (or parent) chain must include the functional group, and so may not necessarily be the longest chain (Fig. 1);

ii.The presence of some functional groups is indicated by replacing -ane for the parent alkane chain with the following suffixes:

iii.Numbering must start from the end of the main chain nearest the functional group. Therefore, the numbering should place the alcohol (Fig. 2) at position 1 and not position 4.

iv.The position of the functional group must be defined in the name. Therefore, the alcohol (Fig. 2) is a 1-butanol.

v.Other substituents are named and ordered in the same way as for alkanes. The alcohol (Fig. 2) has an ethyl group at position 2 and so the full name for the structure is 2-ethyl-1-butanol.

Alkenes and alkynes have the suffixes -ene and -yne respectively (Fig. 4). With some alkenes it is necessary to define the stereochemistry of the double bond. 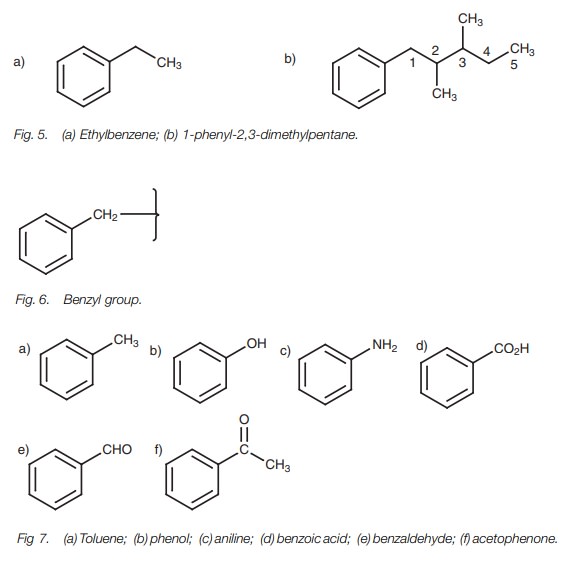 Benzene is not the only parent name which can be used for aromatic com- pounds (Fig. 7).

With disubstituted aromatic rings, the position of substituents must be defined by numbering around the ring such that the substituents are positioned at the lowest numbers possible, for example, the structure (Fig. 8) is 1,3-dichlorobenzene and not 1,5-dichlorobenzene. 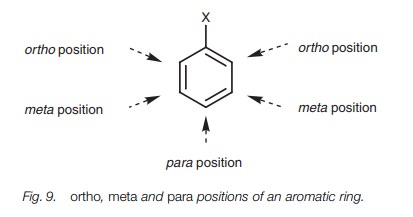 When more than two substituents are present on the aromatic ring, the ortho, meta, para nomenclature is no longer valid and numbering has to be used (Fig. 11). 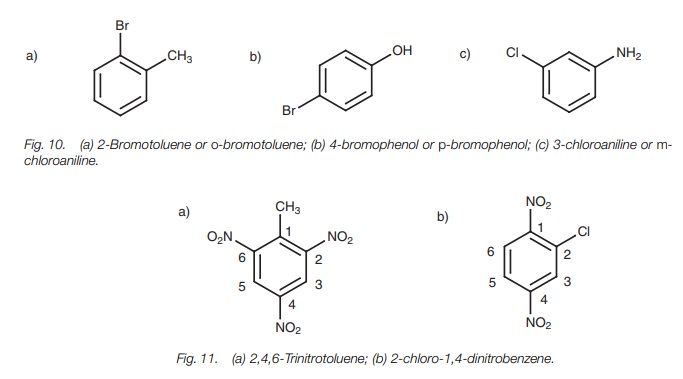 Once  again,  the  relevant  substituent  has  to  be  placed  at  position  1  if  the parent name is toluene, aniline, et cetera. If the parent name is benzene, the num-bering is chosen such that the lowest possible numbers are used. In the example shown, any other numbering would result in the substituents having higher numbers (Fig. 12).

Alcohols or alkanols are identified by using the suffix -anol. The general rules described earlier can be used to name alcohols (Fig. 13). 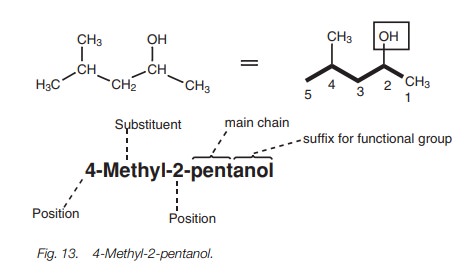 Note that ethers have two alkyl groups on either side of the oxygen. The larger alkyl group is the parent alkane. The smaller alkyl group along with the oxygen is the substituent and is known as an alkoxy group. 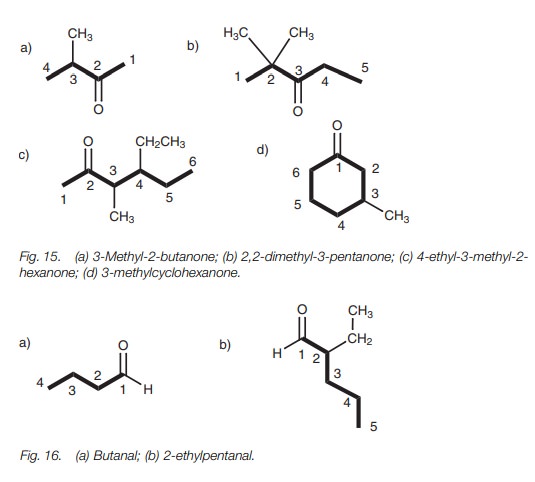 Carboxylic acids and acid chlorides are identified by adding the suffix -anoic acid and -anoyl chloride respectively. Both these functional groups are always at the end of the main chain and do not need to be numbered (Fig. 17).

To name an ester, the following procedure is carried out:

1.        identify the carboxylic acid (alkanoic acid) from which it was derived;

2.        change the name to an alkanoate rather than an alkanoic acid;

3.        identify the alcohol from which the ester was derived and consider this as an alkyl substituent;

If the carboxylic acid is linked with an amine, then the amide will have alkyl groups on the nitrogen. These are considered as alkyl substituents and come at the beginning of the name. The symbol N is used to show that the substituents are on the nitrogen and not some other part of the alkanamide skeleton. For example, the structure in Fig. 20 is called N-ethylethanamide.

The nomenclature for amines is similar to alkyl halides and ethers in that the main part (or root) of the name is an alkane and the amino group is considered to be a substituent (Fig. 21). Simple amines are sometimes named by placing the suffix -ylamine after the main part of the name (Fig. 22).

Amines having more than one alkyl group attached are named by identifying the longest carbon chain attached to the nitrogen. In the example (Fig. 23), that is an ethane chain and so this molecule is an aminoethane (N,N-dimethylaminoethane).

Some simple secondary and tertiary amines have common names (Fig. 24).

Thiols are named by adding the suffix thiol to the name of the parent alkane (Fig. 25a). Thioethers are named in the same way as ethers using the prefixalkylthio, for example, 1-(methylthio)propane (Fig. 25c). Simple thioethers can be named by identifying the thioether as a sulfide and prefixing this term with the alkyl sub- stituents, for example, dimethyl sulfide (Fig. 25b).