As mentioned, nitrate assimilation occurs in part, and in some species even mainly, in the roots. NH4+ taken up from the soil is normally fixed in the roots. The reduction of nitrate and nitrite as well as the fixation of NH4+ proceeds in the root cells analogously to that of the mesophyll cells. However, in the root cells the necessary reducing equivalents are supplied exclusively by oxidation of carbohydrates. In roots the reduction of nitrite and the subsequent fixation of NH4+ (Fig. 10.8) occur in the leucoplasts, a differentiated form of plastids . 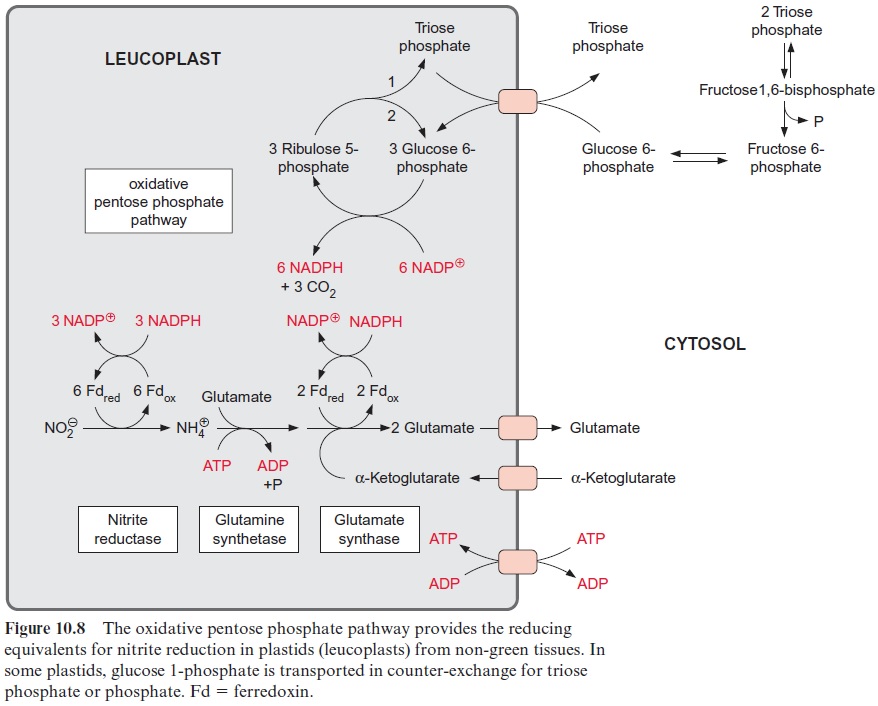 As in chloroplasts, nitrite reduction in leucoplasts also requires reduced ferredoxin as reductant. In the leucoplasts, ferredoxin is reduced by NADPH, which is generated by the oxidative pentose phosphate pathway. The ATP required for glutamine synthesis in the leucoplasts can be gener-ated by the mitochondria and transported into the leucoplasts by a plastid ATP translocator in counter-exchange for ADP. Also, the glutamate syn-thase of the leucoplasts uses reduced ferredoxin as redox partner, although some leucoplasts also contain a glutamate synthase that utilizes NADPH or NADH directly as reductant. Nitrate reduction in the roots provides the shoot with organic nitrogen compounds mostly as glutamine and asparag-ine via the transpiration stream in the xylem vessels. This is also the case when NH4+ is the nitrogen source in the soil.