Neuroendocrine Factors in the Pathophysiology of Depression

Depression is known to be associated with a number of hormonal abnormalities.

Neuroendocrine Factors in the Pathophysiology of Depression

Depression is known to be associated with a number of hormonal abnormalities. Among the most replicated of these findings are abnormalities in the HPA axis in patients with MDD. Moreover, MDD is associated with elevated cortisol levels (Figure 30–1), nonsuppression of adrenocorticotropic hormone (ACTH) release in the dexamethasone suppression test, and chronically elevated levels of corticotropin-releasing hormone. The significance of these HPA abnormalities is unclear, but they are thought to indicate a dysregu-lation of the stress hormone axis. More severe types of depression, such as psychotic depression, tend to be associated with HPA abnor-malities more commonly than milder forms of major depression. It is well known that both exogenous glucocorticoids and endogenous elevation of cortisol are associated with mood symptoms and cogni-tive deficits similar to those seen in MDD. 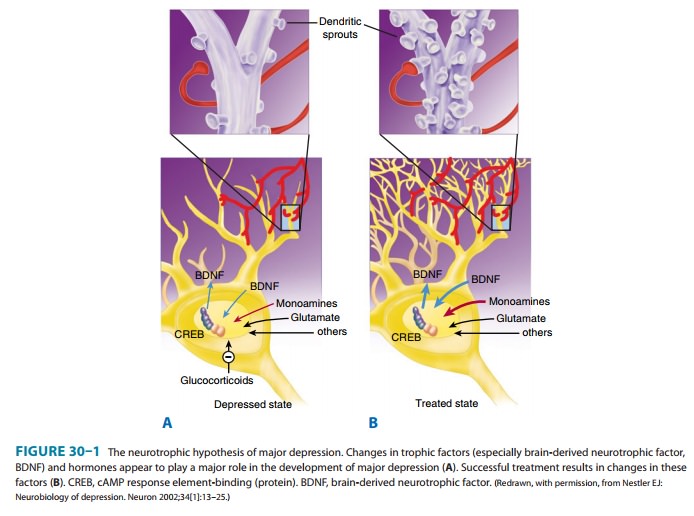 Thyroid dysregulation has also been reported in depressed patients. Up to 25% of depressed patients are reported to have abnormal thyroid function. These include a blunting of response of thyrotropin to thyrotropin-releasing hormone, and elevations in circulating thyroxine during depressed states. Clinical hypothyroidism often presents with depressive symp-toms, which resolve with thyroid hormone supplementation. Thyroid hormones are also commonly used in conjunction with standard antidepressants to augment therapeutic effects of the latter.

Finally, sex steroids are also implicated in the pathophysiology of depression. Estrogen deficiency states, which occur in the postpartum and postmenopausal periods, are thought to play a role in the etiology of depression in some women. Likewise, severe testosterone deficiency in men is sometimes associated with depressive symptoms. Hormone replacement therapy in hypogonadal men and women may be associated with an improvement in mood and depressive symptoms.