Monoamines and Other Neurotransmitters

The monoamine hypothesis of depression (Figure 30–2) suggests that depression is related to a deficiency in the amount or functionof cortical and limbic serotonin (5-HT), norepinephrine (NE), and dopamine (DA).

Monoamines and Other Neurotransmitters

The monoamine hypothesis of depression (Figure 30–2) suggests that depression is related to a deficiency in the amount or functionof cortical and limbic serotonin (5-HT), norepinephrine (NE), and dopamine (DA). 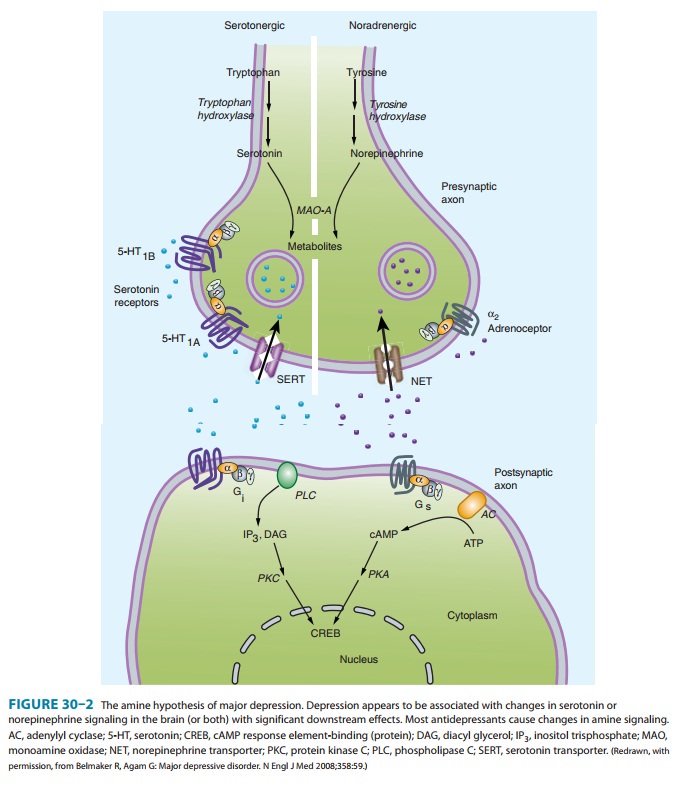 Evidence to support the monoamine hypothesis comes from several sources. It has been known for many years that reserpine treatment, which is known to deplete monoamines, is associated with depression in a subset of patients. Similarly, depressed patients who respond to serotonergic antidepressants such as flu-oxetine often rapidly suffer relapse when given diets free of tryp-tophan, a precursor of serotonin synthesis. Patients who respond to noradrenergic antidepressants such as desipramine are less likely to relapse on a tryptophan-free diet. Moreover, depleting cate-cholamines in depressed patients who have previously responded to noradrenergic agents likewise tends to be associated with relapse. Administration of an inhibitor of norepinephrine synthe-sis is also associated with a rapid return of depressive symptoms in patients who respond to noradrenergic but not necessarily in patients who had responded to serotonergic antidepressants.

Another line of evidence supporting the monoamine hypothesis comes from genetic studies. A functional polymor-phism exists for the promoter region of the serotonin trans-porter gene, which regulates how much of the transporter protein is available. Subjects who are homozygous for the s (short) allele may be more vulnerable to developing major depression and suicidal behavior in response to stress. In addi-tion, homozygotes for the s allele may also be less likely to respond to and tolerate serotonergic antidepressants. Conversely, subjects with the l (long) allele tend to be more resistant to stress and may be more likely to respond to serotonergic anti-depressants.

Studies of depressed patients have sometimes shown an alteration in monoamine function. For example, some studies have found evidence of alteration in serotonin receptor numbers (5-HT1A and 5-HT2C) or norepinephrine (α2) receptors in depressed and suicidal patients, but these findings have not been consistent. A reduction in the primary serotonin metabolite 5-hydroxyindoleacetic acid in the cerebrospinal fluid is associ-ated with violent and impulsive behavior, including violent sui-cide attempts. However, this finding is not specific to major depression and is associated more generally with violent and impulsive behavior.

The monoamine hypothesis, like the neurotrophic hypothe-sis, is at best incomplete. Many studies have not found an alteration in function or levels of monoamines in depressed patients. In addition, some candidate antidepressant agents under study do not act directly on the monoamine system. These include glutamate antagonists, melatonin agonists, and gluco-corticoid-specific agents. Thus, monoamine function appears to be an important but not exclusive factor in the pathophysiology of depression.