N. gonorrhoeae is a strict human pathogen. It is the causativeagent of gonorrhea, one of the most common sexually trans-mitted disease worldwide.

The genus Neisseria consists of Gram-negative, aerobic, nonsporing, nonmotile cocci, typically arranged in pairs (diplococci) with adjacent sides flattened together. The bacteria belonging to this genus are oxidase positive and mostly catalase positive. They ferment sugars with production of acid but no gas.

The genus Neisseria consists of 10 species. Neisseria gonorrhoeae and Neisseria meningitidis are the two important species that cause human infections. These two species are strictly pathogens for humans, whereas the other Neisseria species are commensals of the mouth and upper respiratory tract, and hence cause oppor-tunistic infections. Human infections caused by Neisseria are listed in Table 26-1. 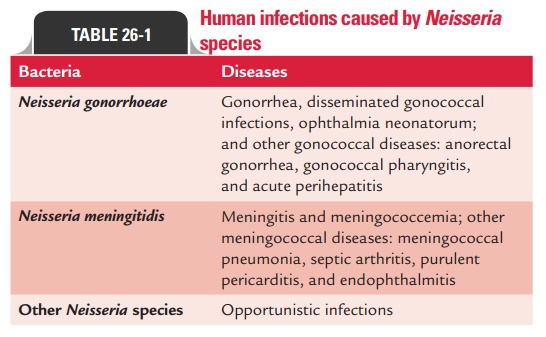 N. gonorrhoeae is a strict human pathogen. It is the causativeagent of gonorrhea, one of the most common sexually trans-mitted disease worldwide. Gonococci when transmitted non-sexually from the mother’s genital tract to the newborn during birth cause ophthalmia neonatorum.

·           N. gonorrhoeae are Gram-negative and aerobic diplococci.They are mostly intracellular—found within the polymor-phonuclear (PMN) leukocytes—and some cells contain as many as hundred cocci. Smears from the pus sample show the intracellular kidney-shaped cocci, typically arranged in pairs with concave sides facing each other.

·           Freshly isolated bacteria may be capsulated. They do not form endospores.

N. gonorrhoeae is a fastidious coccus. It requires complex mediafor growth. The cocci grow on enriched media, such as blood or chocolate agar. These cannot grow on ordinary media, such as nutrient agar or Mueller–Hinton agar. They are aerobes but can also grow anaerobically. They grow optimally at a temperature range of 35–36°C. They fail to grow at temperature less than 25°C or greater than 37°C. The growth of bacteria is enhanced by incubation in humid atmosphere supplemented with 5–10% CO2.

1.  Blood agar:  On blood agar at 24 hours, N. gonorrhoeaeproduces convex small colonies measuring 0.6 3 1.4 mmin diameter. These colonies are translucent with entireedges and finely granular surface. They are soft and eas-ily emulsifiable. Gonococci are inhibited by fatty acidsand trace metals present in the digested products of pep-tone found in the blood agar. Addition of soluble starchto the media neutralizes the toxic effects of the fattyacids.

·           Types 1 and 2 are small and are brown pigmented colo- nies. The strains producing these colonies possess pili, are virulent and cause acute cases of gonorrhea.

·           Types 3 and 4 are large and are nonpigmented colonies. The cocci producing these colonies do not possess pili and are avirulent.

3.Transport medium: Stuart’s transport medium is usedfor the collection and transport of clinical specimens to the laboratory for isolation and demonstration of N. gonorrhoeae.

·           Gonococci ferment glucose with the production of acid but no gas.

Susceptibility to physical and chemical agents: Thegonococci are highly delicate bacteria. They die rapidly on drying. They are also killed by soap, and many other disinfec-tants, such as phenol, chlorhexidine, and hexachlorophene and antiseptics. They are killed at a temperature as low as 25°C. Freeze drying or storing in liquid nitrogen are the most effec-tive methods for storage of gonococci for a longer period.