Indian Railways has decided to introduce on its system a need-based concept of USFD testing based on a Russian concept. As per the present policy, need-based rail inspection is being progressively introduced on A (not covered by the SPURT car), B, and D routes on Indian Railways.

Indian Railways has decided to introduce on its system a need-based concept of USFD testing based on a Russian concept. As per the present policy, need-based rail inspection is being progressively introduced on A (not covered by the SPURT car), B, and D routes on Indian Railways. The introduction of this concept will require changing the present classification of defects, frequency of inspection, detection equipment, organization, etc.

The following are the important features of the need-based scheme of USFD testing.

Traffic density and periodicity In the need-based concept, the stipulated frequency of ultrasonic inspection is one after the passage of every 8 GMT, with periodicity varying from 2 to 6 months, depending on the sectional GMT.

Defect size Under the concept, a defect size of 12 mm and above in the head and 5 mm and above in the web junction is taken into account for the classification of defects. Therefore, defects sized below 12 mm and 5 mm are allowed to continue in the tracks as unclassified defects. Further, the same size of artificial flaw, i.e., 12 mm, is considered when classifying the weld defect too. Attenuation or absorption of ultrasonic energy is supposed to be more in SKV/AT welded joints due to coarse grain, whereas absorption of energy is less in rail steel. (SKV is a German word meaning short preheating. AT denotes alumino thermit.) Obviously, the specified 60% peak height will not be available in the same grain setting in the case of welds.

Frequency of testing of rails and welds An inspection frequency of 8 GMT has been prescribed for the need-based concept of ultrasonic testing. A higher inspection frequency may be fixed depending upon the incidence of defects. In view of this, whenever the defect generation rate (failures in service and defects detected during USFD inspection) exceeds 1 per km between successive tests in a stretch, the inspection frequency should be doubled in that particular stretch. When calculating the defect generation rate, only rail defects (IMR) or fractures with an apparent origin other than the bolt area and detectable by USFD should be considered.

Testing of rails After the initial testing of rails in the rail manufacturing plant, the first re-test normally need not be done until the rails have covered 15% of their service life in GMT as given in Table 6.11. For rails rolled in April 1999 and later, the test-free period will be 25% instead of 15%.

Whenever rails are not tested in the rail manufacturing plant, the test-free period will be applicable, and rail testing will be done at the periodic interval given in Table 6.12 right from the day of its laying in the field. This table gives the frequency of ultrasonic testing after the passage of 8 GMT, subject to a maximum interval of one year.

Table 6.12   Frequency of ultrasonic testing for all BG routes

In the need-based concept, the actions suggested in Table 6.13 are taken when defective rails are detected.

Table 6.13   Action to be taken after detection of rail/weld defects 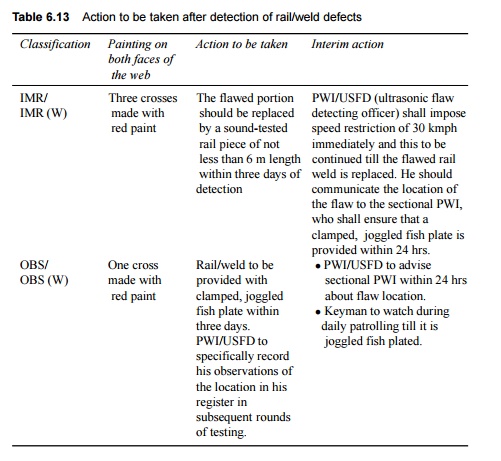