Multiprocessor Operating System refers to the use of two or more central processing units (CPU) within a single computer system.

ü Multiprocessor Operating System refers to the use of two or more central processing units (CPU) within a single computer system. These multiple CPUs are in a close communication sharing the computer bus, memory and other peripheral devices. These systems are referred as tightly coupled systems. 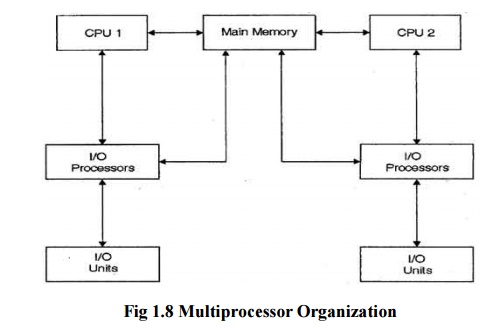 ü Multiprocessing system is based on the symmetric multiprocessing model, in which each processor runs an identical copy of operating system and these copies communicate with each other. In this system processor is assigned a specific task. A master processor controls the system. This scheme defines a master-slave relationship.

ü In order to employ multiprocessing operating system effectively, the computer system must have the followings:

ü Processors those are capable of being used in a multiprocessing system.

ü The whole task of multiprocessing is managed by the operating system, which allocates different tasks to be performed by the various processors in the system.

ü Multiprocessor system supports the processes to run in parallel. Parallel processing is the ability of the CPU to simultaneously process incoming jobs. This becomes most important in computer system, as the CPU divides and conquers the jobs. Generally the parallel processing is used in the fields like artificial intelligence and expert system, image processing, weather forecasting etc.

ü In a multiprocessor system, the dynamically sharing of resources among the various processors may cause therefore, a potential bottleneck. There are three main sources of contention that can be found in a multiprocessor operating system:

v In order to provide safe access to the resources shared among multiple processors, they need to be protected by locking scheme. The purpose of a locking is to serialize accesses to the protected resource by multiple processors. Undisciplined use of locking can severely degrade the performance of system.

v The continuous accesses to the shared data items by multiple processors (with one or more of them with data write) are serialized by the cache coherence protocol. Even in a moderate-scale system, serialization delays can have significant impact on the system performance.

v In addition, bursts of cache coherence traffic saturate the memory bus or the interconnection network, which also slows down the entire system. This form of contention can be eliminated by either avoiding sharing or, when this is not possible, by using replication techniques to reduce the rate of write accesses to the shared data.

v This form of contention arises when unrelated data items used by different processors are located next to each other in the memory and, therefore, share a single cache line: The effect of false sharing is the same as that of regular sharing bouncing of the cache line among several processors. Fortunately, once it is identified, false sharing can be easily eliminated by setting the memory layout of non-shared data.