Improve the utilization of computers.

Jobs were submitted on cards or tape to an operator who batches jobs together sequentially. The program that controls the execution of the jobs was called monitor - a simple version of an operating system. The interface to the monitor was accomplished through Job Control Language (JCL). For example, a JCL request could be to run the compiler for a particular programming language, then to link and load the program, then to run the user program.

Memory protection: do not allow the memory area containing the monitor to be altered

Timer: prevents a job from monopolizing the system

Bad utilization of CPU time - the processor stays idle while I/O devices are in use.

More than one program resides in the main memory. While a program A uses an I/O device the processor does not stay idle, instead it runs another program B. 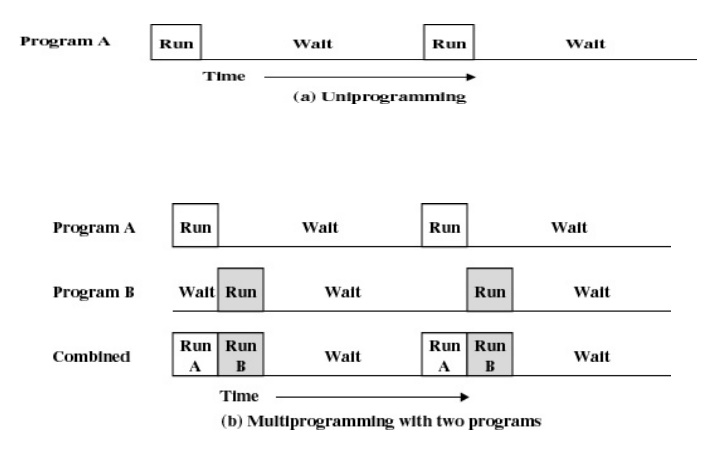 Memory management - to have several jobs ready to run, they must be kept in main memory

Job scheduling - the processor must decide which program to run.

The OS provides certain services to programs and to the users of those programs.

A running program may require I/O. This I/O may involve a file or an I/O device.

The program needs to read, write, create and delete files.

The operating system constantly needs to be aware of possible errors. Errors may occur in the CPU and memory hardware (such as a memory error or a power failure), in I/O devices (such as a parity error on tape, a connection failure on a network, or lack of paper in the printer), and in the user program (such as an arithmetic overflow, an attempt to access an illegal memory location, or a too-great use of CPU time). For each type of error, the operating system should take the appropriate action to ensure correct and consistent computing.

Different types of resources are managed by the Os.

When there are multiple users or multiple jobs running at the same time, resources must be allocated to each of them.

We want to keep track of which users use how many and which kinds of computer resources. This record keeping may be used for accounting or simply for accumulating usage statistics.

The owners of information stored in a multiuser computer system may want to control use of that information. Security of the system is also important.