The mucosal immune system is distinct from its systemic counterpart.

The mucosal immune system is distinct from its systemic counterpart. The peripheral immune system is characterized primarily by its ability to eradicate foreign antigens and functions in a relatively antigen-free environment. In contrast, the mucosal immune system is in con-stant juxtaposition with luminal flora and dietary proteins. Therefore, instead of mounting active immune responses, which would result in devastating consequences to the host, the general immune response of the gut is suppression. These responses are supported by several phenomena that have been observed in the gut, including oral tolerance and controlled or physiolog-ical inflammation. Suppression appears to be a selective process, as it does not pre-clude the ability of the gut to mount appro-priate responses to pathogens (e.g., secre-tory IgA response). This emphasizes the dynamic ability of the mucosal immune system to adapt to environmental stimuli in a way that best suits the needs of the host. Aberrations in this balance result in inflammatory diseases of the bowel and food allergy.

The alternative pathways of immune regulation observed in the mucosal immune system are most likely explained by the distinct organization of the lym-phoid structures and lymphocyte popu-lations that are present. At this point, study of the anatomy and components of the mucosal immune system will facili-tate understanding of the mechanisms involved in both health and disease of the gastrointestinal (GI) tract.

Anatomy of the Gut-Associated Lymphoid Tissue

Anatomically, the gut-associated lymphoid tissue (GALT) is composed of a single layer of epithelial cells separating the external environment from the underlying loose connective tissue, the lamina propria (LP) (Figure 14.1). Two general categories of defenses that serve to protect the mucosa are innate and adaptive (Figure 14.2). Innate defenses include both physical and chemical barriers. The first line of defense includes the glycocalyx and mucous coat, which cover the epithelium. Bacteria and viral particles are trapped in the mucous, and these are subsequently expelled from the body through rectal, vaginal, and nasal secretions. The epithelium also prevents the entry of microorganisms into the LP. Breeches in the epithelium are rapidly restored by intestinal trefoil factors. Some pathogens are capable of invading the host through penetration of the epithelium, but the tight junctions that join the epithelial cells are virtually impermeable to foreign particles. The crypt epithelium in the small intestine (Paneth cells) produces defensins that inhibit bacterial growth. In addition, 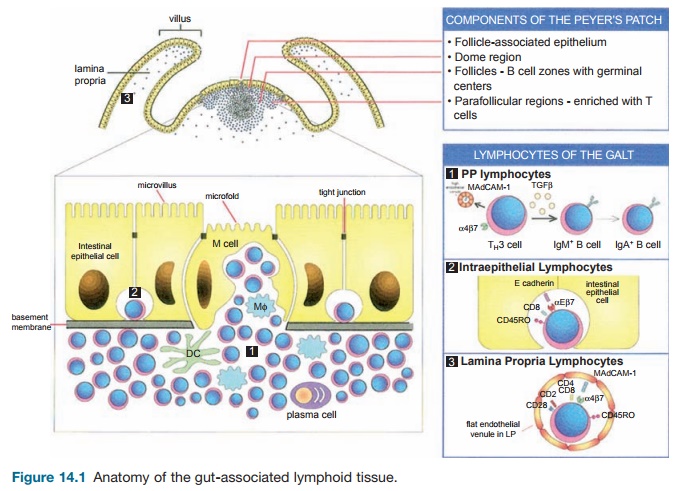 enzymes such as papain, pepsin, trypsin, chymotrypsin, and pancreatic proteases allow for the destruction and degradation of antigens to nonimmunogenic di- and tri-peptides. 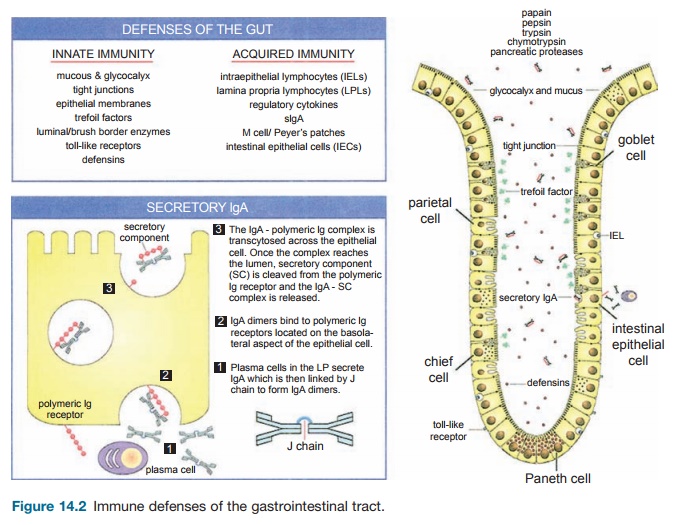 Within the GALT, lymphocytes are found at three sites in the mucosa (Figure 14.1). These lymphocytes, in addi-tion to secretory IgA (SIgA) make up the adaptive arm of mucosal immunity. Lym-phocytes are found in the Peyer’s patch (PP) – the main organized lymphoid tissue of the GALT, in the epithelial layer, and in the LP. Each group has demonstrated spe-cial characteristics, which will be discussed in detail later.

The GALT also contains cells that may be indirectly responsible for the initiation or down-regulation of immune responses through their role as antigen-sampling cells. One such cell is the M (microfold) cell or follicle-associated epithelium, which overlies the PP. These cells lack a glycocalyx or microvilli. They allow for the uptake and transport of particulate antigens to the underlying PP, which ultimately results in an active immune response. Intestinal epithelial cells (IECs), which make up the majority of the epi-thelial layer, are capable of sampling soluble antigens and have been observed to stimulate regulatory CD8+ T-cell popu-lations, suggesting their role in the path-ways involved in down-regulation of the immune response.

Lymphocyte Populations of the GALT

Intraepithelial lymphocytes (IELs) are predominantly CD8+ T cells situated between epithelial cells of the mucosa, on the basement membrane. These cells express a variety of activation markers

including CD45RO+, which is characteris-tic of memory cells. The function of these cells is uncertain as they demonstrate lit-tle proliferation when activated through their T-cell receptor (TCR). Some studies suggest that they may be cytotoxic and involved in maintaining the health of the epithelium. They do not appear to move in and out of the epithelium as epithelial cells generally grow over them. IELs express the surface molecule,αEβ7, which recog-nizes the ligand E-cadherin on epithelial cells. Unlike α4β7 (a mucosal addressin discussed with lamina propria lympho-cytes TH3 cells), αEβ7 does not appear to be a homing molecule because the number of IELs is not significantly decreased when this integrin is knocked out by targeted gene deletion. Transforming growth fac-tor β (TGF-β) induces the expression of this integrin.

Unlike IELs, which are predominantly T cells, lamina propria lymphocytes (LPLs) represent a heterogeneous mix of IgA plasma cells, T cells, B cells, macrophages, and dendritic cells. Similar to IELs, LPLs express an activated memory phenotype. They express the mucosal addressin α4β7 and up to 40 percent express αEβ7. Simi-lar to IELs, they do not respond to signals mediated through TCRs but rather can be activated through alternate pathways such as CD2 and CD28. This down-regulated response to TCR activation in both LPLs and IELs suggests this mechanism may be a means by which the mucosal immune system dampens the response to luminal flora and diet.

Particulate antigens taken up by the M cells are ultimately presented to the lymphocyte populations in the PP through macrophages and dendritic cells. One such lymphocyte population, commonly referred to as TH3 cells, secretes a key sup-pressor cytokine, TGF-β. The significance of TGF-β will become evident with the discussion of secretory IgA and oral tol-erance. These lymphocytes can migrate systemically from the PP to other mucosal sites, which comprise the common muco-sal immune system (described later). These activated cells express surface molecules, α4β7, which provide a homing signal for mucosal sites through the ligand MAd-CAM-1. Specifically in the gut, they can home to the LP where they are terminally differentiated (e.g., into plasma cells for B cells).

Evidence suggests that the various mucosa-associated lymphoid tissues (MALT) throughout the body are part of a common mucosal immune system. One study intro-duced labeled PP lymphocytes in mice by injection and observed the pathway they appeared to migrate from the PP to the mesenteric lymph nodes, the thoracic duct, the inferior vena cava, the systemic circu-lation, and finally to the LP. These labeled lymphocytes could also be found in the LP throughout the remainder of the GI tract, in the mammary gland, and the lung and genitourinary tract. More recent studies suggest there is compartmentalization in the MALT; in other words, immunizing at one site induces lymphocytes with a pref-erence for migration to certain MALT sites over others. For instance, GI tract immuni-zation provides effector cells throughout the gut and mammary gland as demon-strated by SIgA in breast milk, while nasal and intratracheal immunization results in lymphocytes in the lung, genitourinary tract, and rectum. The important implica-tion is that immunization at one site can confer protection at another.

Although IgG is the most abundant immu-noglobulin in the serum, secretory IgA (SIgA) is the most abundant immunoglob-ulin in secretions. Serum IgA is a mono-mer, whereas SIgA exists as a dimer bound together by J (joining) chain (Figure 14.2). TGF-β initiates class switching of B cells within the PP from production of IgM to IgA. The basolateral surface of the epithe-lial cell expresses the polymeric immuno-globulin receptor (pIgR), which serves as a site of attachment for SIgA produced by LP plasma cells. Once bound to the pIgR, the SIgA–pIgR complex is endocytosed within vesicles and transported to the apical sur-face where proteolysis of the pIgR occurs. The proteolytic fragment of the pIgR is called the secretory component (SC), and it remains complexed to SIgA following secretion into the lumen of the gut. SC, a 55-kDa fragment, protects IgA against enzymatic (papain, pepsin) degradation by wrapping itself around the Fc portion of the dimeric antibody. The SIgA–SC com-plex remains situated in the mucous coat where it binds up bacterial and viral par-ticles, preventing their attachment to the epithelium.

Secretory IgA complexed with anti-gens in the lumen is recycled through the enterohepatic circulation. After the SIgA-antigen complex is absorbed in the distal small intestine, it travels to the liver sinusoids through the portal vein, where Kupffer cells take up the complex, destroy the microorganism, and release free SIgA. The pIgR seen on the gut epithelial

cells is also expressed on the basal surface of bile duct epithelium. This epithelium takes up the free SIgA and transports it into the bile duct. Bile containing SIgA then flows to the duodenum to be reused in the gut lumen.

M cells sample particulate antigens such as intact bacteria, viruses, and parasites. This process ultimately leads to an immune response to clear these potentially harmful and infectious agents. IECs, however, have been found to sample soluble antigens. Studies have demonstrated that IECs, a type of nonclassical antigen-presenting cell, express class I and class II major his-tocompatibility complex (MHC) molecules constitutively. However, they have been shown to activate CD8+ T cells through expression of the nonclassical MHC class I molecule CD1d. This restriction element interacts with gp180, a member of the carcinoembryonic antigen family, which binds to CD8.

There are several phenomena that sup-port the idea that suppression is the gen-eral response of the gut. One of these is oral tolerance (OT), which is defined as the active nonresponse to a soluble antigen that is administered through the oral route. H. G. Wells carried out one of the first doc-umented experiments demonstrating this phenomenoninguineapigs.Byfeedingthem ovalbumin (OVA), he was subsequently unable to elicit an allergic/anaphylactic response when OVA was introduced sys-temically. This tolerant state has been deter-mined to be active as it can be transferred to a naïve recipient by T cells.

Multiple mechanisms are involved in the induction of OT. Low-dose tolerance is mediated by the CD4+ cells secreting the cytokines TGF-β, IL-10, and IL-4. Higher doses of fed antigens can induce anergy or deletion. Antigen-specific CD8+ suppressor T cells may also play a role in this process. Loss of OT may be the mechanism respon-sible for the immune response to commen-sal flora and dietary antigens, leading to food allergies and possibly inflammatory bowel disease (IBD).

Oral tolerance has recently gained much interest as it proposes a mecha-nism by which to generate suppression to specific antigens. Several groups have suggested its use in the treatment of autoimmune/inflammatory disorders. Autoantigen can be fed to hosts, which would then result in the stimulation of regulatory T cells to these same antigens. Although induction of OT is specific for a given antigen, the effector response is not. This induction is potentially due to the effects of suppressive cytokines such as TGF-β; that is, by feeding an antigen situated in close proximity to the auto-antigen of interest, you can suppress an immune response to both antigens. Thus, you do not necessarily need to feed the antigen to which the autoreactive response is targeted. This process has been termed bystander suppression.