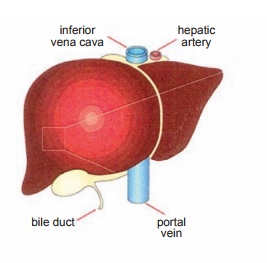 The liver is essential in metabolism, the removal of pathogens and antigens from the blood, and the synthesis of proteins.

The liver is essential in metabolism, the removal of pathogens and antigens from the blood, and the synthesis of proteins. As a result, it is exposed to numerous antigens and by-products of gastrointestinal metab-olism on a daily basis. It is critical that the liver is able to mount active responses to eliminate microorganisms while avoiding unnecessary immune responses toward innocuous antigens, which could also result in injury to hepatocytes. Similar to the gut, the liver has a natural tendency toward immune tolerance rather than the induction of immunity.

Anatomically, the liver is divided into functional units termed hepatic lobules (Figure 14.5). These lobules are hexagonally shaped and consist of a central venule or vein and portal triads at its corners. Within the lobule, the hepatic sinusoids – the walls of which comprise liver sinusoidal 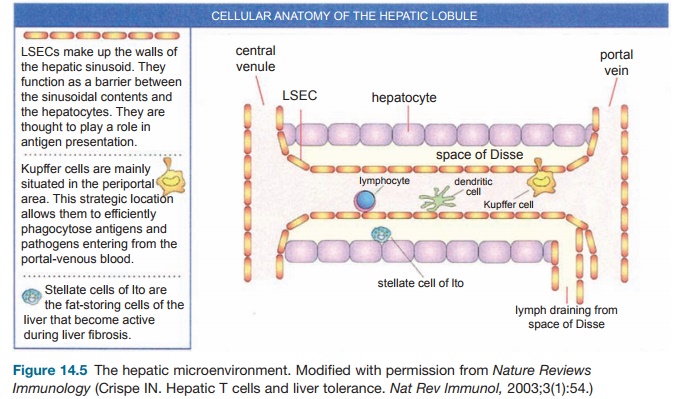 endothelial cells (LSECs) – serve as a res-ervoir for the mixing of blood from both portal venous and arterial blood. Kupffer cells and lymphocytes are found in the sinusoidal lumen, adhering to the LSECs. Although the LSECs are fenestrated, it appears that they serve as a barrier to prevent leucocytes from reaching hepato-cytes. The LSECs have a role in receptor-mediated endocytosis of macromolecules, which are believed to be subsequently transported to hepatocytes for metabo-lism. The LSECs are also believed to con-tribute to the activation of CD4+ and CD8+ cells as they constitutively express all mol-ecules necessary for antigen presentation, and hence allow for immunity to harmful pathogens.

In vitro experiments have suggested that endothelial cells activate naïve T cells, but do not differentiate into effector T cells. Rather, these cells have been found to secrete cytokines and express a pheno-type that is consistent with the induction of tolerance. Other cell populations such as dendritic cells and Kupffer cells may contribute to tolerance induction by dele-tion or apoptosis of T cells.