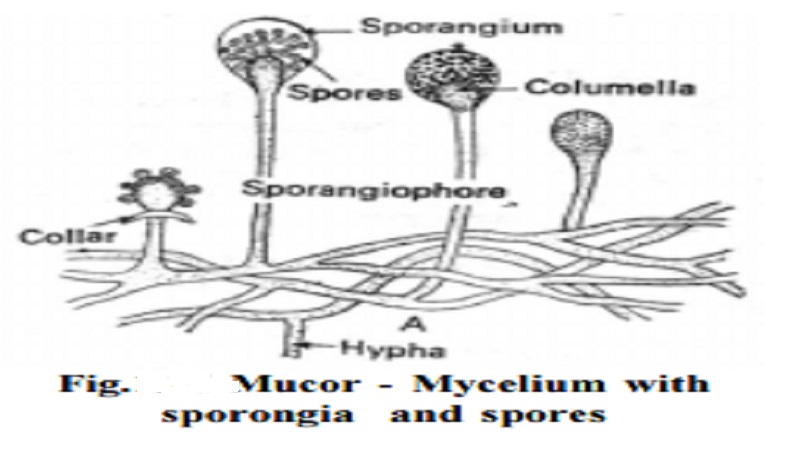 Occurrence : Mucor is a saprotrophic fungus. The appearance of the sporangiophores and sporangia resembles a collection of pins and hence it is commonly known as 'pin mould' . As the matured sporangia are black in colour, it is also called 'black bread mold' . There are more than 50 species that have been reported in this genus. It grows on dung (eg : Mucor mucedo), wet shoes, stale moist bread, rotton fruit, decaying vegetables and other stale organic media. It can be grown easily in the laboratory on a piece of moist bread or on horse dung kept under a bell jar in a warm place for three or four days.

Somatic structure : The body of Mucor is composed of a mass of white, delicate, cottony threads collectively known as mycelium. It is always much branched and coenocytic i.e. aseptate and multinucleate. Each thread of the mycelium is known as hypha which is aseptate. The mycelium spreads in all directions over the substratum. Some of the hyphal branches penetrate down into the substratum to absorb water and nutrients.

Reproduction : This takes place vegetatively, asexually and sexually. The asexual reproduction by formation of spores is very common in Mucor.

Vegetative reproduction : Fragmentation of the mycelium results in the multiplication of the fungus by developing fresh stock of mycelia. 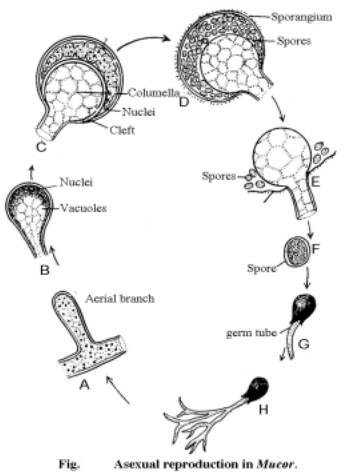 Sporangiospores or spores : Mucor readily reproduces asexually by forming sporangiospores or spores (Fig.). Here the spores are produced in sporangia. Under favourable conditions of moisture and temperature, numerous slender, erect hyphae calledsporangiophores arise from the mycelium. These sporangiophores are hyaline and do not produce rhizoids at their base. The apex of the sporangiophore enlarges to form a vesicle which may be globose or spherical, multispored and columellate structure - thesporangium. As the hypha begins to swell, the protoplasmic contents migrate to its tip and accumulate there. The protoplasm differentiates into a central vacuolated region and an outer fertile dense peripheral region containing large number of nuclei. The central vacuolated region is separated from the peripheral