Theorems of Area-Moment Method: Theorem I: The change in slope between the tangents drawn to the elastic curve at any two points A and B is equal to the product of 1/EI multiplied by the area of the moment diagram between these two points.

The change in slope between the tangents drawn to the elastic curve at any two points A and B is equal to the product of 1/EI multiplied by the area of the moment diagram between these two points.

The deviation of any point B relative to the tangent drawn to the elastic curve at any other point A, in a direction perpendicular to the original position of the beam, is equal to the product of 1/EI multiplied by the moment of an area about B of that part of the moment diagram between points A and B.

2.     Measured from left tangent, if ? is counterclockwise, the change of slope is positive, negative if ? is clockwise.

What is a Column or Strut?

Any machine member, subjected to the axial compressive loading is called a strut and the vertical strut is called column

Ideally, the columns should fail by crushing or compressive  stress and it normally happens for the short columns, however, the long columns, most of the times,  failure occurs by buckling.

To get the correct results, this formula should only be applied for the long columns. The buckling load calculated by the Euler formula is given by:

Equivalent length of a column

A stick of timber, a bar of  iron, etc., when used to sustain end loads which act lengthwise of the pieces, are called  columns, posts, or struts if they are so long that they would bend before breaking. When they are so short that they would not bend before breaking, they are called short blocks, and their compressive  strengths are computed by means of equation 1. The strengths of columns cannot, however, be so simply determined, and we now proceed to explain the  method of computing them.

77. End  Conditions. The strength of a column depends in part on the way in which its ends bear, or are joined to other parts of a  structure, that is, on its " end conditions." There are practically but three kinds of end conditions, namely:

(1)             When a column is fastened to its  support at one end by means of a pin about which the column could rotate if the other end were free, it is said to be "hinged" or "pinned" at the former end. Bridge posts or columns are often hinged at the ends.

(3)             Columns are sometimes riveted near their ends directly to other parts of the structure and do not bear directly on their ends; such are called " fixed ended." A column which bears on its flat ends is often fastened near the ends to other parts of the structure, and such an end is also said to be " fixed." The fixing of an end of a column stiffens and therefore strengthens it more or less, but the strength of a column with fixed ends is computed as though its ends were flat. Accordingly we have, so far as strength is concerned, the following classes of columns: 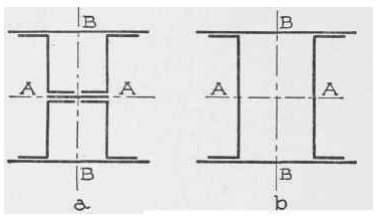 70. Cross=sections of Columns. Wooden columns are usually  solid, square, rectangular, or round in section; but sometimes they are "built up" hollow.  Cast-iron columns are practically always made hollow, and rectangular or round in section. Steel columns are made of single rolled shapes - angles, zees,  channels, etc.; but the larger ones are usually "built up" of several shapes. Fig. 46, a, for  example, represents a cross-section of a "Z-bar" column; and Fig. 46, b, that of a "channel" column.

80. Radius of Gyration. There is a quantity appearing in almost all formulas for the strength of columns, which is called "radius of gyration." It depends on the form and extent of the cross-section of the column, and may be defined as follows:

2. Prove that the value of the radius of gyration given for the hollow square in Table A, page 54, is correct.