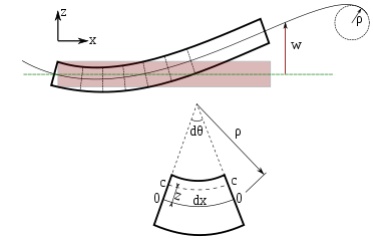 The curve w(x) describes the deflection w of the beam at some position x (recall that the beam is modeled as a one-dimensional object). q is a distributed load, in other words a force per unit length (analogous to  pressure being a force per area); it may be a function of x, w, or other variables.

Note that E is the  elastic modulus and that I is the  second moment of area. I must be calculated with respect to the centroidal axis perpendicular to the applied loading. For an Euler-Bernoulli beam not under any axial loading this axis is called the  neutral axis.

The stresses in a beam can be calculated from the above expressions after the deflection due to a given load has been determined.

The double integration method is a powerful tool in solving deflection and slope of a beam at any point because we will be able to get the equation of the elastic curve.

This equation is simpler than the fourth-order beam equation and can be integrated twice to find w if the value of M as a function of x is known. For general loadings, M can be expressed in the form

Ordinarily, when integrating P(x - a) we get

However, when integrating expressions containing Macaulay brackets, we have

with the difference between the two expressions being contained in the constant Cm. Using these integration rules makes the calculation of the deflection of Euler-Bernoulli beams simple in situations where there are multiple point loads and point moments. The Macaulay method predates more sophisticated concepts such as  Dirac delta functions and  step  functions but achieves the same outcomes for beam problems. 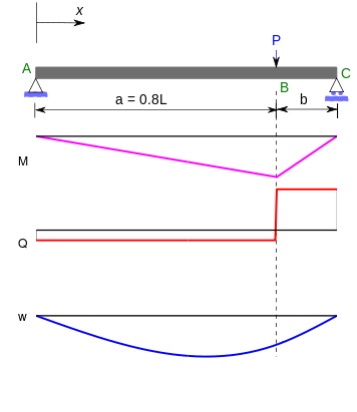 An illustration of the Macaulay method considers a simply supported beam with a single eccentric concentrated load as shown in the adjacent figure. The first step is to find M. The reactions at the supports A and C are determined from the balance of forces and moments as

Using the moment-curvature relation and the Euler-Bernoulli expression for the bending moment, we have 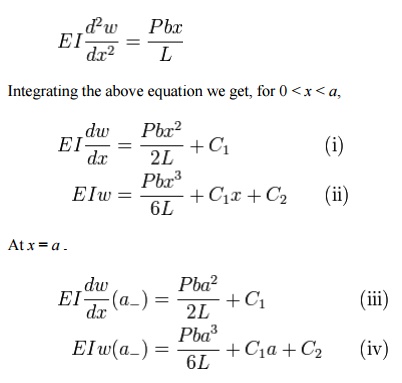 In Macaulay's approach we use the  Macaulay bracket form of the above expression to represent the fact that a point load has been applied at location B, i.e., 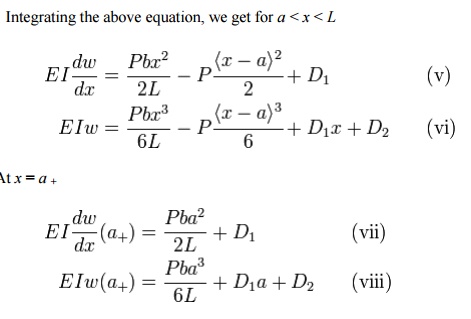 Comparing equations (iii) & (vii) and (iv) & (viii) we notice that due to continuity at point B, C1 = D1 and C2 = D2. The above observation implies that for the two regions considered, though the equation for  bending moment and hence for the  curvature are different, the constants of integration got during successive integration of the equation for curvature for the two regions are the same.

The above argument holds true for any number/type of discontinuities in the equations for curvature, provided that in each case the equation retains the term for the subsequent region

Reverting back to the problem, we have

Note that the constants are placed immediately after the first term to indicate that they go with the first term when x < a and with both the terms when x > a. The Macaulay brackets help as a reminder that the quantity on the right is zero when considering points with x < a.