The ratio of the effective length of a column to the least radius of gyration of its cross section is called the slenderness ratio (sometimes expressed with the Greek letter lambda, ). 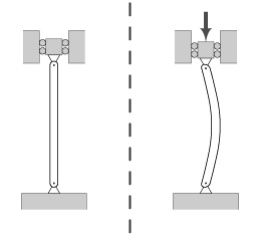 The eccentricity of the axial force results in a bending moment acting on the beam element.

The ratio of the effective length of a  column to the least  radius of gyration of its cross section is called the slenderness ratio (sometimes expressed with the Greek letter lambda, ?). This ratio affords a means of classifying columns. Slenderness ratio is important for design considerations. All the following are approximate values used for convenience.

·        A short  concrete column is one having a ratio of unsupported length to least dimension of the cross section not greater than 10. If the ratio is greater than 10, it is a long column (sometimes referred to as a slender column).

·         Timber columns may be classified as short columns if the ratio of the length to least dimension of the cross section is equal to or less than 10. The dividing line between intermediate and long timber columns cannot be readily evaluated. One way of defining the lower limit of long timber columns would be to set it as the smallest value of the ratio of length to least cross sectional area that would just exceed a certain constant K of the material. Since K depends on the  modulus of elasticity and the allowable compressive  stress parallel to the grain, it can be seen that this arbitrary limit would vary with the  species of the timber. The value of K is given in most structural handbooks.

If the load on a column is applied through the  center of gravity of its cross section, it is called an  axial load. A load at any other point in the cross section is known as an  eccentric load. A short column under the action of an axial load will fail by direct compression before it buckles, but a long column loaded in the same manner will fail by buckling  (bending), the buckling effect being so large that the effect of the direct load may be neglected. The intermediate-length column will fail by a combination of direct compressive stress and bending.

In 1757,  mathematician Leonhard Euler derived a formula that gives the maximum axial load that a long, slender, ideal column can carry without buckling. An ideal column is one that is perfectly straight, homogeneous, and free from initial stress. The maximum load, sometimes called the critical load, causes the column to be in a state of unstable  equilibrium; that is, the introduction of the slightest lateral force will cause the column to fail by buckling. The formula derived by Euler for columns with no consideration for lateral forces is given below. However, if lateral forces are taken into consideration the value of critical load remains approximately the same.

I =  area moment of inertia,

K = column effective length factor, whose value depends on the conditions of end support of the column, as follows.

For one end fixed and the other end free to move laterally, K = 2.0. KL is the effective length of the column.

Examination of this formula reveals the following interesting facts with regard to the load-bearing ability of slender columns.

1.      Elasticity and not compressive  strength of the materials of the column determines the critical load.

2.     The critical load is directly  proportional to the  second moment of area of the cross section. 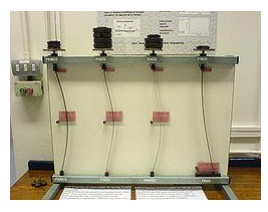 Another bit of information that may be gleaned from this equation is the effect of length on critical load. For a given size column, doubling the unsupported length quarters the allowable load. The restraint offered by the end connections of a column also affects the critical load. If the connections are perfectly rigid, the critical load will be four times that for a similar column where there is no resistance to rotation (hinged at the ends).

Since the moment of inertia of a surface is its area multiplied by the square of a length called the radius of gyration, the above formula may be rearranged as follows. Using the Euler formula for hinged ends, and substituting A·r2 for I, the following formula results.

where F / A is the allowable stress of the column, and l / r is the slenderness ratio.

Since structural columns are commonly of intermediate length, and it is impossible to obtain an ideal column, the Euler formula on its own has little practical application for ordinary design. Issues that cause deviation from the pure Euler strut behaviour include imperfections in geometry in combination with plasticity/non-linear stress strain behaviour of the column's material. Consequently, a number of empirical column formulae have been developed to agree with test data, all of which embody the slenderness ratio. For design, appropriate  safety factors are introduced into these formulae. One such formular is the  Perry  Robertson formula which estimates of the critical buckling load based on an initial (small) curvature. The Rankine Gordon fomular is also based on eperimental results and surgests that a strut will buckle at a load Fmax given by:

where Fe is the euler maximum load and Fc is the maximum compresive load. This formular typically produces a conservative estimate of Fmax.

A free-standing, vertical column, with density ?, Young's modulus E, and radius r, will buckle under its own weight if its height exceeds a certain critical height:

where g is the acceleration due to gravity, I is the  second moment of area of the beam cross section, and B is the first zero of the  Bessel function of the first kind of order -1/3, which is equal to 1.86635...

Euler's Theory : The struts which fail by buckling can be analyzed by Euler's theory. In the following sections, different cases of the struts have been analyzed.

Case A: Strut with pinned ends:

Consider an axially loaded strut, shown below, and is subjected to an axial load „P „P' produces a deflectionAssume„y'that theatends are eitherdi pin jointed or rounded so that there is no moment at either end.

The strut is assumed to be initially straight, the end load being applied axially through centroid.

In this equation „M' is not a functi directly as has been done in the case of deflection of beams by integration method.

Though this equation is in „y' but we maximum or minimum.

Let us define a operator

This is a second order differential equation which has a solution of the form consisting of complimentary function and particular integral but for the time being we are interested in the complementary solution only[in this P.I = 0; since the R.H.S of Diff. equation = 0]

Where A and B are some constants.

In order to evaluate the constants A and B let us apply the boundary conditions,

From the above relationship the least value of P which will cause the strut to buckle, and it is called the " Euler Crippling Load " Pe from which w obtain.

The interpretation of the above analysis is that for all the values of the load P, other than those which make sin nL = 0; the strut will remain perfectly straight since

For the particular value of

Then we say that the strut is in a state of neutral equilibrium, and theoretically any deflection which it suffers will be maintained. sensibly constant and in practice slight increase in load at the critical value will cause the deflection to increase appreciably until the material fails by yielding.

The solution chosen of nL = p is just one particular solution; the solutions nL= 2p, 3p, 5p etc are equally valid mathematically and equally valid for modes of buckling of strut different from that of a simple bow. Theoretically therefore, there are an infinite number of values of Pe , each corresponding with a different mode of buckling.

The value selected above is so called the fundamental mode value and is the lowest critical load producing the single bow buckling condition.

If load is applied sufficiently quickly to the strut, then it is possible to pass through the fundamental mode and to achieve at least one of the other modes which are theoretically possible. In practical loading situations, however, this is rarely achieved since the high stress associated with the first critical condition generally ensures immediate collapse.