One of the major features used in all classes of GSM networks (cellular, PCS and Satellite) is the ability to support roaming users. Through the control signaling network, the MSCs interact to locate and connect to users throughout the network.

One of the major features used in all classes of GSM networks (cellular, PCS and Satellite) is the ability to support roaming users. Through the control signaling network, the MSCs interact to locate and connect to users throughout the network.

"Location Registers" are included in the MSC databases to assist in the role of determining how, and whether connections are to be made to roaming users. Each user of a GSM MS is assigned a Home Location Register (HLR) that is used to contain the user's location and subscribed services.

Difficulties facing the operators can include;

a. Remote/Rural Areas. To service remote areas, it is often economically unfeasible to provide backhaul facilities (BTS to BSC) via terrestrial lines (fiber/microwave).

b. Time to deploy. Terrestrial build-outs can take years to plan and implement.

GSM was designed with a moderate level of service security. GSM uses several cryptographic algorithms for security. The A5/1, A5/2, and A5/3 stream ciphers are used for ensuring over-the-air voice privacy.

GSM uses General Packet Radio Service (GPRS) for data transmissions like browsing the web. The most commonly deployed GPRS ciphers were publicly broken in 2011The researchers revealed flaws in the commonly used GEA/1.

The Global Positioning System (GPS) is a satellite based navigation system that can be used to locate positions anywhere on earth. Designed and operated by the U.S. Department of Defense, it consists of satellites, control and monitor stations, and receivers. GPS receivers take information transmitted from the satellites and uses triangulation to calculate a user’s exact location.

GPS is used on incidents in a variety of ways, such as:

 To navigate from one location to another; for example, you need to travel from a lookout to the fire perimeter.

 To create digitized maps; for example, you are assigned to plot the fire perimeter and hot spots.

 To determine distance between two points or how far you are from another location. 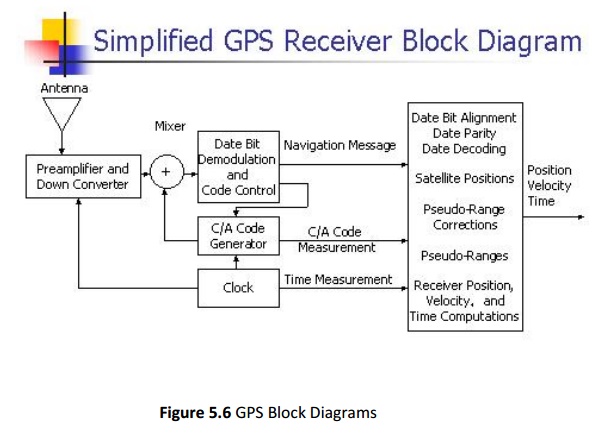 The purpose of this chapter is to give a general overview of the Global Positioning System, not to teach proficiency in the use of a GPS receiver. To become proficient with a specific GPS receiver, study the owner’s manual and practice using the receiver.

The chapter starts with a general introduction on how the global positioning system works. Then it discusses some basics on using a GPS receiver.

The space segment consists of 29 satellites circling the earth every 12 hours at 12,000 miles in altitude. This high altitude allows the signals to cover a greater area. The satellites are arranged in their orbits so a GPS receiver on earth can receive a signal from at least four satellites at any given time. Each satellite contains several atomic clocks.

The control segment tracks the satellites and then provides them with corrected orbital and time information. The control segment consists of five unmanned monitor stations and one Master Control Station. The five unmanned stations monitor GPS satellite signals and then send that information to the Master Control Station where anomalies are corrected and sent back to the GPS satellites through ground antennas.

User Segment — The GPS receivers owned by civilians and military

The user segment consists of the users and their GPS receivers. The number of simultaneous users is limitless.

How GPS Determines a Position:

The GPS receiver uses the following information to determine a position.

 When a GPS receiver is first turned on, it downloads orbit information from all the satellites called an almanac. This process, the first time, can take as long as 12 minutes; but once this information is downloaded, it is stored in the receiver’s memory for future use.

 Distance from each satellite

There are several different models and types of GPS receivers. Refer to the owner’s manual for your GPS receiver and practice using it to become proficient.

 When working on an incident with a GPS receiver it is important to:

 Always have a compass and a map.

 Know memory capacity of the GPS receiver to prevent loss of data, decrease in accuracy of data,or other problems.

 Use an external antennae whenever possible, especially under tree canopy, in canyons, or while flying or driving.

 Take notes that describe what you are saving in the receiver.