INTELSAT stands for International Telecommunications Satellite. The organization was created in 1964 and currently has over 140 member countries and more than 40 investing entities (see http://www.intelsat.com/ for more details).

INTELSAT stands for International Telecommunications Satellite. The organization was created in 1964 and currently has over 140 member countries and more than 40 investing entities (see http://www.intelsat.com/ for more details).

In July 2001 INTELSAT became a private company and in May 2002 the company began providing end-to-end solutions through a network of teleports, leased fiber, and points of presence (PoPs) around the globe.

Starting with the Early Bird satellite in 1965, a succession of satellites has been launched at intervals of a few years. Figure 1.1 illustrates the evolution of some of the INTELSAT satellites. As the figure shows, the capacity, in terms of number of voice channels, increased dramatically with each succeeding launch, as well as the design lifetime.

These satellites are in geostationary orbit, meaning that they appear to be stationary in relation to the earth. At this point it may be noted that geostationary satellites orbit in the earth’s equatorial plane and their position is specified  by their longitude.

For the ocean regions the satellites are positioned in geostationary orbit above the particular ocean, where they provide a transoceanic telecommunications route. For example, INTELSAT satellite 905 is positioned at 335.5° east longitude.

The INTELSAT VII-VII/A series was launched over a period from October 1993 to June 1996. The construction is similar to that for the V and VA/VB series, shown in Fig. in that the VII series has solar sails rather than a cylindrical body.

The VII series was planned for service in the POR and also for some of the less demanding services in the AOR. The antenna beam coverage is appropriate for that of the POR. Figure 1.3 shows the antenna beam footprints for the C-band hemispheric cover- age and zone coverage, as well as the spot beam coverage possible with the Ku-band antennas (Lilly, 1990; Sachdev et al., 1990). When used in the AOR, the VII series satellite is inverted north for south (Lilly, 1990), minor adjustments then being needed only to optimize the antenna pat- terns for this region. The lifetime of these satellites ranges from 10 to 15 years depending on the launch vehicle. 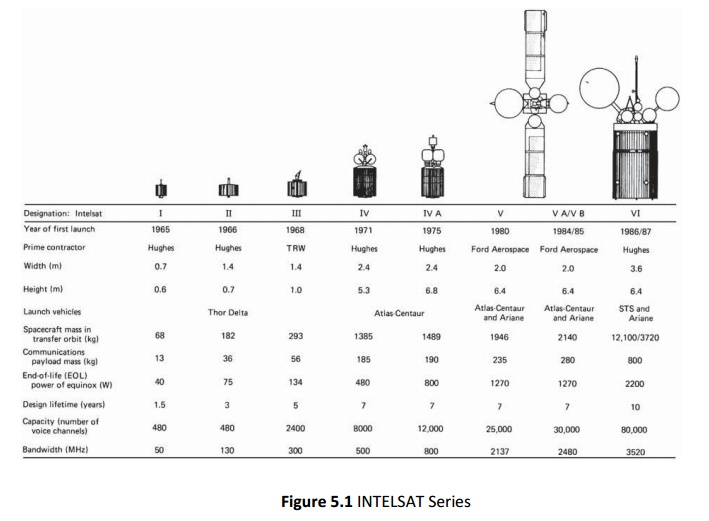 The INTELSAT VIII-VII/A series of satellites was launched over the period February 1997 to June 1998. Satellites in this series have similar capacity as the VII/A series, and the lifetime is 14 to 17 years.

It is standard practice to have a spare satellite in orbit on high- reliability routes (which can carry preemptible traffic) and to have a ground spare in case of launch failure.

Thus the cost for large international schemes can be high; for example, series IX, described later, represents a total investment of approximately $1 billion. 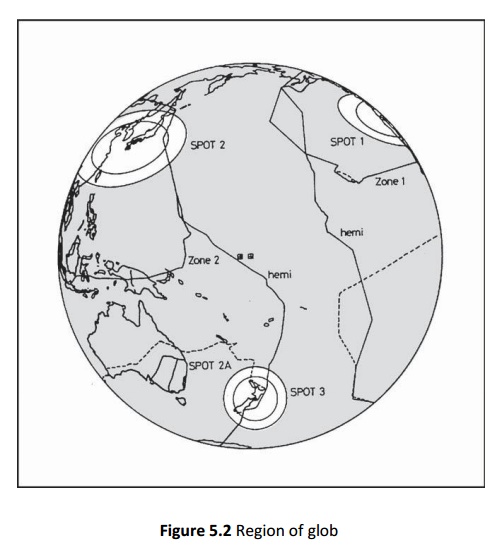