Satellites provide broadcast transmissions in the fullest sense of the word, because antenna footprints can be made to cover large areas of the earth.

Satellites provide broadcast transmissions in the fullest sense of the word, because antenna footprints can be made to cover large areas of the earth.

The idea of using satellites to provide direct transmissions into the home has been around for many years, and the services pro- vided are known generally as direct broadcast satellite (DBS) services.

1. Power Rating and Number of Transponders:

From Table 1.4 it will be seen that satellites primarily intended for DBS have a higher [EIRP] than for the other categories, being in the range 51 to 60 dBW. At a Regional Administrative Radio Council (RARC) meeting in 1983, the value established for DBS was 57 dBW (Mead,2000). Transponders are rated by the power output of their high-power amplifiers.

Typically, a satellite may carry 32 transponders. If all 32 are in use, each will operate at the lower power rating of 120 W.

The available bandwidth (uplink and downlink) is seen to be 500 MHz. A total number of 32 transponder channels, each of bandwidth 24 MHz, can be accommodated.

The bandwidth is sometimes specified as 27 MHz, but this includes a 3- MHz guardband allowance. Therefore, when calculating bit-rate capacity, the 24 MHz value is used. 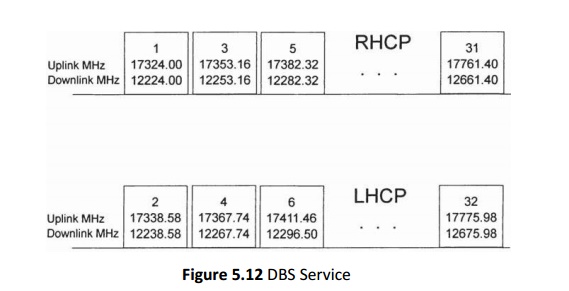 MPEG is a group within the International Standards Organization and the International Electrochemical Commission (ISO/IEC) that undertook the job of defining standards for the transmission and storage of moving pictures and sound.