The essential minerals are classified according to their recommended intake. 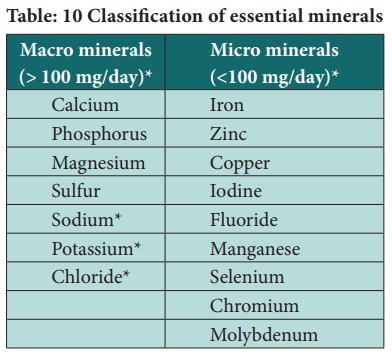 There are seven macro minerals; calcium, phosphorus, magnesium, sulfur, sodium, potassium, and chloride. As well as being needed in amounts greater than 100 milligrams per day, each of the macro minerals makes up more than 0.01% of the body’s weight.

Calcium is by far the most prevalent mineral in the body. About 98% of the 1200 grams (2.5 pounds) of calcium in the average adult body is found in the bones. Small amounts of calcium (1%) are also found in the extracellular fluid, certain intracellular structures, and cell membranes.

·  Calcium is one of the minerals needed for the growth and strength of the bones.

·  Calcium is needed for muscle contraction

·  Calcium is needed for the functioning of neuro transmitters.

A severe deficiency of calcium leads to the condition hypocalcemia resulting in rickets in children and osteomalacia in adults.

·  Phosphorus is involved in a variety of chemical reactions in the body, many of which are related to energy metabolism.

·  Mineralization of bones and teeth

·  Absorption and transport of nutrients

A phosphorus deficiency is characterized by weakness, lack of appetite, fatigue and muscle pain.

About 60% of the body’s magnesium is contained in the bones; most of the remaining magnesium is present in the muscles and other tissues, with about 1% circulating extracellular fluids.

·  The activity of hundreds of enzymes depends on magnesium

Symptoms of magnesium deficiency include weakness, confusion, lack of appetite, nausea, and lack of coordination.

Three of the macrominerals – Sodium, potassium and chloride are the body’s main electrolytes. The major function of the electrolytes is to maintain the proper distribution of water inside and outside cells. If this water balance is not maintained, cells will shrink or swell beyond their normal size. Sodium and chloride are found in the extracellular fluid; potassium is found in the intracellular Fluid (ICF).

A sodium deficiency, with fluid levels remaining constant or increasing, leads to a decrease in the extracellular sodium concentration. As a result, water migrates into cells, leading to water intoxication. Water intoxication causes loss of appetite, muscle twitching, mental apathy, coma, and seizures.

The electrolyte potassium is found mainly in the intracellular fluid

·  The main function of potassium, like sodium, is to maintain water balance.

·  Potassium is required for maintaining a normal heartbeat.

This mineral is widely distributed in foods, but fruits and vegetables are generally the most nutrient – dense sources of potassium.

As with sodium, deficiencies of potassium are usually caused by excessive losses, not low intakes. Losses occur primarily via the urine; lesser amounts are lost in sweat. Excessive potassium losses via the kidneys may result from use of potassium – depleting diuretics, which are often prescribed to treat high blood pressure. High levels of activity in hot, humid climates may lead to excessive potassium losses via perspiration. Much potassium can also be lost through long-term vomiting or prolonged diarrhea.

Symptoms of a potassium deficiency include weakness, loss of appetite, nausea, listlessness, apprehension, fatigue, irrational behavior, muscle weakness, and muscle cramping. A severe deficiency may cause an abnormal heartbeat and possibly death.

The electrolyte chloride is found primarily in the extracellular fluid.

·  Chloride is mainly a component of hydrochloric acid, which is secreted in the stomach and helps in the digestion of protein.

The main dietary sources of chloride is sodium chloride, that is, table salt. Chloride is also found in many processed food that contain added salt.

As with the other two electrolytes, chloride deficiency rarely results from poor dietary intake. Rather, chloride deficiencies are typically caused by excessive losses due to diarrhea or vomiting, heavy perspiration, trauma, or kidney disease.

About 30% of the iron in the body is stored in the spleen, liver, and bone marrow. Iron is a constituent of haemoglobin and myoglobin, which are iron-binding proteins found in red blood cells and muscle, respectively. Iron also function as a cofactor for a number of enzymes and is required for their activity.

Most zinc in the body is found in the bones and muscles. This trace mineral is necessary for optimal activity of many enzymes and for various bodily processes, including the following:

·  Metabolism of DNA, the genetic material

·  Development of sexual organs and bones

Particularly high needs for zinc occur during growth and development.

The trace mineral copper is required for proper use of iron by the body and for the activity of certain enzymes. This trace mineral also aids in the production of connective tissue, blood vessels, phospholipids, and melanin (a skin pigment).

The main dietary sources of copper are shellfish, whole grains, legumes, and nuts.

The micro mineral iodine is a necessary component of two hormones produced by the thyroid gland (thyroxine and triiodothyronine). These thyroid hormones are critical in regulating the body’s metabolic rate.

A prolonged deficiency of iodine causes enlargement of the thyroid gland, known as goiter.

Although some scientists have doubted that fluoride is an essential nutrient for humans, this trace mineral is currently considered essential. The main function of fluoride is to harden the bones and teeth.

The only good dietary sources of fluoride are fluoridated water, seafood, seaweed, and tea. Some natural water sources are also high in fluoride.

Deficiency of fluoride results in the development of dental caries.

The trace mineral manganese is required for normal brain function. This micro mineral also aids in the synthesis of collagen, urea, fatty acids, and cholesterol. Manganese is involved in bone growth and is required for the digestion of protein.

Manganese is present in many vegetable foods, and our diets supply plenty to meet the requirement, which is minimal.

For the above reason, deficiency of this trace mineral has not been observed in humans, although it can be induced in experimental animals.

The best understood role of the micro mineral selenium is its involvement in an enzyme system that helps to protect cell membranes against oxidative damage. Thus selenium has an effect similar to that of the antioxidant vitamin E.

Selenium is widely distributed in both animals and plant foods.

Deficiency resulting from low dietary intake is unlikely because of its wide distribution in animals and plant foods.

The trace mineral chromium is involved in the normal use of glucose and blood lipids and in the functioning of insulin. The active form of chromium in the body is called the Glucose Tolerance Factor (GTF).

The molybdenum of plant foods depends on the type of soil in which they are grown. (Neutral or alkaline soil).

Molybdenum deficiency has not been observed in human beings or any other species.

Seven minerals present in foods and in human bodies have been found to be essential nutrients for animals and may be essential for humans, but nutritional requirements for them have not yet been clearly defined. This group of minerals sometimes called ultra-trace minerals, includes arsenic, boron, cobalt, nickel, silicon, tin, and vanadium. 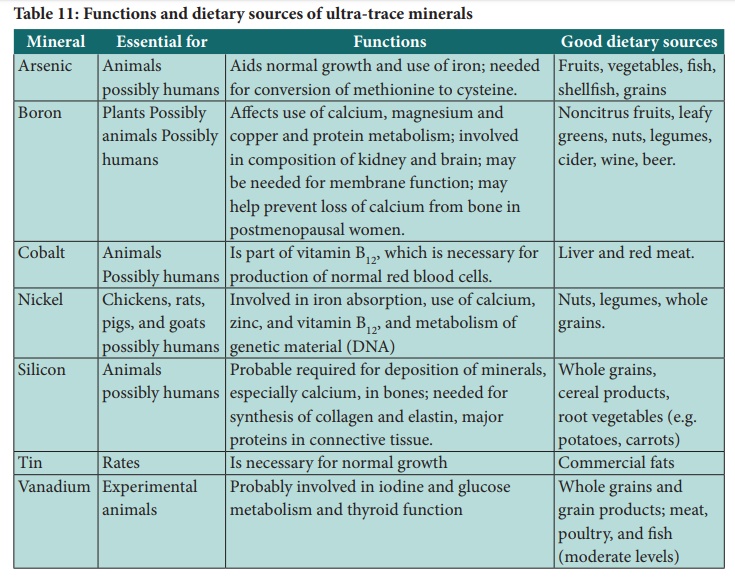