The minerals calcium, phosphorus, iron iodine, sodium and others are found in various foods in combination with organic and inorganic compounds.

The minerals calcium, phosphorus, iron iodine, sodium and others are found in various foods in combination with organic and inorganic compounds. Minerals are necessary for body building, for building bones, teeth and structural parts of soft tissues.

Distribution: Calcium makes up between 1.5 to 2 percent of body weight accounting for 1200-1600 g of the adult male body. Ninety percent of calcium is found in min-eralized tissues such as bones and teeth as calcium phosphate and calcium carbonate. The remaining 1% is found in blood, extracellular fluid (ECF), muscle and tissues.

Functions: The functions of cal-cium in humans are manifold:

ant minerals within bone are calcium phosphate and magne-sium. There is 1 kg of calcium in the adult skeleton as a complete crystalline material with phos-phate.

·        Tooth formation: The enamel and dentin of tooth contain considerable amounts of cal-cium which are dense and are present along with keratin.

Growth:  It  is  required  for growth as it forms an important part of the bones and teeth and proper functioning of every cell in the body.

Calcium ions are bound by the electrostatic forces to the pro-teins inside and outside the cells and to cell membranes. Proteins bound by calcium alter their configuration at the neuro muscular junction by the nerve impulses causing free calcium to be released. The free cal-cium bound to troponin leads to an internal trigger and so the contraction of the muscle takes place

·        Metabolic essentiality: Cal-cium acts as a activator for the enzyme renin present in gastric juice which aids the digestion of milk.

Food sources: Calcium is present in both animal and plant foods. The richest source of calcium among animal foods is milk and among the vegetable sources it is green leafy vegetables. 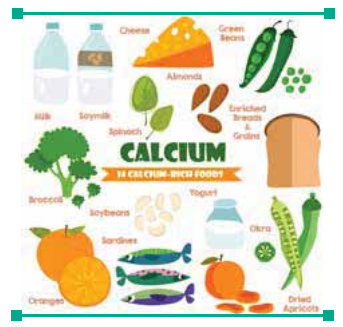 Among the green leafy vegetables, amaranth, fenu-greek and drumstick leaves are rich sources of calcium. Ragi among cereals is a rich source of calcium. Small dried fish, nuts and oil seeds like gingelly seeds, betel leaf with slaked lime are also a rich source.

·        Osteoporosis: This is a condi-tion associated with a loss in bone density and bone mass which literally means “porous bone”. With the ageing process resorption predominates bone formation resulting in osteopo-rosis.

Risk factors for osteoporosis include

·        Poor absorption and uti-lization of calcium

·        Osteopenia: It refers to the bone density that is lower than nor-mal peak density but not low enough to be classified as osteoporosis. The difference between osteopenia and osteoporosis is a matter of severity of the loss of bone density.

·        Tetany: A decrease in serum calcium levels gives rise to a condition called tetany. The symptoms of tetany are severe intermittent spasms of the mus-cles of hands and feet accompa-nied by muscular pain. Twitch-ing of facial muscles occurs.

·        Formation of bone and teeth along with calcium and magnesium.

·        Formation of phospholipids which are integral parts of cell structure.

·        Constituent of co enzymes like coenzyme I and co – carboxylase.

·        Integral constituent of DNA and RNA (nucleic acids) and nucle-oproteins.

·        Buffering of acid or alkali excesses to maintain normal pH.

·        Temporary storage and transfer of the energy derived from met-abolic fuels.

·        As part of enzymes needed for the metabolism of carbohy-drates, protein and fats. 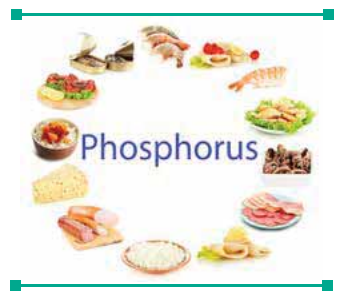 Calcium Phosphorus ratio: Nutri-tionists recommend that a Ca:P ratio between 1:1 to 2:1 should be provided by the total diet.

Deficiency: Phosphorus is so ubiquitous in various foods that near total starvation is required to produce dietary phosphorus deficiency. Inadequate phospho-rus intake is expressed as hypo-phosphatemia which manifests in the form of anemia, anorexia, muscle weakness, bone pain, rickets, osteomalacia, general weakness and increased susceptibility to infection.

Distribution: Iron content of nor-mal adult man is estimated to be about 4 grams. Iron is distributed as 60% in the circulating hemoglobin, 5% myoglobin, various heme and non heme enzymes (5%). The remaining iron is found in body storage as ferritin (20%) and hemosiderin (10%) the two major iron storage proteins

·           Heme iron: Heme iron is the iron associated to the protein globin to form hemoglobin and is found in flesh foods only

Factors decreasing the absorption of iron:

Functions: Iron has varied signif-icant functions in human body. They include:

·        Transport and storage of oxygen where each gram of hemoglobin contains about 3.34 mg of iron.

·        As myoglobin iron is required for oxygen storage in muscle.

·        It is a component of cell enzyme systems that oxidize glucose and other energy yielding nutrients.

·        To build reserves for physio-logic stress during adolescence for both boys and girls.

·        Necessary for brain develop-ment, cognitive function, the synthesis and breakdown of neurotransmitters. 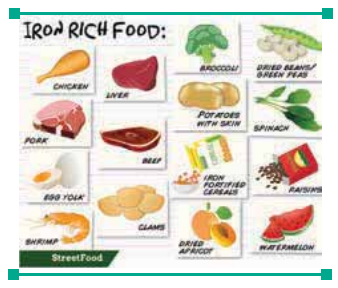 ·        Iron Deficiency anemia: When there is an insufficiency of iron for the formation of hemoglobin, the RBC’s become pale and small. The resulting anemia is called hypo-chromic and microcytic anaemia which is the most common form of anaemia throughout the world affecting women mainly in their reproductive years, infants and children. 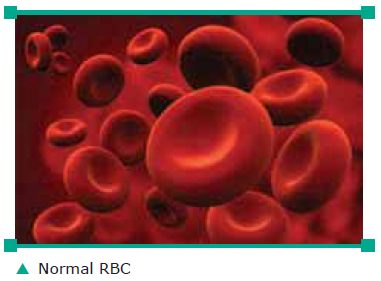 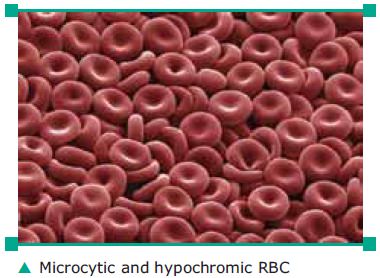 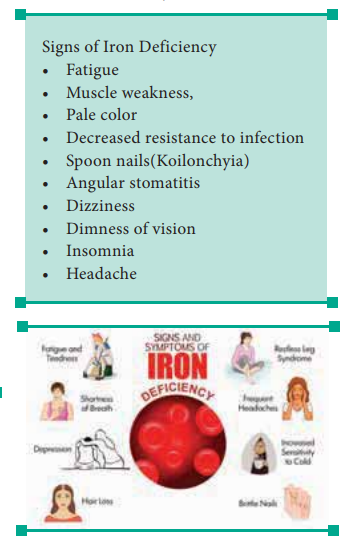 Distribution: It is one of the essen-tial micronutrients required for normal growth and development of human brain and body. Human body contains a total of 15-20 mg of iodine. Thyroid gland contains 75% of iodine and is an essential constituent of thyroxine the active principle of thyroid gland

Functions: Iodine though required in small quantities is needed to per-form the following functions

·        Synthesis of thyroxine which regulates growth, development and reproduction.

·        Enables the thyroid hormones to regulate the conversion of carotene to active vitamin A.

Marine fish and eggs are good sources of iodine. Based on the dietary pat-tern and analysis of raw foods, iodine content of various regional diets range from 170-300 μg/ day

Deficiency: It covers a collection of disorders at all stages of human growth and development.

·        Goiter: Goiter is the enlargement of thyroid gland which results when iodine is not available in sufficient quantities to produce normal quantity of thyroxine. It also arises from eating foods (goitrogens) that inhibit the synthesis of thyroxine 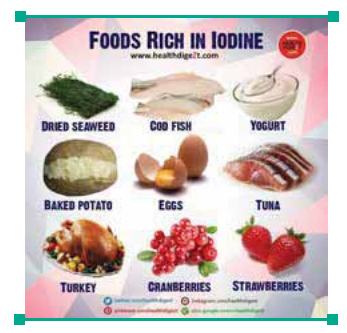 ·        Cretinism: A congenital disease resulting from a lack of iodine and thyroxin secretion characterized by physical deformity, dwarfism, men-tal retardation and often goiters.

·        Dietary improvement: Salt iodiza-tion remains the most cost effec-tive way to deliver iodine to both humans and livestock and is cred-ited with eradicating iodine defi-ciency. 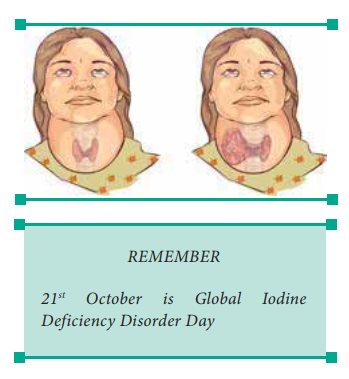 Distribution: Zinc is the most important intracellular trace element. An adult human contains 2g of zinc of which 60% is in skele-tal muscle, 30% in bone and 4-6% is present in zinc.

Functions: The functions of zinc include

·        Important constituent of enzymes like alkaline phospha-tase and carbonic anhydrase.

·        Required by protein kinases that participate in gene expression.

Food sources: Meat, seafood and liver are good sources of bioavail-able Zinc. In cereals most of the zinc is found in the outer fiber rich part of the kernel. 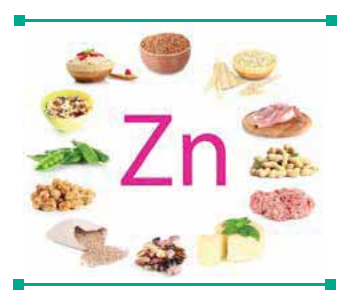