Fat soluble vitamins A, D, E and K and also water-soluble vitamins C and B group are found in foods. These are needed for growth, normal function of the body and normal body processes.

The vitamin A compounds include retinol, retinal and retinoic acid. Because it has a specific function in the retina of the eye and because it is an alcohol it was given the name ret-inol. Beta carotene is precursor of vita-min A and is found in large quantities in vegetables and fruits. 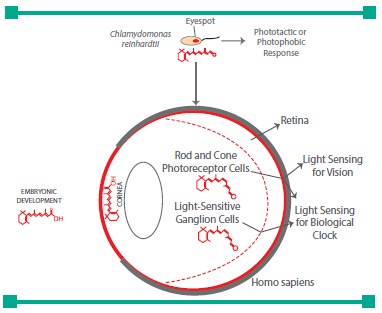 Food sources: In the animal foods vitamin A is present in the form of retinol which are identified to be liver, cream, butter and egg yolk. Liver oils of fish like cod, halibut and shark are the richest sources of vitamin A. The main contribu-tors of beta carotene are the yellow and green vegetable fruit sources of carotene- carrots, papaya, mango, sweet potatoes, spinach and broccoli. 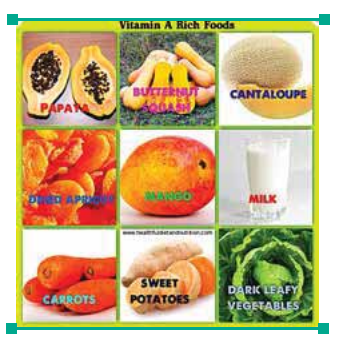 ·           Xerosis Conjunctiva:   The conjunctiva is dry, thickened, wrinkled and pigmented. This is due to the keratinization of the epithelial cells.

·           Xerosis  Cornea:  This  man ifests in the form of corneal dryness which gives the cornea a dull hazy and lusterless appearance.

·           Bitot’s spots: These are grey-ish or glistening white plaques occurring in the conjunctiva usually triangular in shape and are found in children. 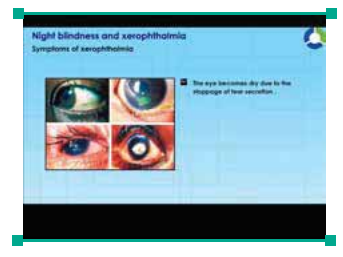 ·           Keratomalacia: When Xerosis of the conjunctiva and cornea is not treated it may develop into the condition called ker-ato malacia which is character-ized by necrosis, ulceration and bacterial invasion of cornea leading to the total destruction of the eyeball and eventually total blindness.

Prevention of vitamin A deficiency

Vitamin D is known to be a prohormone of a sterol type and the synthesis of active form of vitamin D is known as the 1,25 – dihydroxycho-lecalciferol which is accomplished by the combined action of skin, liver and kidneys.

·        Maintains balance with para-thyroid hormone to stimulate the active transport of calcium and phosphorus.

·        Acts on the bones promoting calcification.

·        Facilitates the absorption of calcium and phosphorus from the intestines.

Food sources: Vitamin D is pres-ent only in some foods of animal origin. Certain marine fishes and fresh water fishes are known to be good sources of vitamin D. The most important sources are egg yolk, butter, cheese, milk. 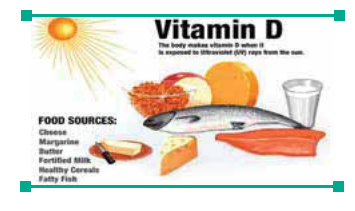 Deficiency: Vitamin D deficiency occurs in children who are not ade-quately exposed to sunlight. It is characterized by inadequate min-eralization of the bone. In children the condition is known as rickets and in adults it is called Osteoma-lacia.

Rickets: In rickets there is soft-ening of the skull bones and the head is enlarged, elongated and flattened on the vertex. Softening of the ribs, sinking of the chest, beaded junctions of the ribs with cartilages (rickety rosary), pigeon chest, knock knees and bow legs. Deformities of the long bones spine, pelvis, muscles, and feet are observed. Dentition is delayed.

Osteomalacia: It is the adult counterpart of rickets. It occurs in women of child bearing age and in those who consume poor cereal diets deficient in vitamin D and calcium. 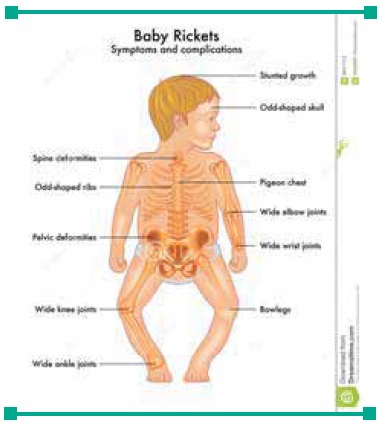 Besides it is found among those who stay indoors all day and seldom go out in the sun.

Vitamin E is the generic name for a group of vitamins, three of which –alpha tocopherol, beta tocopherol and gamma tocopherol display the greatest biologic activity. Of these three, alpha tocopherol is the most significant form of Vitamin E

·        Vitamin E a major antioxidant which reduces the incidence of heart diseases.

·        It acts along with selenium in reducing the body’s require-ment for each other. 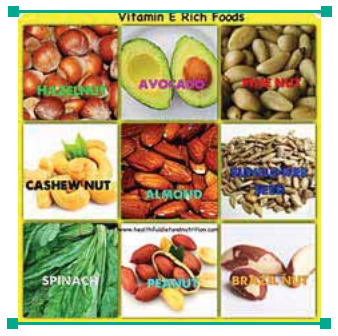 Deficiency: Vitamin E deficiency has been associated with irritabil-ity, edema and hemolytic anemia among infants. Also Muscular dys-trophy is common to all species in which there is degeneration of skel-etal and cardiac muscle with vita-min E deficiency.

Functions: The major functions of Vitamin K though not many are listed as follows:

·        Required for the synthesis of blood clotting factors by the liver.

·        Vitamin K is vital to maintain normal levels and activation of blood clotting factor like prothrombin,

The major dietary source of vita-min K is Phyllo Quinone which is present in high concentration in most vegetables like cabbage, spin-ach and cauliflower. Animal food sources include cheese, egg yolk, and liver. 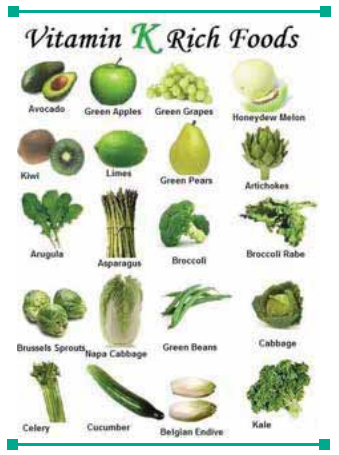 Deficiency: It manifests in the form of defective blood clotting. Low levels of prothrombin and hemor-rhage are seen in severe forms of deficiency.