The Milky Way is the galaxy in which our solar system is located. The diameter of Milky Way is over 100,000 light years.

The Milky Way is the galaxy in which our solar system is located. The diameter of Milky Way is over 100,000 light years. The Milky Way includes stars smaller than our Sun as well as many other stars that are thousands of times bigger than the Sun. It includes many other celestial bodies of gases, clouds of dust, dead stars, newly born stars, etc. It is also thought to contain at least 100 billion stars. The galaxy that is closest to our Milky Way is Andromeda. The descriptive “milky” is derived from the appearance from Earth of the galaxy – a band of light seen in the night sky formed from stars that cannot be individually distinguished by the naked eye. In Indian mythology, this patch called as Akasha Ganga. From the Earth, the Milky Way appears as a band because its disk-shaped structure is viewed from within. Galileo Galili first resolved the band of light into individual stars with his telescope in 1610. Until the early 1920s, most astronomers thought that the Milky Way contained all the stars in the Universe. Observations by Edwin Hubble showed that the Milky Way is just one of many galaxies.

Tucked inside the very center of the galaxy is a monstrous black hole, billions of times as massive as the sun. Although, black holes cannot be directly viewed, scientists can see their gravitational effects as they change and distort the paths of the material around it, most galaxies, like our milkyway, are thought to have a black hole in their heart.

A constellation is a recognizable pattern of stars in the night sky when viewed from the Earth. International Astronomical Union has classified 88 constellations to cover the entire celestial sphere. Many of the old constellations have Greek or Latin names and are often named after mythological characters. 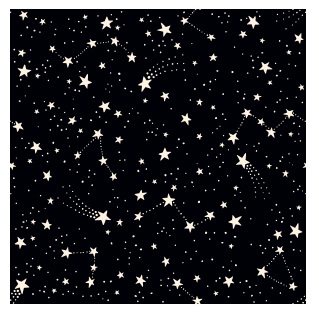 Ursa Major (Saptha Rishi Mandalam) is a large constellation and it covers a large part of the sky. The most striking feature of this constellation is a group of seven bright stars known as big dipper (seven Sages in Indian astronomy).

Ursa Minor in Lattin means ‘the little bear’ it lies in the northern sky. The Pole star – Polaris (Dhrua) lies within this constellation. The main group, ‘little dipper’, consists of seven stars and is quite similar to that found in Ursa Major.

Orion was a hunter in Greek mythology. The constellation comprises around 81 stars out of which all but 10 are too faint to be seen with naked eye.

Different constellations become visible in the sky at different times in the year. This happens due to the revolution of the Earth around the Sun.

Unlike galaxy, constellations are mere optical appearance and not real objects. In galaxy stars are bound by gravity and constitute a system. In a constellation, one star may be near and another very very far, but because they are in the same direction appear to be near to each other in the sky. 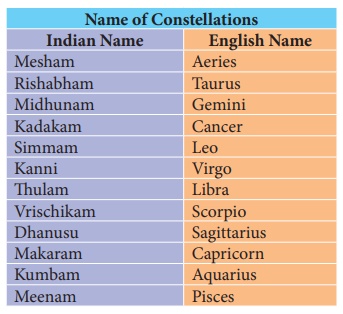