Moon going around Earth with 27 day period nicely explained its motion. However astronomers in ancient times faced problem in explaining the motion of the then known five planets- Mercury, Venus, Mars, Jupiter and Saturn.

Moon going around Earth with 27 day period nicely explained its motion. However astronomers in ancient times faced problem in explaining the motion of the then known five planets- Mercury, Venus, Mars, Jupiter and Saturn.

Moon in the background of stars moved everyday eastwards nicely. However for example, if we were observing the motion of Mars from January , it would appear to move eastward in the background stars. That is the position of mars today will be near a star which is east of the star near which it was yesterday. However on June 28 , we will see a change. From that date the Mars would appear to move west rather than its normal eastward motion. This reversal of direction of planets is called as ‘retrograde motion’. If we continue to observe, on August 28 once again the Mars would appear to reverse the direction and again on its usual eastward motion in the celestial sphere. Usually Jupiter is brighter than Mars, however, around the period of retrograde motion the Mars was much bright than other times; even brighter than Jupiter.

Other planets also exhibited number of puzzling behaviours. Venus and Mercury always appeared very close to Sun, and hence never appeared in the midnight sky. The brightness of Jupiter also varied again when it exhibited retrograde motion. For example in 2018, Jupiter reversed its direction of motion on March 9, 2018 and again resumed its normal eastward motion on July 11, 2018.

The simple geocentric model, where planets go around the Earth could not explain why the brightness of the planets changed, and why they reversed their directions. Change in brightness and retrograde motion would be impossible if we assumed that the planets were at the same distance at all times from Earth.

To explain the puzzling phenomena astronomers in early times proposed a change in the simple geocentric model. This is called as epicycle model.

Ptolemy (2nd cent) in Greece, Aryabhatta in India and others used the epicycle model to explain the motion of the celestial objects. Their models were improved by generation of astronomers like Tycho Brahe and Neelakanta Somayaji.

Although, the model explained many phenomena there were number of mismatches. The model was becoming messy.

Telescope was invented by Hans Lippershey but Galilio used it for studying the sky for the first time. The telescope showed more universe was than visible to naked eye. With his simple telescope matching toy telescopes of today, Galilio was able to see mountains on the Moon, small dim stars invisible to naked eye, sunspots on the face of Sun. He was able to demonstrate that the milky way, an hazy bright patch in the sky is nothing but thousands of stars huddled together, Jupiter had moons going around it and Saturn had mysterious appendage which we now know as rings.

One of the most startling observations he made was related to telescopic observation of Venus. This convinced him to accept the theory of the Polish Astronomer Nicolus Copernicus, that it is not Sun, planets and Stars that go around Earth, but it is Earth and other planets that go around the Sun- heliocentric theory.

Dissatisfied with the messy epicycle model Nicolus Copernicus, radically proposed that the model will become simple if we assume Sun is at the center and all planets, including Earth, go around it.

Suppose, Earth and Mars are on the two sides of the Sun, then Mars would be far and appear dim, compared to when they are on the same side. Earth orbit around Sun in 365 days, whereas Mars takes 687 days. This implies at times Earth will overtake Mars. When the Earth is approaching and overtaking Mars, the Mars would appear to exhibit retrograde motion. In short all the observed phenomena could be explained in a simple way.

However how do we know that actually Sun is at the center or not?

Galileo found that his observation of Venus gave the observational evidence to support the heliocentric theory. Galileo observed Venus in 1610-1611 with a telescope. To naked eye, Venus is just a gleaming bright spot. However, through a telescope, the shape of the planet can be seen. Galilio was startled to find like Moon Venus too exhibited phases. The shape varied from crescent to gibbous. Also, the size of the planet varied. When the planet was in gibbous phase the size was small, and when it was thin crescent the size was many folds higher. 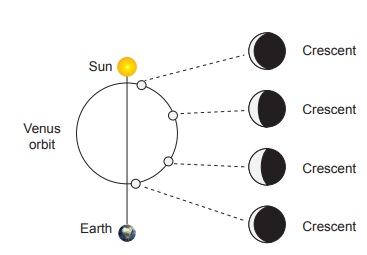 It became clear to Galilio that the geo-centric epicycle model will not help in accounting for the observed phases of the Venus. 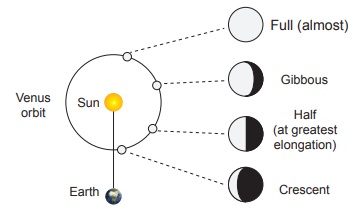 Look at the above diagram. If the Venus was going around the Sun, and its orbit is inside that of Earth, Venus would appear always near the Sun in the sky. It can never be seen in the midnight sky.  Two when it is near the Earth, it would be brighter and bigger compared to when it is on the other side of the Sun . Thirdly only if the Venus is revolving around the Sun, it can exhibit gibbous phase, and the size of the gibbous phase smaller than the crescent phase. If the Venus was revolving around the Earth, we can never see the gibbous phase of the Venus and it would be seen only if it is orbiting tthe he Sun. This clinching observational evidence proved that at the least Venus orbited around the Sun. Further evidences collected by astronomers using telescope and other advanced modern instruments gave enough evidence that all planets revolve around the Sun.

If Galileo were around today, he would surely be amazed at exploration of our solar system and beyond by ISRO, NASA, Russian space agency and others.

Now we can observe planets orbiting around other stars (called exoplanets), proving that not only planets orbit around the Sun in solar system, but all around the universe such planetary systems exist. Who knows, in some of there could be life and in rare cases intelligent life, like humans wondering and exploring universe. Imagine a future time when such life meet us; how exciting and momentous it would be!