The Indian Space Research Organisation (ISRO) is the space agency of the Government of India headquartered in the city of Bangalore.

The Indian Space Research Organisation (ISRO) is the space agency of the Government of India headquartered in the city of Bangalore. Its vision is to “harness space technology for national development while pursuing space science research and planetary exploration.”

Subrahmanyan Chandrasekhar (19 October 1910 – 21 August 1995) was an Indian American astrophysicist who spent his professional life in the United States. He was awarded the 1983 Nobel Prize for Physics with William A Fowler. His mathematical treatment of stellar evolution yielded many of the best current theoretical models of the later evolutionary stages of massive stars and black holes. The Chandrasekhar limit is named after him. Chandrasekhar worked on a wide variety of physical problems in his lifetime.

Formed in 1969, ISRO superseded the erstwhile Indian National Committee for Space Research (INCOSPAR) established in 1962 by the Scientist Vikram Sarabhai. The establishment of ISRO thus institutionalized space activities in India. It is managed by the Department of Space, which reports to the Prime Minister of India. 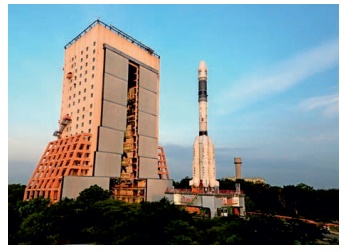 ISRO built India’s first satellite, Aryabhatta, which was launched by the Soviet Union on 19 April 1975. It was named after the Indian astronomer Aryabhata. In 1980, Rohini became the first satellite to be placed in orbit by an Indian-made launch vehicle, SLV-3. ISRO subsequently developed two other rockets: the Polar Satellite Launch Vehicle (PSLV) for launching satellites into polar orbits and the Geosynchronous Satellite Launch Vehicle (GSLV) for placing satellites into geostationary orbits. These rockets have launched numerous communication satellites and earth observation satellites. Satellite navigation systems like GAGAN and IRNSS have been deployed. In January 2014, ISRO used an indigenous cryogenic engine in a GSLV-D5 launch of the GSAT-14.

ISRO sent a lunar orbiter, Chandrayan -1, on 22 October 2008 and a Mars orbiter, Mars Orbiter Mission, on 5 November 2013, which entered Mars orbit on 24 September 2014, making India the first nation to succeed on its first attempt to Mars, and ISRO the fourth space agency in the world as well as the first space agency in Asia to reach Mars orbit. On 18 June 2016 ISRO set a record with a launch of 20 satellites in a single payload. On 15 February 2017, ISRO launched 104 satellites in a single rocket (PSLV-C37) and created a world record. ISRO launched its heaviest rocket, Geosynchronous Satellite Launch Vehicle-Mark III (GSLV-Mk III), on 5 June 2017 and placed a communications satellite GSAT-19 in orbit. With this launch, ISRO became capable of launching 4 ton heavy satellites.

ISRO launched Chandran 2 on July 22, 2019, Geosynchronous Satellite Launch Vehicle (GSLV-Mk III). It entered the Moon’s orbit on August 20, 2019 and its lander landed on the Moon on September 7.

In 1989, Galileo Galilei was memorialized with the launch of a Jupiter-bound space probe bearing his name. During its 14-year voyage, the Galileo space probe and its detachable mini-probe, visited Venus, the asteroid Gaspra, observed the impact of Comet Shoemaker-Levy 9 on Jupiter, Europa, Callisto, IO, and Amalthea.

In order to avoid the possible contamination of one of Jupiter’s moons, the Galileo space probe was purposely crashed into Jupiter at the end of its mission in September 2003.