Sky is a wonder. Sun, Moon, stars all appear to rise in the East and move towards the west, giving us an impression that all these objects are going around the Earth.

Sky is a wonder. Sun, Moon, stars all appear to rise in the East and move towards the west, giving us an impression that all these objects are going around the Earth. Just as in a moving bus the distant mountains and trees appear to move backwards, perhaps really Earth is spinning and that is why Sun, Moon and stars appear to go around the Earth. Does the Earth revolve around the Sun, or the Sun revolves around the Earth? How do you know about it?

When you look at the night sky you can see lot of twinkling objects. But a few of them differ from the others. They don’t twinkle and while the other stars hold a fixed pattern from night to night, these drift. They wander across the sky, moving against the backdrop of stars. These are called planets. Our ancestors observed this and they imagined a universe with the Earth at the center, the stars in the distant background, and Sun, Moon and the planets orbiting around us.

Two observations supported the idea that Earth was the center of the Universe. First, from anywhere on the Earth, the Sun appears to revolve around the Earth once in a day. While the Moon and the planets have their own motions, they also appear to revolve around the Earth about once per day. Even the celestial sphere studded with stars appears to rise and set in the evening, and make one complete rotation in a year. Second, the Earth seems to be unmoving from the perspective of an earthbound observer; it feels stationary. 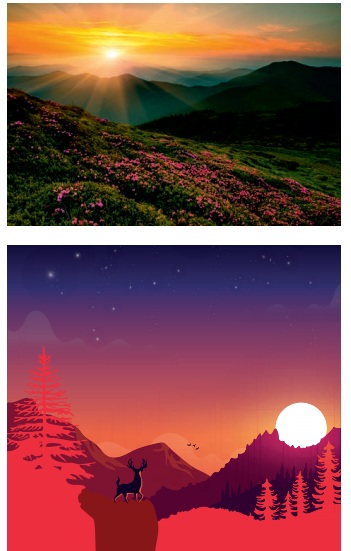 As civilization progressed the early astronomers found two types of motion of celestial objects. Let us take the case of Moon. On a daily basis Moon appears to rise in the east and set in the west. Thus, one can say that Moon is going around the Earth with a period of one day. But for a careful observer, it was clear that the Moon was also exhibiting another motion. Suppose, the Moon is appearing in the sky today near the star Asvini, tomorrow we will observe that the Moon is near the star Bharani, a star east of Asvini. And the next day it will be near the star Kartikai, east of Bharani. After 27 days, moving little by little eastwards, the Moon again stations itself near asvini. Thus, everyday Moon appears to move from east to west in one day where as it appears to go in a circle from west to east in the background of stars in about 27 days.

These two motions were puzzling. Very soon astronomers like Aryabhata said that Earth is spinning in its axis, that is the cause of apparent daily motion from East to West. Whereas the eastward motion of Moon in the celestial sphere with a period of about 27 days, was seen as the ‘actual’ motion of the celestial objects.

Thus, the geocentric model (also known as geocentrism), that is a description of the Universe with spherical and spinning Earth at the center and the Sun, Moon, stars, and planets all orbits the Earth emerged in various cultures. In Greece, this model was put forth by the Greek philosopher Plato and his disciple Aristotle in 6th century B.C. It was standardized by a Greeco Roman mathematician Ptolemy in the 2nd Century A.D. A similar model is seen in the Siddhanthic astronomy in India like Aryabhateeyam of Aryabhata.

On the day when the full moon appears, the sunand moon look at each other with their bright light. In the evening time, one sphere hides behind the mountains.”

On the full moon day, when the Sun is setting in the west, precisely at the same time, Moon rises at the East. That is both Sun and Moon are in the opposite side. Likewise when it is waning half moon, the Moon is rises when it is midnight and the waxing half moon rises during noon. From such observations and modelling ancient astronomers could explain why we have waxing and waning of moon. 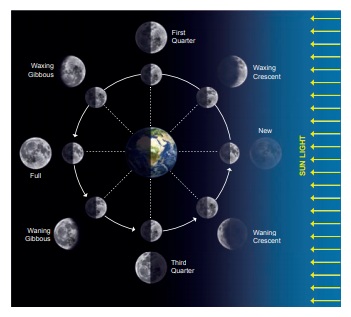 It is probably easier to understand the waxing and waning of Moon in the order of new moon & full moon and then how the first and third quarter moon (half moon) appear and then the phases in between.

Sun is the source of light. Sun light falls on the spherical earth, but only on the side facing Sun. The opposite side of Earth is without sunlight. As the Earth spins day and night follows as different parts of Earth appear before the Sun. That is at all times one half of Earth is illuminated by Sun and one half is in darkness.

Like wise at all times one half of Moon is illuminated by Sun and the opposite side is shroud in darkness.

Now look at the moon when it is behind the Earth. Now the portion of the moon illuminated by sun is totally towards Earth. The dark side is away from the Earth. This means the moon will appear to be round in the sky. This is full moon.

When the Sun, Earth and Moon are in 90 degree angle how will the moon appear to a person on the surface of the Earth? Now if you look at the portion of moon facing Earth, we will see half if it illuminated and half is dark side. Thus, the moon will appear as half moon. The half moon during the waxing period is called as first quarter and the half moon during the waning period is called as third quarter. (figure sun moon and earth are at right angles) 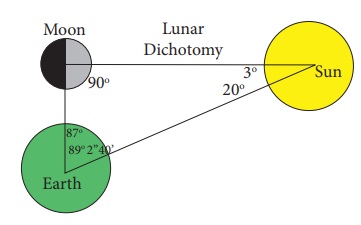 Once we understand those four key moon phases, the phases between them should be fairly easy to visualize.

The word crescent refers to the phases where the moon is less than half illuminated. The word gibbous refers to phases where the moon is more than half illuminated. Waxing  essentially  means  “growing” or expanding in illumination, and waning means “shrinking” or decreasing in illumination. Note all so that these discoveries could be made with naked eye. You do not need telescope or any modern equipment. 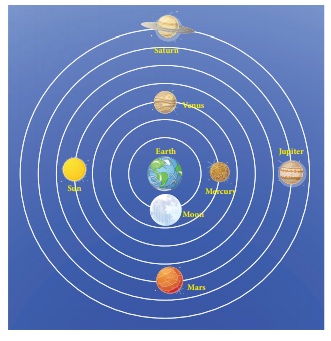