Microorganisms in the mining industry

An unexpected application for microorganisms is to be found in the mining industry.

Microorganisms in the mining industry

An unexpected application for microorganisms is to be found in the mining industry. Acidophilic bacteria including Acidithiobacillus ferrooxidans are increasingly being used to extract valuable metals, notably copper, from low-grade ores that would not be worth working by conventional technologies. You may recall that A. ferrooxidans is the organism largely responsible for the phenomenon of acid minedrainage; by carrying out the same reactions in a different context, however, it can be put to a beneficial use. Tailings, that is, mineral waste with a low metal content, are 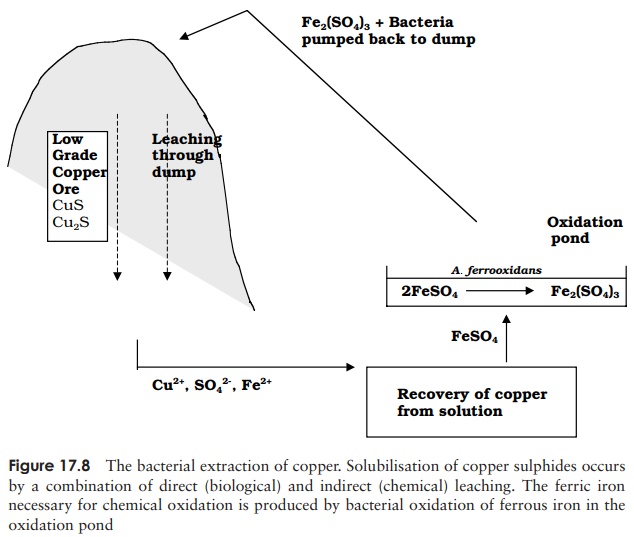 gathered in huge tips and acidified water sprinkled over them (Figure 17.8), stimulating the growth of indigenous bacteria. Bacterial oxidation results in soluble copper sulphate leaching from the tip and being collected for copper extraction. This bacterial action is known as direct bioleaching, but if you follow the process in Figure 17.8, you will see that A. ferrooxidans has not finished yet! This remarkable organism can also oxidise iron from its ferrous to ferric form; the resulting ferric sulphate is a potent oxidising agent, which, when recycled to the tip, carries out indirect (chemical) bioleaching, and so the cycle continues. A. ferrooxidans has a number of other unusual features, which enable it to survive in this hostile environment; it thrives in acidic conditions (pH < 2.0), and has an unusually high tolerance of metal ions such as copper.

Bacteria are also involved in the extraction of other metals such as uranium and gold; the methodologies dif-fer slightly, but still involve the conversion of an insoluble compound to a soluble one. It is only in the last 20 years or so that the economic possibilities of biohydrometal-lurgy have been realised, and now a significant propor-tion of the world’s copper and other metals is produced in this way. The method is inexpensive but rather slow; it may take years to extract the copper from a large tip. However as high-grade copper-bearing ores become increasingly scarce, bioleaching seems likely to play an increasingly important role.

Sulphur-oxidising bacteria also have a role to play in the coal mining industry. In-creased environmental awareness in many countries means that it is no longer acceptable to burn off the sulphur content of coal as sulphur dioxide, so an alternative must be found. One possibility is the biodesulphurisation of coal, using sulphur-oxidising bac-teria to remove the sulphur before combustion. Whilst technically feasible, economic considerations mean that this has not yet been widely adopted.