Methods of Representing Relief FeaturesEach method has its own merits and demerits in depicting the relief of the land.

The important methods of representing relief features are hachures, contours, form lines, spot heights, bench marks, trigonometrical points, hill shading, layer-colouring, and so on. Each method has its own merits and demerits in depicting the relief of the land.

Hachures are small lines drawn to represent slopes. The lines are drawn thicker to represent steeper slopes and thinner for gentle slope. The slopes above 45° is depicted completely in black colour. 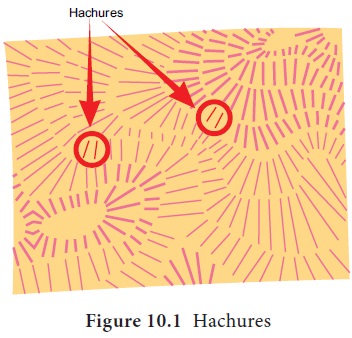 Contours are imaginary lines connecting places having same elevation above mean sea level. They are drawn in brown colour.

Form lines are like contours representing features that are not actually surveyed. They are shown by broken lines.

Spot heights are heights of places surveyed and they denote the actual height above mean sea level. They are shown in maps as dots with their respective values written beside it. 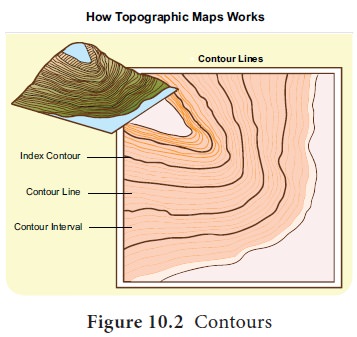 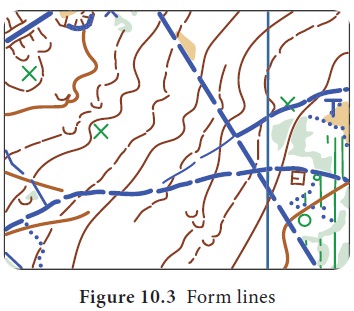 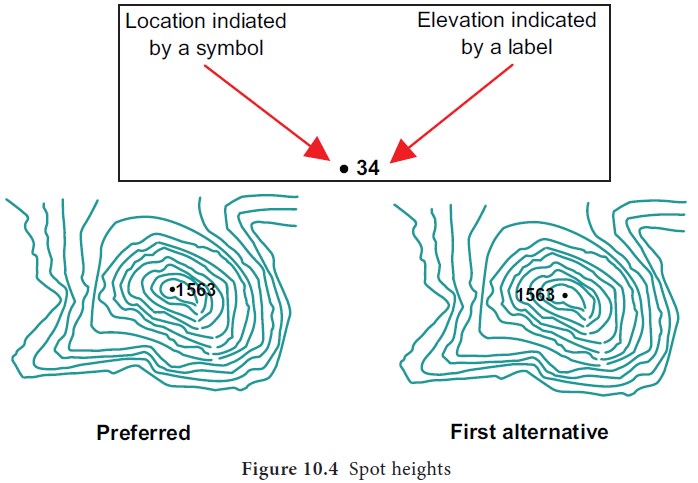 Bench marks represent the actual height of a tall structure like a tall building, pillar, bridges or any other object of permanent nature. They are marked with the letters BM with the respective height.

Trigonometrical Stations are points included in the triangulation survey and are marked in the map with a triangle with the actual height of the place. 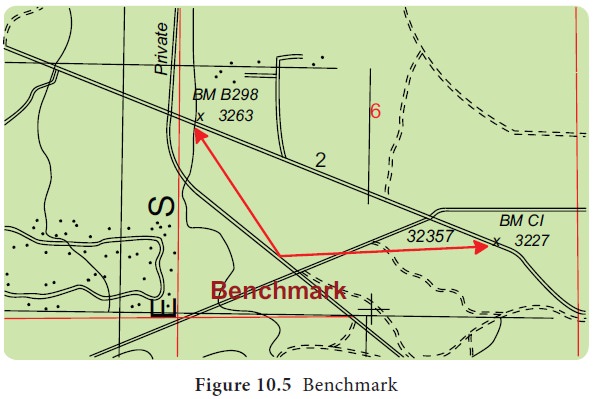 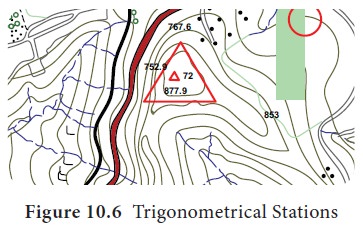 Hill Shading (levels of gray) is a method of representing relief on a map by depicting the shadows that would be cast by elevated areas if light wre shining from a certain direction. 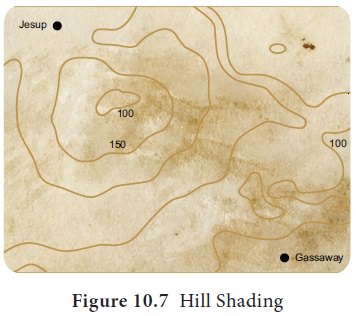 Layer Colouring is a method showing relief in layers and each layer is given a different colour. Physical maps in atlas and wall maps use this method to show relief features. Ocean depth is also shown in various shades of blue. There is an international recognition for colours used in these maps. Accordingly blue represents water bodies, green for plains, various shades of brown for highlands and white for snow covered peaks. 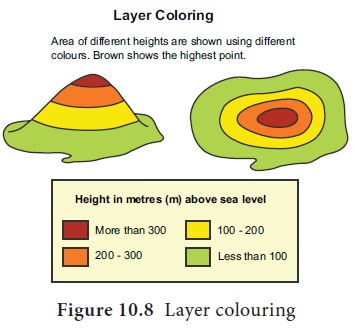 Contour is universal method to show the relief. The unit of measurement of contour is generally metres above the mean sea level. Contour has an advantage that it does not hide the other features drawn on the toposheet. Reading contours is a skill that helps us to understand the actual landscape. The skill can be obtained by understanding the salient features of contours. They are as follows: 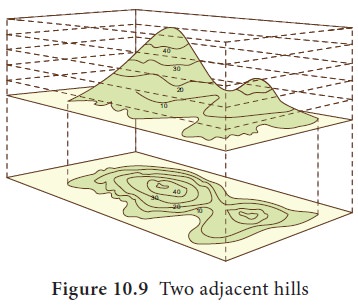 •            The value of contour is printed by breaking the contour line andalso given at the edge of the toposheet.

•            Generally contours never cut or cross each other. In case of water fall and cliffs contours almost ouch a same point or a line. In over hanging cliff the contours cut each other. 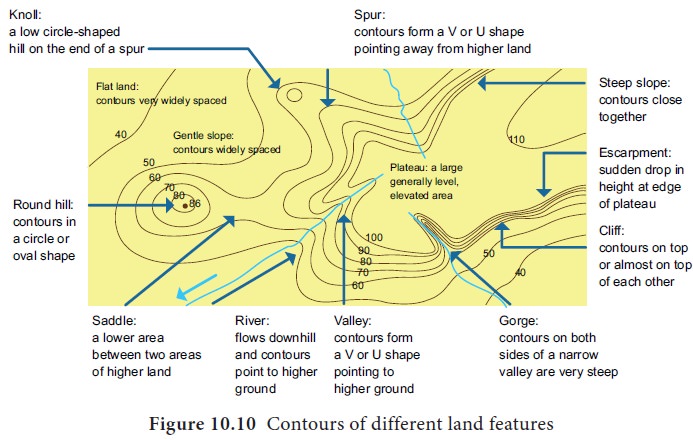 The following figure shows the way two adjacent hills are shown by contours.

Drawing cross section of the contours allows one to know the exact landform depicted in the toposheet.

Drawing cross section involves selecting a section within the portion of the contour, marking the intersections of these selected contours on suitable vertical scale and joining these points to indentify the land form. Generally closely spaced contours indicate that the slope is steep, and widely spaced contours indicate that the slope is gentle. The following pictures show contours and cross sections of a hill and a depression.

Steps to be followed to draw contours and the cross section:

c.         Below the contour draw required number of horizontal lines of equal distance and interval (2mm) to represent all the contour values given in the diagram

d.        Write the value of all the contours in such a way that the lowest value of the contour forms the base line and the values increase according to the contour interval given in the diagram. 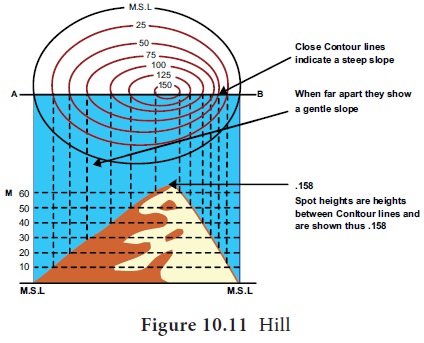 e.         Draw vertical lines from each intersection point on the line AB with the contours to the horizontal line representing its value.

g.        Shade the feature in black to complete the cross section.

•            A plateau is an elevated land represented byinnermostcontourroughlyrectangular in shape and closer outer contours. The height may generally vary from 300m to 600 metres. If a plateau is enclosed by mountains, it is called intermontane plateau and when it is formed in the foot hills it is called piedmont plateau.

•            A ridge is an elongated and steep sloped high mountain with two or more peaks shown by elliptical contour lines. A narrow low depression between two peaks is called Col. Saddle is similar to a col but higher, broader and gently sloping from peaks of a ridge. 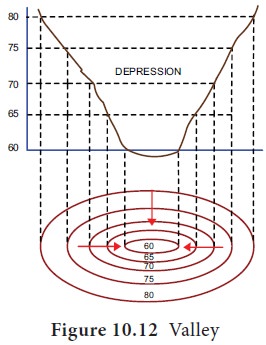 •            A valley is a long depression with steep slope formed by the vertical erosion of the river within the stretch of upland. The contours bend sharply across the river in a ‘V’ shape with the apex pointing towards higher elevations.

•            Spurs are projection of land from higher to lower ground. Contours bend smoothly with the apex of the ‘V’ pointing towards lower ground.

•            A waterfall occurs when there is a sudden difference in height of the river valley.A waterfall is a place where water flows over a vertical drop or a series of steep drops in the course of a stream or river. 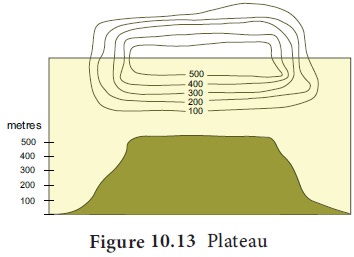 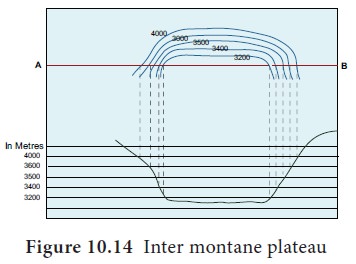 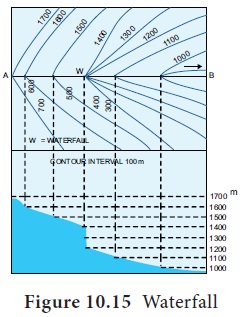 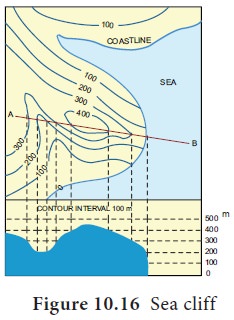 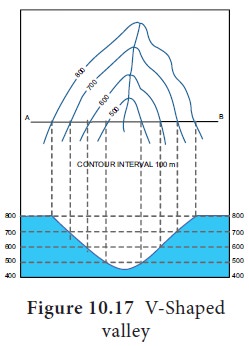 It is represented by contours meeting at a same point on the hill slope. The difference between the value of the highest and the lowest contour touching the same point gives the height of the waterfall.

•            Gorge is a very steep valley at higher elevations formed by river erosion. It can be identified by closely converging contours in the river course.

•            A volcano is represented by closed contours with the innermost contours having lesser values than the surrounding, denoting the crater depression. 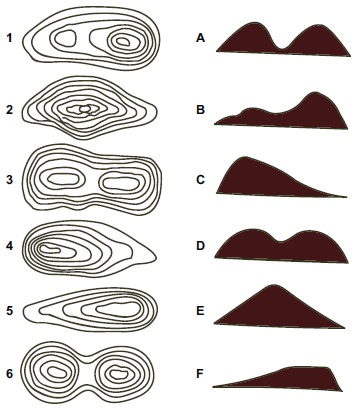