In most of the cases, the data points do not fall on a straight line (not highly correlated), thus leading to a possibility of depicting the relationship between the two variables using several different lines. Selection of each line may lead to a situation where the line will be closer to some points and farther from other points. We cannot decide which line can provide best fit to the data.

To obtain the estimates of the coefficients ‘a’ and ‘b’, the least squares method minimizes the sum of squares of residuals. The residual for the ith data point ei is defined as the difference between the observed value of the response variable, yi, and the estimate of the response variable, ŷi, and is identified as the error associated with the data. i.e., ei = yi–ŷi , i =1 ,2, ..., n.

The method of least squares helps us to find the values of unknowns ‘a’ and ‘b’ in such a way that the following two conditions are satisfied:

Sum of the residuals is zero. That is

The method of least squares can be applied to determine the estimates of ‘a’ and ‘b’ in the simple linear regression equation using the given data (x1,y1), (x2,y2), ..., (xn,yn) by minimizing 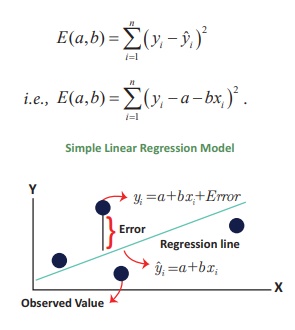 Here, yˆi = a + bx i is the expected (estimated) value of the response variable for given xi.

It is obvious that if the expected value (y^ i) is close to the observed value (yi), the residual will be small. Since the magnitude of the residual is determined by the values of ‘a’ and ‘b’, estimates of these coefficients are obtained by minimizing the sum of the squared residuals, E(a,b).

Differentiation of E(a,b) with respect to ‘a’ and ‘b’ and equating them to zero constitute a set of two equations as described below: 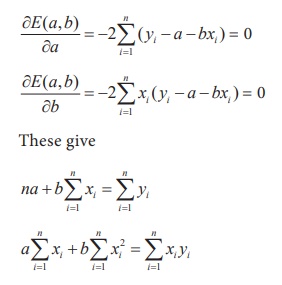 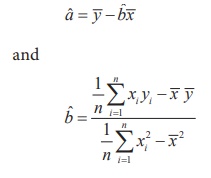 Further, it may be noted that for notational convenience the denominator of bˆ above is mentioned as variance of nX. But, the definition of sample variance remains valid as defined in Chapter I, that is,

From Chapter 4, the above estimate can be expressed using, rXY , Pearson’s coefficient of the simple correlation between X and Y, as

Important Considerations in the Use of Regression Equation:

1. Regression equation exhibits only the relationship between the respective two variables. Cause and effect study shall not be carried out using regression analysis.

Construct the simple linear regression equation of Y on X if

The values of ‘a’ and ‘b’ have to be estimated from the sample data solving the following normal equations.

Substituting the given sample information in (2) and (3), the above equations can be expressed as 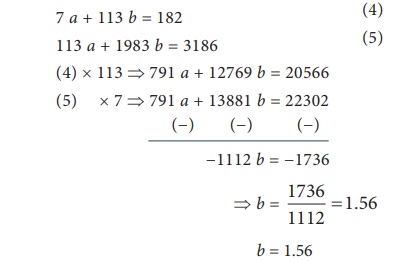 Substituting this in (4) it follows that,

Number of man-hours and the corresponding productivity (in units) are furnished below. Fit a simple linear regression equation ˆY = a + bx applying the method of least squares.

Here, the estimates of a and b can be calculated using their least squares estimates 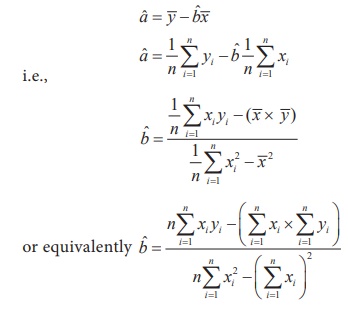 From the given data, the following calculations are made with n=9

Substituting the column totals in the respective places in the of the estimates aˆ and bˆ , their values can be calculated as follows: 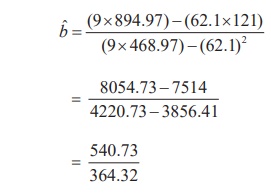 Now aˆ can be calculated using bˆ as

Therefore, the required simple linear regression equation fitted to the given data is

It should be noted that the value of Y can be estimated using the above fitted equation for the values of x in its range i.e., 3.6 to 10.7.

In the estimated simple linear regression equation of Y on X

we can substitute the estimate aˆ =

. Then, the regression equation will become as

). The above representation of straight line is popularly known in the field of Coordinate Geometry as ‘Slope-Point form’. The above form can be applied in fitting the regression equation for given regression coefficient bˆ and the averages 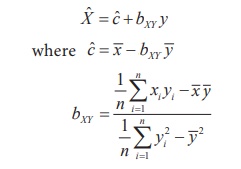 The slope-point form of this equation is

Also, the relationship between the Karl Pearson’s coefficient of correlation and the regression coefficient are