1.        What are the differences between minerals and ores? 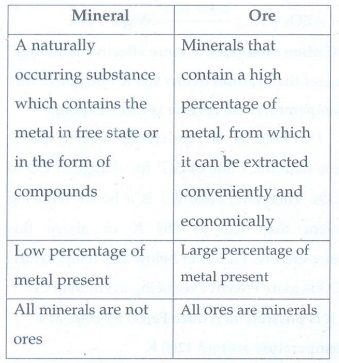 • All minerals are not ores

• Minerals that contain a high percentage of metal, from which it can be extracted conveniently and economically

• All ores are minerals

2.     What are the various steps involved in extraction of pure metals from their ores?

(i) Concentration of the ore

3.     What is the role of Limestone in the extraction of Iron from its oxide Fe2O3 ?

The silica gangue present in the iron ore is acidic in nature. Silica removed by using basic flux, limestone (CaO). The limestone combines with silica gangue to form calcium silicate (slag). The slag was removed.

4.     Which type of ores can be concentrated by froth floatation method? Give two examples for such ores.

Sulphide ores can be concentrated by froth flotation method.

5.     Out of coke and CO, which is better reducing agent for the reduction of ZnO? Why?

6.     Describe a method for refining nickel.

The impure nickel is heated in a stream of carbon monoxide at around 350 K. The nickel reacts with the CO to form a highly volatile nickel tetracarbonyl. The solid impurities are left behind.

The nickel tetracarbonyl heated around 460 K, the complex decomposes to give pure nickel.

7.     Explain zone refining process with an example using the Ellingham diagram given below.

i) This method is based on the principle of fractional crystallisation. When an impure metal is melted and allowed to solidify, the impurities are more soluble in the melt than in the solid state metal.

ii) The impure metal is taken in the form of a rod. One end of the rod is heated using a mobile induction heater which results in melting of the metal on that portion of the rod.

iii) When the heater is slowly moved to the other end, the pure metal crystallises while the impurities will move on to the adjacent molten zone formed. As the heater moves further away, the impurities also moves along with it.

iv) The process is repeated several times to achieve the pure element.

v) This process is carried out in an inert gas atmosphere to prevent the oxidation of metals.

Elements such as germanium (Ge), silicon (Si) and galium (Ga) that are used as semiconductor are refined using this process.

In the Ellingham diagram, above 1623 K, the ∆G° value for Al2O3 is more negative than that of MgO. Thus ∆G° of the reaction is negative.

(B) Carbon monoxide is more effective reducing agent than carbon below 983K but, above this temperature, the reverse is true –Explain.

Yes, it is possible to reduce Fe2O3 by coke at a temperature around 1200K . Ellingham diagram for the formation of FeO and CO intersects around 1000 K. Below this temperature, the carbon line lies above the iron line which indicates that FeO is more stable and the reduction is thermodynamically not feasible. Around 1200 K carbon line lies below the iron line and hence, coke can be used as reducing agent.

• It is used to produce die-castings in the automobile, electrical and hardware industries.

• Zinc oxide is used in the manufacture of many products such as paints, rubber, cosmetics, pharmaceuticals, plastics, inks, batteries, textiles and electrical equipment.

• Brass an alloy of zinc is used in water valves and communication equipment as it is highly resistant to corrosion.

10. Explain the electrometallurgy of aluminium.

Anode: The carbon blocks immersed in the electrolyte

A 20% solution of alumina, obtained from the bauxite ore is mixed with molten cyrolite and is taken in the electrolysis chamber.

About 10% calcium chloride is also added to the solution, which lowers the melting point of the mixture.

The fused mixture is maintained at a temperature of above 1270 K.

The pure aluminium is formed at the cathode and settles at the bottom. The net electrolysis reaction is

The ores are associated with nonmetallic impurities, rocky materials and siliceous matter which are collectively known as gangue.

The silica gangue present in the iron ore

When gangue present in the roasted or calcined ore combined with the flux forms a fusible material called slag.

Silica gangue in the iron ore removed by using limestone (CaO). The slag was removed.

12. Give the basic requirement for vapour phase refining.

• The metal is treated with a suitable reagent it should form a volatile compound with the metal.

• The volatile compound is easily decomposed to give the pure metal.

13. Describe the role of the following in the process mentioned.

(i) Silica in the extraction of copper.

(ii) Cryolite in the extraction of aluminium.

(iii) Iodine in the refining of Zirconium.

(i) Silica in the extraction of copper.

Silica is used as flux material in the extraction of copper.

The concentrated ore is heated with an acidic flux silica. The ferrous oxide formed due to melting is basic in nature and it combines with silica to form ferrous silicate (slag).

(ii) Cryolite in the extraction of aluminium.

(a) The melting point of alumina is very high.

(b) Cryolite increase the electrical conductivity of alumina.

(c) The function of cryolite is to lower the fusion temperature.

(iii) Iodine in the refining of Zirconium.

Sodium cyanide (NaCN) is added to depress the floatation property.

14. Explain the principle of electrolytic refining with an example.

The crude metal is refined by electrolysis.

The metal dissolves from the anode, pass into the solution while the same amount of metal ions from the solution will be deposited at the cathode. The insoluble impurities in the anode settles at the bottom of the anode as anode mud.

During electrolysis, at the anode the silver atoms lose electrons and enter the solution. The positively charged silver cations migrate towards the cathode and get discharged by gaining electrons and deposited on the cathode. The impurities settle down at the bottom of anode as anode mud.

15. The selection of reducing agent depends on the thermodynamic factor: Explain with an example.

The extraction of metals from their oxides can be carried out by using different reducing agents.

The above reduction may be carried out with carbon. The reducing agent carbon may be oxidised to either CO or CO2.

If carbon monoxide is used as a reducing agent, it is oxidised to CO2 as follows

16. Give the limitations of Ellingham diagram.

ii) The interpretation of ∆G is based on the assumption that the reactants are in equilibrium with the product which is not always true.

17.   Write a short note on electrochemical principles of metallurgy.

The reduction of oxides of active metals by carbon is thermodynamically not feasible. Such metals are extracted by using electrochemical methods. The metal salts are taken in a fused form or in solution form. The metal ion present can be reduced by treating it with some suitable reducing agent or by electrolysis.

Where n is number of electrons involved in the reduction process

F is the Faraday

E° is the electrode potential of the redox couple.

1. Write the equation for the extraction of silver by leaching with sodium cyanide and show that the leaching process is a redox reaction.

In the metallurgy of silver metal is leached with a dilute solution of NaCN in the presence of air (O2).

In this reaction, Ag → Ag+ oxidation number of Ag increases from 0 to +1, hence oxidation

Hence Leaching of silver is a redox reaction.

2. Magnesite (Magnesium carbonate) is calcined to obtain magnesia, which is used to make refractory bricks. Write the decomposition reaction.

3. Using Ellingham diagram indicate the lowest temperature at which ZnO can be reduced to Zinc metal by carbon. Write the overall reduction reaction at this temperature.

Ellingham diagram for the formation of ZnO and CO intersects around 1233 K below this temperature, Carbon line lies above Zinc line. Hence ZnO is more stable than CO so the reduction is thermodynamically not feasible at this temperature range.

However above 1233 K carbon line lies below the zinc line, hence carbon can be used as a reducing agent above 1233 K.

Reversing (1) and adding with equation (2)

Sodium metal is prepared by Down's process. This involves the electrolysis of fused NaCl and CaCl2 at 873K. During electrolysis sodium is discharged at the cathode and Cl2 is obtained at the anode.

Hence solution is basic in nature.