The extraction of crude metals from the concentrated ores is carried out in two steps namely, (i) conversion of the ore into oxides of the metal of interest and (ii) reduction of the metal oxides to elemental metals.

The extraction of crude metals from the concentrated ores is carried out in two steps namely, (i) conversion of the ore into oxides of the metal of interest and (ii) reduction of the metal oxides to elemental metals. In the concentrated ore, the metal exists in positive oxidation state and hence it is to be reduced to its elemental state. We can infer from the principles of thermodynamics, that the reduction of oxide is easier when compared to reduction of other compounds of metal and hence, before reduction, the ore is first converted into the oxide of metal of interest.

Let us discuss some of the common methods used to convert the concentrated ore into the oxides of the metal of interest.

1. Conversion of ores into oxides

Roasting is the method, usually applied for the conversion of sulphide ores into their oxides. In this method, the concentrated ore is oxidised by heating it with excess of oxygen in a suitable furnace below the melting point of the metal.

Roasting also removes impurities such as arsenic, sulphur, phosphorous by converting them into their volatile oxides. 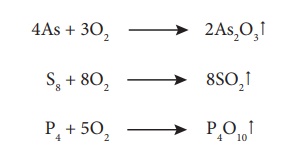 Calcination is the process in which the concentrated ore is strongly heated in the absence of air. During this process, the water of crystallisation present in the hydrated oxide escapes as moisture. Any organic matter (if present) also get expelled leaving behind a porous ore. This method can also be carried out with a limited supply of air.

During calcination of carbonate ore, carbon dioxide is expelled 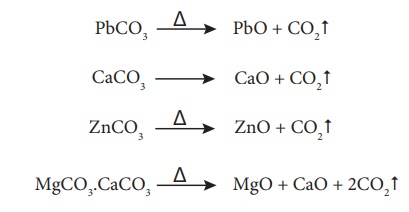 During calcination of hydrated ore, the water of hydration is expelled as vapour

In this method, a flux (a chemical substance that forms an easily fusible slag with gangue) and a reducing agent such as carbon, carbon monoxide (or) aluminium is added to the concentrated ore and the mixture is melted by heating at an elevated temperature (above the melting point of the metal) in a smelting furnace. For example the oxide of iron can be reduced by carbon monoxide as follows.

In this extraction, a basic flux, limestone (CaO) is used. Since the silica gangue present in the ore is acidic in nature, the limestone combines with it to form calcium silicate (slag).

In the extraction of copper from copper pyrites, the concentrated ore is heated in a reverberatory furnace after mixing with silica, an acidic flux. The ferrous oxide formed due to melting is basic in nature and it combines with silica to form ferrous silicate (slag). The remaining metal sulphides Cu2S and FeS are mutually soluble and form a copper matte.

The matte is separated from the slag and fed to the converting furnace. During conversion, the FeS present in the matte is first oxidised to FeO. This is removed by slag formation with silica. The remaining copper sulphide is further oxidised to its oxide which is subsequently converted to metallic copper as shown below.

The metallic copper is solidified and it has blistered appearance due to evolution of SO2 gas formed in this process. This copper is called blistered copper.

In this method the oxide ore of the metal is mixed with coal (coke) and heated strongly in a furnace (usually in a blast furnace). This process can be applied to the metals which do not form carbides with carbon at the reduction temperature.

This method can be applied to the oxides of the metals (Fe, Pb, Cu) having less electro-positive character than hydrogen.

Metallic oxides such as Cr2O3 can be reduced by an aluminothermite process. In this process, the metal oxide is mixed with aluminium powder and placed in a fire clay crucible. To initiate the reduction process, an ignition mixture (usually magneisium and barium peroxide) is used.

During the above reaction a large amount of heat is evolved (temperature up to 2400°C, is generated and the reaction enthalpy is : 852 kJ mol-1) which facilitates the reduction of Cr2O3 by aluminium power.

Active metals such as sodium, potassium and calcium can also be used to reduce the metal oxide

Simple roasting of some of the ores give the crude metal. In such cases, the use of reducing agents is not necessary. For example, mercury is obtained by roasting of its ore cinnabar (HgS)