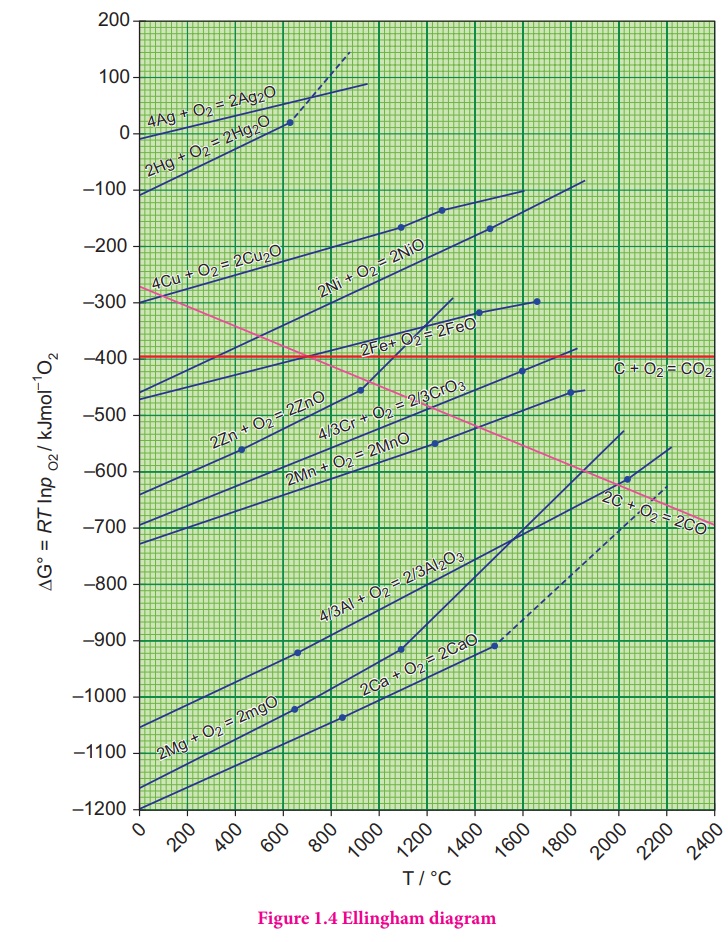 The change in Gibbs free energy (ΔG) for a reaction is given by the expression.

where, ΔH is the enthalpy change , T the temperature in kelvin and ΔS the entropy change. For an equilibrium process, ΔG⁰ can be calculated using the equilibrium constant by the following expression

Harold Ellingham used the above relationship to calculate the ΔG⁰ values at various temperatures for the reduction of metal oxides by treating the reduction as an equilibrium process.

He has drawn a plot by considering the temperature in the x-axis and the standard free energy change for the formation of metal oxide in y-axis. The resultant plot is a straight line with ΔS as slope and ΔH as y-intercept. The graphical representation of variation of the standard Gibbs free energy of reaction for the formation of various metal oxides with temperature is called Ellingham diagram

Observations from the Ellingham diagram.

1. For most of the metal oxide formation, the slope is positive. It can be explained as follows. Oxygen gas is consumed during the formation of metal oxides which results in the decrease in randomness. Hence, ΔS becomes negative and it makes the term, TΔS positive in the straight line equation.

2. The graph for the formation of carbon monoxide is a straight line with negative slope. In this case ΔS is positive as 2 moles of CO gas is formed by the consumption of one mole of oxygen gas. It indicates that CO is more stable at higher temperature.

4. There is a sudden change in the slope at a particular temperature for some metal oxides like MgO, HgO. This is due to the phase transition (melting or evaporation).

Applications of the Ellingham diagram:

1. Ellingham diagram for the formation of Ag2O and HgO is at upper part of the diagram and their decomposition temperatures are 600 and 700 K respectively. It indicates that these oxides are unstable at moderate temperatures and will decompose on heating even in the absence of a reducing agent.

2. Ellingham diagram is used to predict thermodynamic feasibility of reduction of oxides of one metal by another metal. Any metal can reduce the oxides of other metals that are located above it in the diagram. For example, in the Ellignham diagram, for the formation of chromium oxide lies above that of the aluminium, meaning that Al2O3 is more stable than Cr2O3. Hence aluminium can be used as a reducing agent for the reduction of chromic oxide. However, it cannot be used to reduce the oxides of magnesium and calcium which occupy lower position than aluminium oxide.

From the Ellingham Diagram at 1500 K,

2. The interpretation of ΔG is based on the assumption that the reactants are in equilibrium with the products which is not always true.