1. Bauxite has the composition

2. Roasting of sulphide ore gives the gas (A).(A) is a colourless gas. Aqueous solution of (A) is acidic. The gas (A) is

3. Which one of the following reaction represents calcinations?

4. The metal oxide which cannot be reduced to metal by carbon is

5. Which of the metal is extracted by Hall-Heroult process?

6. Which of the following statements, about the advantage of roasting of sulphide ore before reduction is not true?

a) ΔGf0 of sulphide is greater than those for CS2 and H2S .

c) Roasting of the sulphide to its oxide is thermodynamically feasible.

7. Match items in column - I with the items of column – II and assign the correct code. 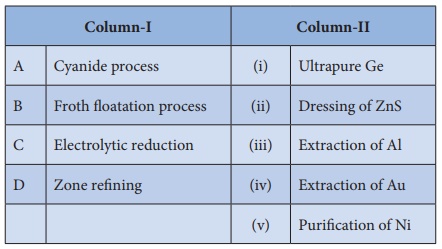 8. Wolframite ore is separated from tinstone by the process of

9. Which one of the following is not feasible

10. Electrochemical process is used to extract

11. Flux is a substance which is used to convert

a) Mineral into silicate

12. Which one of the following ores is best concentrated by froth – floatation method?

13. In the extraction of aluminium from alumina by electrolysis, cryolite is added to

a) Lower the melting point of alumina

b) Remove impurities from alumina

d) Increase the rate of reduction

14. Zinc is obtained from ZnO by

15. Cupellation is a process used for the refining of

16. Extraction of gold and silver involves leaching with cyanide ion. silver is later recovered by

17. Considering Ellingham diagram, which of the following metals can be used to reduce alumina?

18. The following set of reactions are used in refining Zirconium

This method is known as

19. Which of the following is used for concentrating ore in metallurgy?

20. The incorrect statement among the following is

a) Nickel is refined by Mond’s process

b) Titanium is refined by Van Arkel’s process

d) In the metallurgy of gold, the metal is leached with dilute sodium chloride solution

21. In the electrolytic refining of copper, which one of the following is used as anode?

22. Which of the following plot gives Ellingham diagram

23. In the Ellingham diagram, for the formation of carbon monoxide 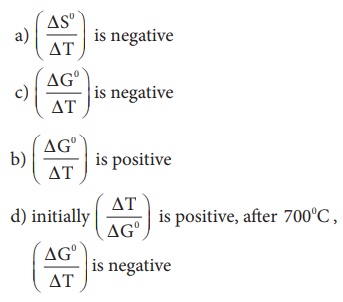 24. Which of the following reduction is not thermodynamically feasible?

d) none of these

25. Which of the following is not true with respect to Ellingham diagram?

a) Free energy changes follow a straight line. Deviation occurs when there is a phase change.

b) The graph for the formation of CO2 is a straight line almost parallel to free energy axis.

c) Negative slope of CO shows that it becomes more stable with increase in temperature.

d) Positive slope of metal oxides shows that their stabilities decrease with increase in temperature.