The following data provide the runs scored by two batsmen in the last 10 matches.

The mean of both datas are same (40), but they differ significantly. 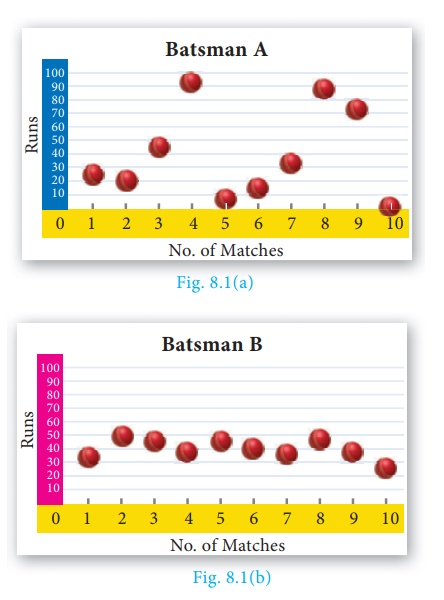 From the above diagrams, we see that runs of batsman B are grouped around the mean. But the runs of batsman A are scattered from 0 to 100, though they both have same mean.

Thus, some additional statistical information may be required to determine how the values are spread in data. For this, we shall discuss Measures of Dispersion.

Dispersion is a measure which gives an idea about the scatteredness of the values.

Measures of Variation (or) Dispersion of a data provide an idea of how observations spread out (or) scattered throughout the data.

Different Measures of Dispersion are

The difference between the largest value and the smallest value is called Range.

Example 8.2 Find the range of the following distribution.

2. Deviations from the mean

For a given data with n observations x 1 , x2,¼xn , the deviations from the mean

3. Squares of deviations from the mean

The squares of deviations from the mean

) are small, then the squares of the deviations will be very small.

The mean of the squares of the deviations from the mean is called Variance.

It is denoted by σ2 (read as sigma square).

Variance = Mean of squares of deviations

Standard deviation gives a clear idea about how far the values are spreading or deviating from the mean. 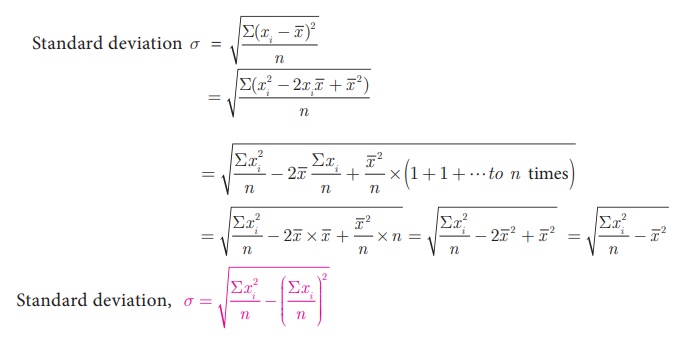 ·        While computing standard deviation, arranging data in ascending order is not mandatory. 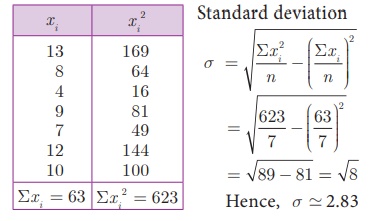 Another convenient way of finding standard deviation is to use the following formula.

are the deviations, then 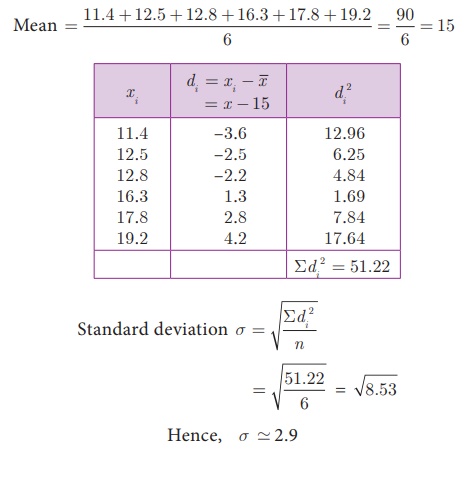 When the mean value is not an integer (since calculations are very tedious in decimal form) then it is better to use the assumed mean method to find the standard deviation. 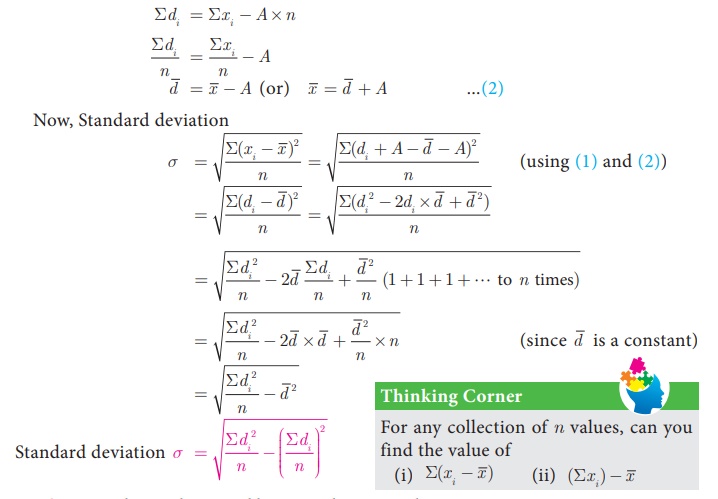 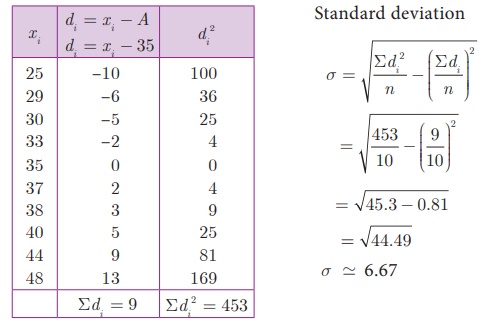 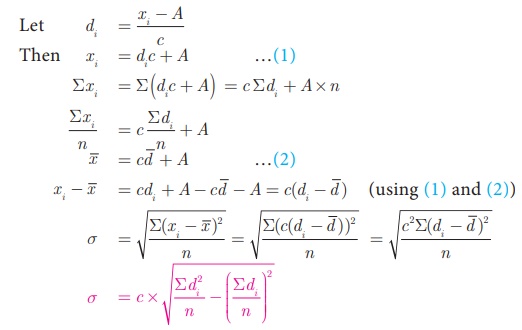 Solution We note that all the observations are divisible by 5. Hence we can use the step deviation method. Let the Assumed mean A = 20, n = 8. 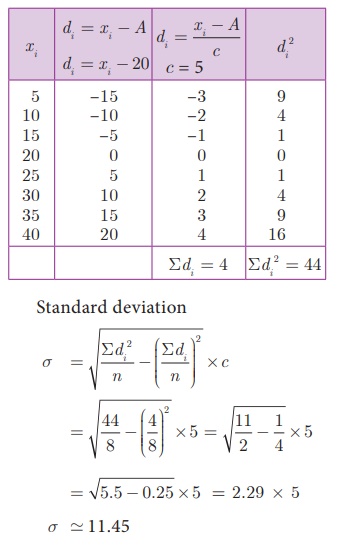 From the above, we see that the standard deviation will not change when we add some fixed constant to all the values.

From the above, we see that when we multiply each data by 4 the standard deviation also get multiplied by 4.

Example 8.10 Find the mean and variance of the first n natural numbers. 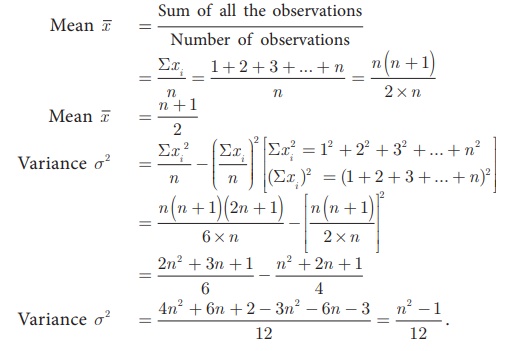 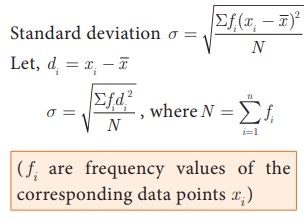 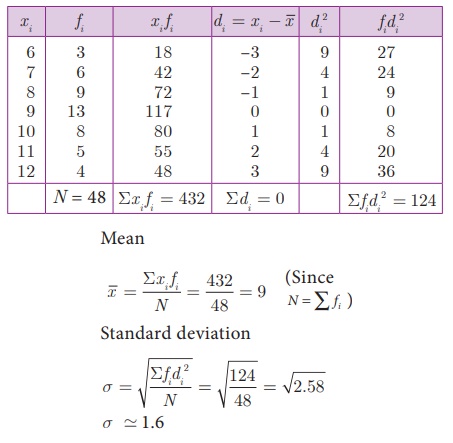 The marks scored by the students in a slip test are given below.

Find the standard deviation of their marks.

where   xi = Middle value of the i th class.

fi = Frequency of the i th class.

To make the calculation simple, we provide the following formula. Let A be the assumed mean, xi be the middle value of the ith class and c is the width of the class interval.

Marks of the students in a particular subject of a class are given below. 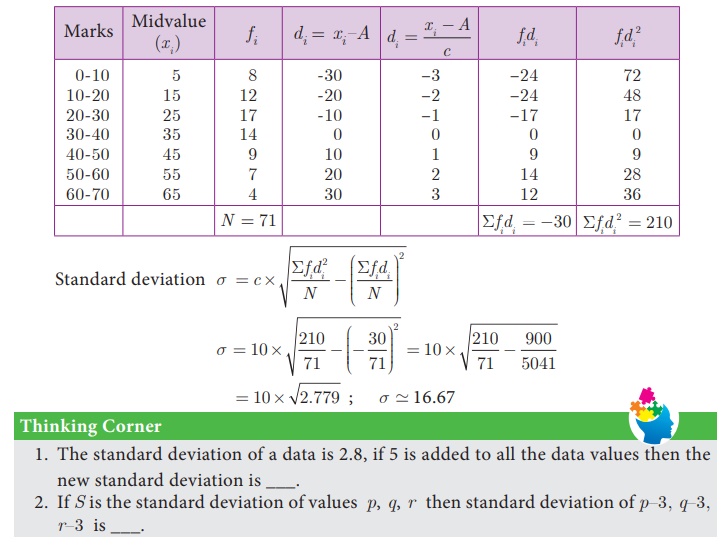 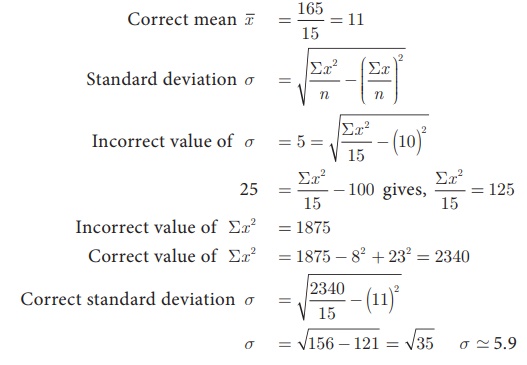