Human histocompatibility antigens are also known as human leucocyte antigens (HLA), a term that is synonymous with the MHC complex. These antigens are cell-surface glycoproteins classified as type I or type II.

Human histocompatibility antigens are also known as human leucocyte antigens (HLA), a term that is synonymous with the MHC complex. These antigens are cell-surface glycoproteins classified as type I or type II. They can produce genetic poly-morphism with multiple alleles at each site, thus permitting a great deal of genetic variability between given individuals (see 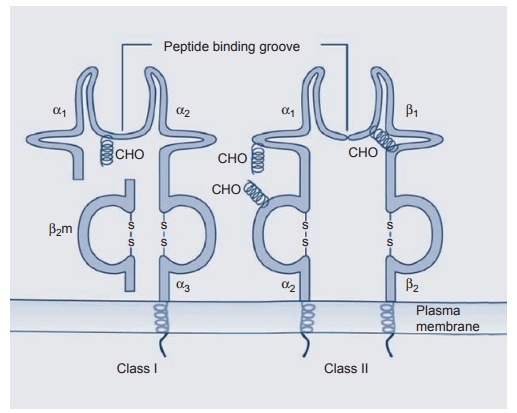 Figure 1.6 Diagrammatic representation of class I and II MHC antigens with B2 microglobulins and CHO carbohydrate side chains.

Figure 1.6). This extensive polymorphism is important when viewed in the context of an immune system that needs to cope with an ever-increasing range of pathogens. These pathogens in turn are extremely adept at evading the immune system. Thus, the battle between invading microbe and immune recognition is constant and ever changing. Recognition of antigen by T cells is MHC restricted. Therefore, any given individual is only able to recognize antigen as part of a complex of antigenic peptide and self.

The importance of this concept is under-scored by the experiments of Dougherty and Zinkernagel. Using virus-specific (virus 1) cytotoxic T cells, Figure 1.7 illus-trates their remarkable discovery. If anti-gen-presenting cells (APCs) of mouse A are mixed with T cells of mouse A in the context of virus 1 peptides, the T cell responds and kills the virus. If the MHC complex is from mouse B and the T cells are from mouse A, no killing occurs. Finally, if MHC and T cells are both from mouse A but virus 2 is unrelated to virus 1, no response will occur. 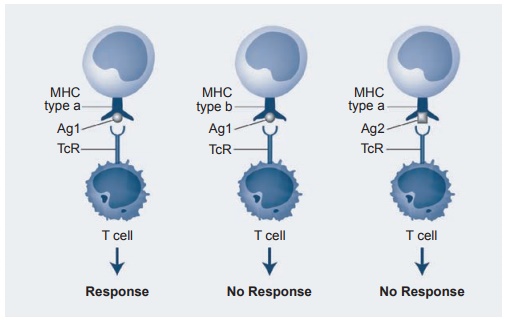 The MHC class I antigens are divided into three groups (A, B, and C), and each group belongs on a different gene locus on chromosome 6. The products of all three loci are similar and are made up of a heavy chain (45 kDa) and associated β2 micro-globulin molecule (12 kDa) gene, which resides on chromosome 12. The MHC class I antigen differences are due to variations in the α chains, the β2 microglobulin being constant. X-ray crystallography studies have shown that as few as nine amino acids can be tightly bound in the α chain groove.

MHC class II antigens also exhibit a similar structure with the groove being formed by the α1 and β1 chains. Unlike class I antigens present on most nucleated cells, the class II antigens are restricted to a few types: macrophages, B cells, and acti-vated T cells. In humans, there are three groups of class II antigens: namely, HLA-DP, HLA-DQ, and HLA-DR.

Depending on the nature of the anti-gen (endogenous or exogenous), the MHC response is different. For example, endog-enous antigens (including viral antigens) are presented by MHC class I antigen cells exclusively to CD8 cells. The endogenous antigen is first broken down into small pep-tides and transported by shuttle proteins called Tap I and Tap II to the endoplasmic reticulum. There they complex with MHC class I molecules and are delivered to the cell surface for further processing to the CD8 cells.

In contrast, MHC class II molecules are held in the endoplasmic reticulum and are protected from binding to peptides in the lumen (not human) by a protein called MHC class II associated invariant chain.

Finally, there are class III antigens, such as complement components C4 and C2, plus certain inflammatory proteins, such as tumor necrosis factor (TNF), which are encoded in adjacent areas.