Functional Components of the Immune System

Each of the cells in the immune response has a particular role to play. While many of these cells will be discussed in detail in subsequent, a brief review of the functional capabilities is presented here.

FUNCTIONAL COMPONENTS OF THE  IMMUNE SYSTEM

Each of the cells in the immune response has a particular role to play. While many of these cells will be discussed in detail in subsequent, a brief review of the functional capabilities is presented here.

These cells may be divided into two main groups: the dendritic cell and the mature macrophage. The dendritic cell’s major function is to present antigen to the lym-phocyte, and it is the earliest cell to recog-nize foreign antigen.

There are two forms of dendritic cells: immature and mature. The induction of an adaptive immune response begins when a pathogen is ingested by an immature den-dritic cell. These cells reside in most tissues and are relatively long-lived. As seen in Figure 1.1, they are derived from the same cell myeloid precursor as the macrophage. This immature cell carries receptors on its surface that recognize common features of many pathogens such as cell wall carbo-hydrates of bacteria. Once the bacterium is in contact with these receptors, the den-dritic cell is stimulated to engulf the patho-gen and degrade it intracellularly. These cells also continue engulfing extracellular material (both viruses and bacteria) by a receptor-independent mechanism of mac-ropinocytosis. Once accomplished, the main function of the “activated” dendritic cell is to carry pathogenic antigens to the periph-eral lymphoid organs to present them to T lymphocytes. Once arrived, the dendritic

cell matures into an APC, which now permits it to activate pathogen-specific lymphocytes. Another function of activated dendritic cells is to secrete cytokines that influence both the innate and adaptive immune responses. 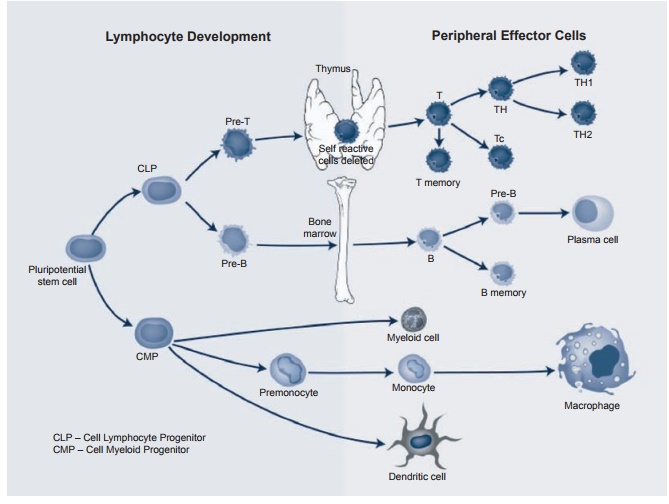 Figure 1.1 Development and differentiation of lymphocytes from pluripotential stem cells.

The primary function of these mono-nuclear cells is to phagocytose invading organisms, dead cells, immune complexes, and antigens. To do this, these cells are equipped with powerful lyososomal granules containing acid hydrolases and other degrading enzymes. Macrophages need activation to carry out these functions. These include cytokines, which can bind to IgG: Fc receptors or most importantly (as we shall see later) receptors for bacterial polysaccharides. In addition, they can be activated by soluble inflammatory prod-ucts such as C5a. In turn, the macrophages can release monokines, such as TNF or IL-1, which increase the inflammation in inflamed tissues.

These circulating cells also play an impor-tant role in the body’s defense against infection. These cells produce adhesin molecule receptors, permitting them to adhere to and migrate from the blood vessels to the site of infection. They are attracted to the site by IL-8, C3a, and C3b, cytokines released by TH1 cells, and finally factors produced by mast cells. These cells are also phagocytic cells, and the process of phagocytosis is similar to that seen in macrophages. They are particularly effec-tive when the invading organism becomes coated with antigen-specific antibodies (often called opsonins) along with acti-vated complement components.

NK cells also can kill target cells in the absence of either antigen or antibody stimulation. Their lineage is not known, but they are probably in some manner related to T cells. Unlike other cells, they can be nonspecifically activated by mito-gens, interferon, and IL-12. These cells are particularly useful in the early response to viral infection. As in other cells, they have receptors on their surface that recognize particular ligands. For example, NKR-PI is a lectin-like receptor that recognizes carbo-hydrate moieties on target cells, which ini-tiates killing. As in other cell systems, there is also an inhibiting receptor called KIR. This molecule binds to ligands on MHC class I ligands, and this prevents killing of the target cell.

NK cells are not immune cells, and they have a broad range of specificity and no real memory. Studies of animals with NK deficiencies indicate that they have a greater incidence of viral infections and malignancies. This suggests that they have broad “immunological surveillance” properties but the exact mechanisms whereby they exert those properties are not known

The use of an antibody-coated target to destroy foreign target cells is called anti-body-dependent cell-mediated cytotoxic-ity, or ADCC. This killing is dependent on the recognition by cells bearing Fc receptors and includes monocytes, neutrophils, and NK cells. These cells do not need simulta-neous recognition by MHC molecules. The mechanisms of killing most likely involve the release of cytoplasmic components of the target cells and perforin, but additional factors are also probably involved.