The major crops of India are divided into four major categories as follows:

Due to its large population, Indian agriculture is largely dominated by the food crops.

Rice is an indigenous crop. India is the second largest producer of rice in the world after China. It is mainly a tropical crop, growing mainly with mean temperatures of 24°C and annual rainfall of 150 cm. Deep fertile clayey or loamy soils are suited well for rice cultivation. It also needs abundant supply of cheap labour.

Rice in India is sown in three ways: 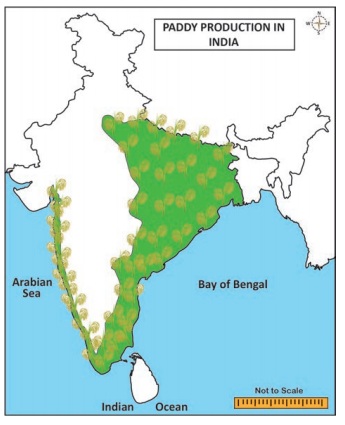 Over 85% of the India’s wheat production comes from 5 states namely Uttar Pradesh, Punjab, Haryana, Rajasthan and Madhya Pradesh. Apart from these regions, the black soil tract of the Deccan covering parts of Maharashtra and Gujarat also contribute a major wheat production. 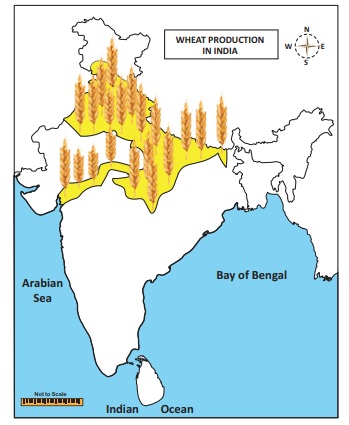 Jowar is the third important food crop of our country. It is an indigenous plant of Africa. The plant has a tendency to grow in adverse climatic conditions. Its grains are rich in carbohydrates, protein, minerals, and vitamins. Hence, it provides cheap food to the large section of the poor population. It is also used as fodder in many parts of the country. Jowar is essentially a crop of the Peninsular India. Maharashtra, Karnataka, and Madhya Pradesh are the leading producers of Jowar.

Bajra is an indigenous plant of Africa. This forms the staple food for poor people. Its stalks are used as fodder for cattle and for thatching purposes. Bajra is a crop of dry region. Rajasthan is the largest producer of bajra followed by Uttar Pradesh, Haryana, Gujarat and Maharashtra.

Barley is one of the important cereals of our country. Besides, being poor man’s diet, it is used for making barley water, beer and whiskey. Rajasthan and Uttar Pradesh are the two leading producers of Barley.

Pulses include a large number of crops which are mostly leguminous and rich in vegetable protein. They are used as human food and feeding cattle. They fix atmospheric nitrogen in the soil and hence are usually rotated with other crops. India is the largest producer of pulses.

The crops which are cultivated for commercial purpose are called cash crops. These crops include sugarcane, tobacco, fibre crops (cotton, jute, and mesta) and oilseeds. 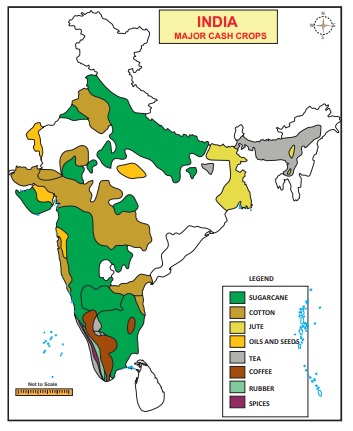 It is the second largest producer in the world. This crop provides raw material for the sugar industry which is the second largest industrial category of our country. Besides providing sugar, gur and khandsari, it supplies molasses for alcohol industry and bagasse for paper industry. India is ranked third in sugar production in the world after Cuba and Brazil. At the state level, Uttar Pradesh is the leading producer of sugarcane followed by Maharashtra, Karnataka, Tamil Nadu and Gujarat.

Cotton is the most important cash crop of India. It provides raw material to the largest industry of India. India ranks second next to China in the production of cotton.

About 79% of the total area and production in the country were contributed by four states viz., Gujarat, Maharashtra, Andhra Pradesh and Punjab.

It is a tropical fibre crops, grows well in the alluvial soil. It provides raw material for Jute industry. It is used for manufacturing of gunny bags, carpets, hessian, ropes and strings, rugs, clothes, tarpaulins, upholstery etc. West Bengal is the leading state both in cultivation and production of jute. The other cultivators of jute are Bihar, Assam and Meghalaya.

Tea is an evergreen plant that mainly grows in tropical and subtropical climates. Tea is a labour intensive and grows faster under light shade. Tea plants require high rainfall but its root cannot tolerate water logging. Two major varieties of tea are cultivated in India. They are

i) BOHEA - originated from China

A number of hybrid varieties have been developed by mixing these two. India is the second largest producer of tea after China in the world. Assam is the larger producer of tea in India. Other states are Tamil Nadu, Kerala and West Bengal.

Coffee is grown in shade and it grows effectively in the altitudes between 1,000 and 1,500 m above mean sea level. There are two main varieties of coffee. They are

Rubber plantation were first established in Kerala in 1902. It needs hot and wet climatic conditions (temperature above 20°C and rainfall above 300cm). Most of the land under rubber belongs to small land holders. The major rubber growing areas are Tamil Nadu, Kerala, Karnataka and Andaman and Nicobar Islands.

India has been world famous for its spices since ancient times. These spices mostly used for flavouring or tampering cooked food and for preparing medicines, dyes etc. Pepper, chillies, turmeric, ginger, cardamom, clove and areca nut are the major spices cultivated in India. Kerala is the leading producer of spices in India.